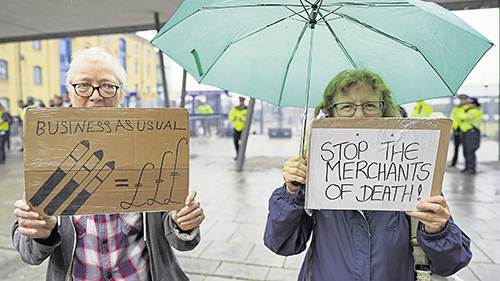 As part of the two weeks of protest against the Defence and Security Equipment International (DSEI) arms fair held in London’s ExCeL Centre, Stop the Arms Fair organised a Festival of Resistance on 11 September. They were joined by activists from Extinction Rebellion (XR), Campaign Against the Arms Trade (CAAT), Trident Ploughshares and others – there were even jointly-produced flyers available in the information tent (along with copies of PN). The XR activists I talked to all spoke of the environmental damage caused by the arms trade being their motivation for attending.

Stop the Arms Fair joined with Demilitarise Education (dED_ucation) to host a ‘Bike Rave’. Activists circled DSEI on their bicycles, with music, for two hours in a bid to disrupt the setting up of the arms fair. Musical choices included Rage Against The Machine’s ‘Killing in the Name of’ and NWA’s ‘Fuck tha Police’.

CAAT, dED_ucation and Stop the Arms Fair also joined together to host a Digital Conference at the Gates, facilitated on Zoom. The focus this year was on promoting understanding among science, technology, engineering and maths (STEM) students and graduates of the ways in which the arms trade relies on their skills.

Speakers included Stuart Parkinson from Scientists for Global Responsibility, Myriam Kane (formerly of the National Union of Students) and activist and rapper Lowkey.

Green Party councillor Sian Berry told the Festival: ‘This is a place where the worst business in the world is conducted.... It is a stain on our city every two years and it has to stop.’

She later told me that a decade ago the policing budget for DSEI was approximately £1.2m. By 2019, it had risen to £3.8m. The explanation given for this tripling of the budget was ‘intelligence of more protests’, at the expense of the UK taxpayer. She also told me that officers are recruited from every London area to protect DSEI.

The live music at the Festival of Resistance included classical, a capella, punk and bluegrass. Despite the carnival atmosphere of the Festival, the event was extraordinarily heavily policed.

At one stage, I counted as many police officers in attendance as there were activists – roughly 100 of each. The beginning of the event was delayed for two hours. An organiser told me this was because of police searches of their equipment.

Because of the ‘difficult’ attitude of the police, the same organiser gave a speech ensuring all attendees know their legal rights and letting them know that bust cards were available at the information tent.

Citing a ‘Section 3 cordon’, the police refused to allow Festival attendees, including the press, those with visible disabilities and small children, to cross the road between the information tent and the stage. Instead people were made to walk a quarter of a mile alongside the busy Royal Albert Way, with no accessibility considerations given and no proper pavement.

One of the police officers I spoke to did not know what the world ‘ableist’ meant, raising questions about the quality of police equality and diversity training.

One of the Festival’s speaker’s engaged attendees in a ‘privilege walk’. Volunteers took a step forwards or backwards, depending on various questions asked: ‘if you grew up in an area with high crime step backwards’, ‘if you can show affection for your romantic partner in public step forward’, and so on. At the end of the exercise, Remy Dhami, 22, a woman of colour and member of the LGBT+ community, was left far behind the other participants. She said: ‘I didn’t grow up poor. I didn’t grow up disadvantaged, but I did, because I’m this colour.’

At 6.31pm, the HMS Argyle, a British navy type 23 frigate, was towed in, again at the taxpayer’s expense.

Peaceful protesters locked-on to one of the temporary gates into DSEI. The police responded with force. I saw them attempt to push the gates over, onto the protesters. I also saw male Metropolitan police officers shoving female protesters, shouting with batons drawn to strike and purposefully destroying a protesters’ property. They finally arrested protesters at 7.16pm.