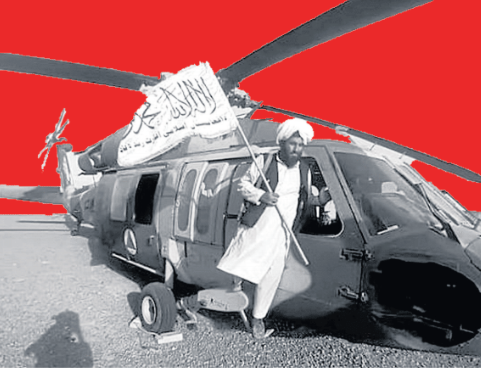 Unsurprisingly then, while there has been a huge amount of media coverage of the US-UK-NATO withdrawal from Afghanistan, lots of important information has not been presented to the British public.

Having supported the most fanatical elements of the mujahideen guerrillas fighting Russian forces in Afghanistan in the 1980s, the US and UK returned numerous warlords to power after they invaded and occupied the country in October 2001.

Hamid Karzai became president following ‘deep political manipulation by the US’ (James Ingalls and Sonali Kolhatkar, Bleeding Afghanistan: Washington, Warlords, and the Propaganda of Silence, Seven Stories, 2006). The CIA dropped off ‘wads of American dollars packed into suitcases, backpacks and, on occasion, plastic shopping bags… every month or so’ to his office for over a decade (New York Times, 28 April 2013).

However, it wasn’t Karzai who held power when Afghanistan was building new governing institutions in the 2000s but the US special presidential envoy for Afghanistan, Zalmay Khalilzad, ‘dubbed the viceroy, or the real president of Afghanistan’, according to a 2005 BBC report.

‘The US government and its allies promised our people democracy, but imposed upon them the most undemocratic, corrupt, and mafia government of our history,’ explained the Revolutionary Association of the Women of Afghanistan (RAWA) in 2013.

The presence of US-UK-NATO forces fuelled the insurgency

‘Before the British burst onto the scene [in 2006], Helmand was “stable” in the sense that there was almost no Taliban presence and little prospect of any,’ observes Frank Ledwidge, a British military intelligence officer who worked in Afghanistan (Investment in Blood: The True Cost of Britain’s Afghan War, Yale University Press, 2013). Ledwidge goes on: ‘After three years of British presence, the province was the most savage combat zone in the world.’

Academics Theo Farrell and Antonio Giustozzi came to a similar conclusion after interviewing elders and 53 Taliban fighters from Helmand, noting that the British deployment ‘became a magnet, drawing Taliban in from surrounding districts and provinces’ (International Affairs, July 2013).

This connection was confirmed in a 2012 report from the Afghanistan NGO Safety Office. The report explained that disengagement by international military forces ‘is the cause of AOG [Armed Opposition Group] de-escalation – not the other way around – as by removing themselves they remove the key driver of the AOG campaign.’

‘We’ve said we’ll be different to the Americans who were bombing and strafing villages, then behaved exactly like them.’ That’s what Leo Docherty MP, who fought as a British officer in Afghanistan, told the Sunday Times in September 2006.

The US-UK-NATO reliance on air power has had deadly consequences for Afghans, with children making up 40 percent of all civilian casualties from airstrikes, according to United Nations data for the last five years (Action on Armed Violence analysis, 6 May 2021).

Colonel Richard Kemp was commander of British forces in Afghanistan in 2003. Speaking in 2009, Kemp noted that the UK military deployed the incendiary, white phosphorus, ‘even in areas that do have a certain amount of civilian population’ (The World Tonight, 23 February 2009), while US forces wiped out three villages – Tarek Kolache, Khosrow Sofia and Lower Babur – in Kandahar in 2010 (Wired, 2 January 2011).

‘We ended up killing a lot of people, destroying lots of bazaars and mosques’, general David Richards, the UK chief of defence staff 2010–2013, admitted about the early part of the British deployment (Sandy Gall, War Against the Taliban, 2012).

Ledwidge estimates that British forces ‘killed thousands of non-combatants in Helmand’ (Guardian, 6 September 2021), while the Internal Displacement Monitoring Centre, an affiliate of the Norwegian Refugee Council, reported that about 730,000 people were displaced between 2006–2010, mostly due to military operations by US-NATO forces (the UN news agency IRIN, 21 April 2011).

‘The presence of foreigners, particularly the British, whose injudicious use of firepower was reminiscent of Soviet military operations, made funding and recruitment non-issues’ for the Taliban. That’s the opinion of Mike Martin, a Pashto speaker who spent two years in Helmand as a British army officer (from his book, An Intimate War: An Oral History of the Helmand Conflict, Hurst, 2014).

Leo Docherty MP, quoted above, estimates that in the first 18 months of the British deployment, 6,000 people were killed in Helmand (Ledwidge, Investment in Blood). Areas would be ‘cleared’ again and again – ‘just like mowing a lawn’, writes Ledwidge: ‘One reason these “Taliban” returned was that they were, in fact, local farmers and they had nowhere else to go; they were defending their homes against foreigners.’

“The British deployment in Helmand became a magnet, drawing Taliban in from surrounding districts”

Adam Holloway MP, who also served in Afghanistan with British forces, echoed Ledwidge’s analysis, noting that ‘most of’ those who we call the Taliban are ‘the sons of local farmers… approximately 80 per cent of those we call the enemy die within 20 miles of where they live’ (Independent, 21 February 2010).

With recruitment largely voluntary, Farrell and Giustozzi note that ‘Taliban interviewees… described forming what we might call “pals platoons”.’

Appearing on BBC Any Questions in August 2021, James Heappey, the minister for the armed forces, described the war in Afghanistan as a ‘success’ because ‘in the 20 years that have followed [the 9/11 attacks] there have been no international terrorism attacks from Afghanistan into the West’.

In reality, the US-UK intervention has inspired terrorist attacks in the West.

In his martydom video, Shehzad Tanweer, one of the suicide bombers in London on 7 July 2005, said: ‘What you have witnessed now is only the beginning of a string of attacks that will continue and become stronger until you pull your forces out of Afghanistan and Iraq and until you stop your financial and military support to America and Israel’.

Similarly, Michael Adebolajo was clear why he killed off-duty British soldier Lee Rigby in London in 2013, telling a bystander: ‘I killed him because he kills Muslims over there and I am fed up that people kill Muslims in Iraq and Afghanistan.’

Indeed, the UK government itself has long understood that the war in Afghanistan heightens the terrorist threat to the West, with the home office and the foreign office warning in 2004 that a major driver of ‘extremism’ among young British Muslims was ‘a perceived “double standard” in the foreign policy of western governments’. The joint study went on: ‘the war on terror, and… Iraq and Afghanistan are all seen by a section of British Muslims as having been acts against Islam’ (see PN 2537).

There is evidence that the British public’s anti-war feelings restrained the UK military in Afghanistan to some extent (see PN 2644 – 2645). However, the anti-war movement has been unable to exert decisive pressure on UK policy.

One thing that would likely increase opposition to the war in Afghanistan – and, importantly, future UK wars – would be if damning facts like those presented above were better known. This is something the government and military are actively trying to stop, which means spreading this information should be a key task for peace activists.