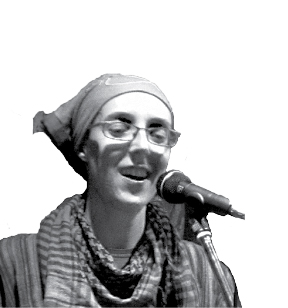 Here in Scotland, a year later than expected, COP26 is nearly upon us. As the global climate emergency worsens before our very eyes, world leaders will gather to discuss their collective priorities and plan for action (or inaction).

While the pandemic has amplified the unequal access to this forum for those communities who are most affected, there are many challenges to the COP structure that I’m sure will be addressed by others.

But for grassroots climate activists, it’s another opportunity to educate people in our local and global communities and try to shift those people towards action.

It is another opportunity to campaign and sing out.

The ‘Let it Grow’ project is a collaboration between Oi Musica, Karine Polwart and Soundhouse Choir that calls out to community music groups to learn and share a new song. Entitled ‘Enough is Enough’, the song speaks partly from the perspective of the planet we inhabit (‘I give you all I have but you always want more’) as well as from the perspective of we who live on it (‘Wherever there’s a tree that never grew, we will let it grow’).

‘Music Declares Emergency’ is a group of artists and music industry professionals who have come together to use their collective voices to reach more ears. Any person or group can sign the Music Declares Emergency declaration. The group believes that: ‘The continued rise in greenhouse gas emissions and the ongoing devastation of the natural world constitute a clear and present threat to life on Earth.

‘... an immediate governmental response is necessary to protect all life from climate and ecological catastrophe.

‘Music, musicians and music businesses, through their unique cultural and economic power, can lead the way in demanding the systemic changes required to secure all life on earth.”

Music Declares Emergency are encouraging choirs to sing an arrangement of Louis Armstrong’s ‘Wonderful World’ to help spread the message to new ears.

“Musicians through their cultural and economic power, can lead the way in demanding the changes required to secure all life on earth.”

‘Somos Todes’ is a new song written via Zoom by an international group of songwriters in collaboration with activists in Putaendo in Chile. Their community is resisting a copper mine being constructed by a Canadian company, Los Andes Copper.

The song speaks in Spanish and English about the need for global solidarity to effectively fight the corporations (‘No north, no south, under one blue sky’) as well as our relationship to the earth and each other (‘Somos todos, todas, todes – we are all’).

The writing and sharing of the song with different groups has exposed more people to the story of Putaendo and the voices of those living and resisting there.

One of the things that these songs all have in common is the recognition that we humans are interconnected with the planet we live on.

There are simple pleasures we can enjoy such as ‘skies of blue’ or ‘the colours of the rainbow’; the simplicity of ‘we are the earth’ or ‘we are the water’.

There are simple commitments such as growing trees (‘Wherever there’s a tree that never grew, we will let it grow’) and there are actions of campaigning such as ‘Out, out, Los Andes Copper!’

We need them all.

We need to sing and connect with each other and the planet that sustains us and we need to pressure the governments and corporations to change their collective behaviour.

Enough is enough. Somos todes (we are all). What a wonderful world.

Penny Stone is a songleader, teacher, singer and composer.

You can hear ‘Somos todes’ on Penny’s website: www.tinyurl.com/peacenews3652