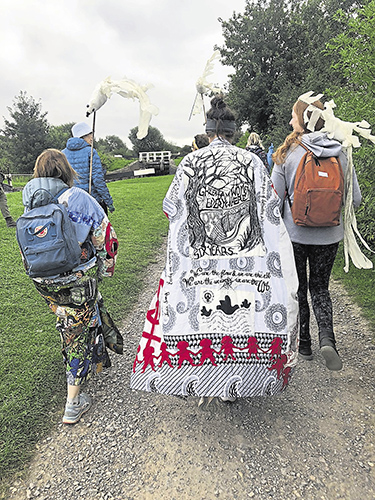 In August and September, Greenham Women Everywhere organised a recreation of the original 1981 march from Cardiff to Greenham Common by ‘Women for Life on Earth’. PHOTO: GREENHAM WOMEN EVERYWHERE

Here is an excerpt from Vanessa’s contribution:

After having listened to everybody, I’m, like: ‘How do I even come in here?’

When Greenham Common Women’s Peace Camp was starting in September 1981, I was a young 17-year-old, sitting in a very cold jail cell [in South Africa] under Section 6 of the Terrorism Act, so I knew absolutely nothing, obviously, about Greenham.

I only got to know about Greenham many, many, many years later.

Believe me, I would have loved to have been part of that. It would have just made my year – or probably decade.

What I found fascinating is the fortitude of the women at Greenham because I’ve been part of many ‘campaigns’ as we call them here. We do them outside parliament, we’ve done them with the World Conference Against Racism in Durban, we’ve done them with the World Summit on Sustainable Development, and in other spaces in Africa, for almost two decades.

I am still flabbergasted. I salute you all. It’s amazing what you’ve done and obviously also to bring very much into the the public domain the issue of nuclear proliferation and what it can do.

In terms of Women in Black... in 2001, a World Court of Women Against War For Peace was held in Cape Town.

As part of that, there was a Women in Black demonstration in Cape Town. I think we were about seven thousand. Like all Women in Black vigils, it was supposed to be silent, but there’s no way you keep South African women silent at a demonstration. I mean, really.

We were singing and dancing and shouting our slogans and we closed off one of the two main highways out of the city. We just closed it down. We were in the streets and we were performing.

I remember Celine from Women in Black India coming to me and saying: ‘Can you please help? Talk to your people to calm them down, to get them back onto the pavements and be silent, and just hold the posters.’

So that was my first engagement with Women in Black, a very powerful engagement, I loved it. Over the years, I participated in a few others around around the globe.

Let’s fast forward here to 2007, when I took a group of young students to the World Social Forum in Nairobi, Kenya. We’d been there already a couple of weeks because there were some feminist conferences and workshops.

As part of one of the events we attended, one evening, there was a Women in Black vigil in the main sports stadium in Nairobi.

Some of the young students were so moved by what they experienced there, all these women silent with these posters giving their messages. When they came back to South Africa, they said they wanted to form a South African chapter of Women in Black because they felt it was so powerful.

They said that’s exactly why we need to do this because we are never silent. Imagine how powerful it would be if we had a group of Women in Black with these posters standing and not saying anything – because South African women just don’t know how to be silent!

It grew among students – not all of them were students, obviously, there were many working women – but the core, the organizing group, was students because they had more time.

There were some of them from other parts of Africa as well, so it wasn’t just South African people. They were from Rwanda, from Kenya, from Uganda, from Zimbabwe, from all over and they took it back to those areas once they left the university.

So that was basically my involvement with Women in Black.

As for peace activism, well, I think all feminists are peace activists. I wouldn’t say I was a very peaceful youngster.

I used to always say to my grandmother growing up: ‘Ach, Ma,’ – you know, because we’d go out and demonstrate and we’d be beaten up and just terrible things, and I just said to her: ‘You know, Ma, I don’t think that you should say we must be more peaceful, we must be more peaceful.’ Because I used to be so angry and I said: ‘But there’ll never be peace until the last one of them or the last one of us is dead!’ And she said: ‘No, no, no, no, you can’t say that because you can’t beat evil by doing evil and violence is evil.’

And so I had to learn my grandmother’s peaceful ways over time.

But also, as I understood feminism more, I understood that all feminists are peace activists because, in a world where the vilest forms of violence have been projected on women’s bodies in the name of peace, democracy, progress, prosperity, in the name of the pursuit of happiness, and so-called social cohesion, this is what has been done to us, you cannot be a feminist and not be a peace activist.

That’s where we’re at. Unfortunately, the last two years, we haven’t done a lot of Women in Black activities. We want to do one at least every month. We normally go to taxi ranks, where the most gross form of violence against women is perpetrated in South Africa, along at train stations, all these spaces where women are constantly violated.

The past two years, because of COVID-19, we haven’t really been able to do it and we’re hoping that, should we all get vaccinated or at least obtain some form of ‘herd immunity’ by the end of the year, we can start again with our activism at least by March next year.

In August and September, Greenham Women Everywhere organised a recreation of the original 1981 march from Cardiff to Greenham Common by ‘Women for Life on Earth’. PHOTO: GREENHAM WOMEN EVERYWHERE

Vanessa Ludwig told the organisers of the Weaving the Web/inar that she wanted to be introduced as an ‘African feminist who continues to work towards the dream she had as a “young revolutionary in the struggle” in the 1980s for a free Afrika and a peaceful just world’.

You can see the whole Web/inar on YouTube: www.tinyurl.com/peacenews3658. The Greenham Women Everywhere website contains audio interviews with Greenham Women, written testimonies, a visual archive and much more: greenhamwomeneverywhere.co.uk