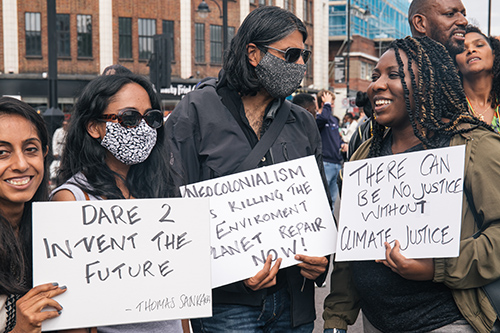 The actions mostly focused on disrupting the heart of finance in the UK, the City of London, though there were also occupations of the Science Museum, Oxford Circus, and (in Woking) the offices of the World Wildlife Fund (WWF), the global conservation charity.

The Metropolitan police said, ahead of the protests, that their approach to arrests would not be affected by the supreme court’s recent ruling that highway obstruction as part of a protest could be lawful (see PN 2655). Around 500 arrests were made.

XR later summed up the fortnight this way: ‘We’ve brought junctions at Tower Bridge, London Bridge, Cambridge Circus, Cromwell Road, Long Acre and Covent Garden to a standstill. We replaced these places’ endless urban grind with our urgent message, displaying once again how facing up to ecocide can be scary and sad and inconvenient, but how it can also create the space for colour and joy and togetherness.... Police used massive numbers, dubious procedure and sometimes outright violence to move us on, but this week we showed we’ve really learned to “be like water”. Occupations repeatedly turned into marches (and marches into occupations!); we’ve seen localised blockades of banks and government departments, marches, rallies, carnivals, fasting, feed-ins, die-ins, sleep-overs in both McDonalds and the Natural History Museum, an occupation of St Paul’s, and exciting new heights of mobilisation by Digital Rebellion.’