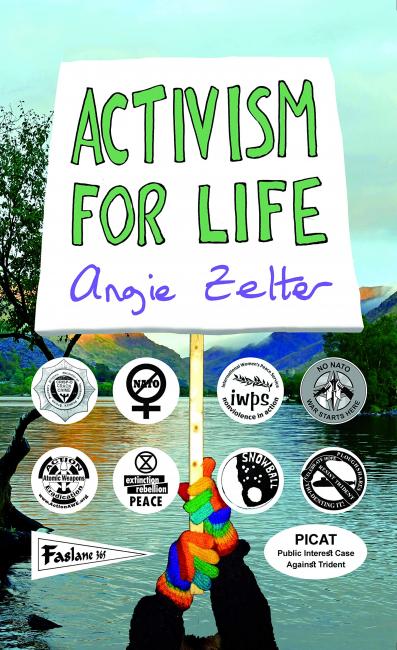 As she recounts her own experiences, Zelter calls for actions to be accessible to everyone, to reach out to a range of groups and to be enjoyable and motivating.

When participants explain their involvement in direct action to friends and family, messages are shared widely.

A good example was ‘Wool Against Weapons’, in which groups across the country knitted a giant pink scarf that stretched from one nuclear bomb factory (AWE Burghfield) to another (AWE Aldermaston).

I met all sorts of people on that action who had knitted sections. Later, I came across the scarves again, turned into blankets at a house for homeless asylum seekers.

We also read of episodes in which Zelter shows extraordinary personal courage and endurance: joining direct action campaigns and setting up groups in Malaysia, Palestine and South Korea, as well as enduring months in prison far from home.

On her return from a trip to Sarawak, Malaysia, in solidarity with the Penan people, she was inspired to build a UK network to save ‘old-growth’ forests, and to demand responsible sourcing of hardwood by timber companies.

This campaign taught her that, to be effective, direct action must be sustained over time, must have clear demands, and must be accompanied by public education and lobbying.

For anyone planning on taking part in nonviolent direct action, the substantial second half of the book offers many useful resources. There is a list of ‘Lessons Learnt’ as well as models of nonviolent behaviour, ways to avoid unnecessary risks, and examples of the kind of documents to prepare in advance.

A generous number of black-and-white photographs illustrate the progression of Zelter’s activist career, right up to ringing cowbells during COVID restrictions to celebrate the coming into force of the Treaty on the Prohibition of Nuclear Weapons in January 2021.

While Zelter’s account does trace developments in her approach, there isn’t much reflection or analysis in the narrative.

She writes that she faced criticism from other groups when she returned from Sarawak, but we never learn what that was.

While her campaigning has involved prison, months of travel and burnout, Zelter only refers to the effect it had on her family life and on her own mental health in the final acknowledgements.