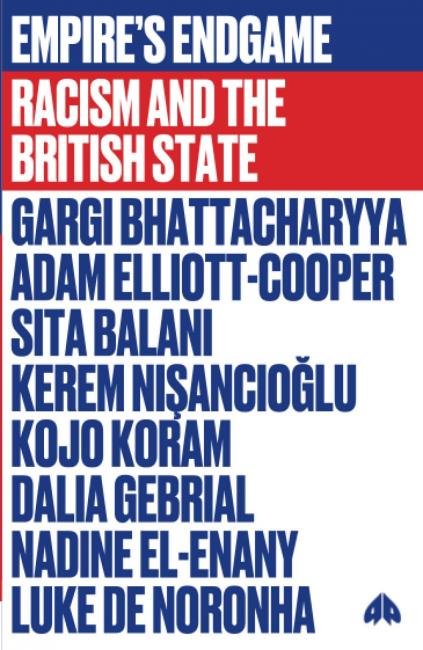 Over the past year, there has been an astonishing awakening, especially among young people, to the reality of racism in Britain. But while radical anti-racist politics has certainly been growing, there is still a widespread perception in the UK that racism is uniquely a disease of the United States.

Activists have been accused of ‘importing’ a US language of race into a British context. The accusation has come not just from the far right, but from people from across the political spectrum. It’s not exactly uncommon to hear someone say: ‘There might be some racists here and there, but we’re not as bad as the Americans!’. To those people, I would suggest reading Empire’s Endgame.

This book is a powerful intervention into current debates about race and capitalism and their relationship to state power.

Written collaboratively by eight of the UK’s leading anti-racist writers and activists, Empire’s Endgame offers a compelling account of the construction and reconstruction of race in Britain. It shines an illuminating light on vital contemporary issues from the Windrush scandal to the so-called ‘knife crime epidemic’, from ‘progressive patriotism’ to the rise of the radical right.

The authors offer an astute and critical analysis of how the shifting practices of the security-oriented British state have shaped British capitalism’s relationship to race in an era of post-imperial and post-industrial decline.

The text carries the reader on a journey through the contemporary landscape of race, exploring how racial categories have been constructed and shaped by ideas of criminality and scandal, nationalism, gender and militarisation.

We meet a number of reoccurring characters – the racist ‘folk devils’ such as ‘the immigrant’, ‘the gang’ and ‘the black youth’ – that haunt our public conversation.

Empire’s Endgame offers us an anti-racist politics that emphasises the historical nature of the relationship between race and state power. It is a vital corrective to liberal anti-racism(s) that focus on the visibility of Black people in the media, sports and so on – the politics of representation.

Instead of analysing race as historically ‘fixed’ and immutable, the authors emphasise that it is constantly changing character. They try to make sense of the forces that have shaped our understanding and experience of race.

With the recent blossoming of anti-racist and anti-policing activism in the UK, this book could not have been published at a better time. It offers a clear, nuanced and accessible guide to contemporary racism in Britain that should be read carefully and widely by activists across the country.