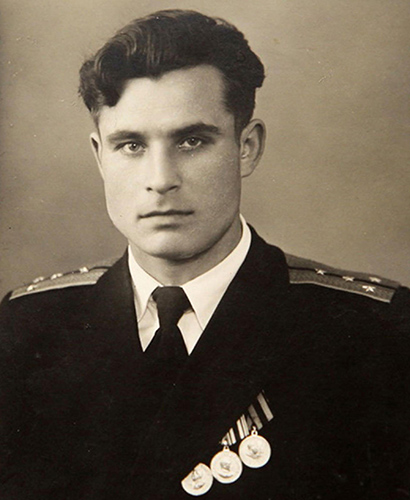 Nine years ago, we wrote about a Russian naval officer named Vasili Arkhipov who saved the world.

We’ve learned since then that the story of Arkhipov’s role in the Cuban Missile Crisis was a little more complicated than we thought. Even so, it is clear that Arkhipov played a key role in preventing a confrontation at sea turning into global nuclear war.

On 27 October 1962, 12 US warships surrounded a submerged Soviet submarine, the B-59, a began dropping hand grenades and practice depth charges.

The US warships, led by the anti-submarine warfare aircraft carrier, the USS Randolph, were part of the US blockade of Cuba during the Cuban Missile Crisis. Their mission was to halt Soviet vessels on their way to Cuba, to search them, and to seize ‘offensive weapons and associated matériel’.

The US naval forces had no legal right to stop ships or submarines travelling to Cuba, or to search them, or to confiscate any items from them. The blockade (called a ‘quarantine’ by the US) was, in fact, an act of war.

The US government had sent a message to the Soviet authorities, probably on 24 October, explaining the signal that US warships would send to unidentified submerged submarines that they should surface and identify themselves. The ships would drop four or five (harmless but loud) practice depth charges and send a sonar signal, ‘IDKCA’.

This message had been passed on to the B-59 before it submerged on 25 October, hunted by US warships, after which time it had been unable to communicate with the outside world. The trouble was that it was very difficult to tell the difference between practice depth charges and actual depth charges designed to destroy them.

As the batteries ran low and temperatures reached unbearable levels of heat, after two days of being submerged and chased, the captain seems to have been reaching breaking point. The last news the crew had received, on 25 October, led them to believe that war between the US and the Soviet Union could be just about to begin, or had already begun.

From that point of view, the depth charges they heard could be an attack, part of the wider US war effort.

According to the best-known account of what happened, captain second rank Vitali Savitsky screamed: ‘Maybe the war has already started up there, while we are doing summersaults here. We’re gonna blast them now! We will die, but we will sink them all – we will not become the shame of the fleet.’

Savitsky summoned the nuclear torpedo officer to the control room and ordered him to prepare the weapon for firing.

Savitsky, in this version, was restrained mainly by second captain Vasili Alexandrovich Arkhipov, who persuaded him to surface instead. Savitsky needed the agreement of Arkhipov and the deputy political officer, Ivan Semenovich Maslennikov, to fire the weapon. Arkhipov refused to allow the torpedo to be fired.

What the US warships did not know, and what the wider world did not know until it was revealed at a history conference in Cuba in 2002, was that the B-59 had onboard a torpedo with a nuclear warhead.

The sub could have used that torpedo to destroy an aircraft carrier and sink many of the other ships hunting it. Savitsky would also have triggered the global nuclear war that he thought, for a moment, had already started.

This version of events was related in 2002 by Vadim Orlov, who was a signals intelligence officer on board the B-59 that day.

Since then, more accounts have received attention. In Nuclear Folly (reviewed on pp16 – 17), US historian Serhii Plokhy shines a light on the memories of the sub’s navigator, Viktor Mikhailov, and the officer responsible for the torpedo launchers, Anatoly Leonenko.

According to Plokhy, both Mikhailov and Leonenko agree that Savitsky did indeed order the nuclear torpedo to be prepared for firing – and that he then changed his mind and agreed to surface the sub.

When it had risen to the surface, Savitsky, Arkhipov and the sub’s signals officer (carrying a signalling searchlight) went up the conning tower to the signalling area. The B-59 started up its diesel engines and began to recharge its exhausted batteries.

A US submarine-hunter P-2 Neptune aircraft then flew by, shining its searchlight onto the B-59 and firing tracer bullets close to it. The gunfire was so loud it made conversation impossible in the control room, according to Leonenko.

Plokhy quotes Gary Slaughter, who was a US seaman, a signaller, on the nearby destroyer, USS Cony. (The Cony had taken part in the Bay of Pigs operation the previous year, by the way, leading the invasion force into the bay.)

Slaughter remembers that the Neptune then ‘dropped several incendiary devices to activate his photoelectric camera lenses’, giving off ‘blinding’ flashes over the submarine.

Captain Savitsky, believing he was under attack, scrambled down to the control room and ordered the nuclear torpedo to be prepared for firing in torpedo tube 1, aimed at the Cony.

According to Leonenko, there was then a huge stroke of luck.

The signals officer was descending after Savitsky but got stuck in the conning tower with his searchlight.

Arkhipov, still on the signalling bridge, was able to see a message being transmitted. The captain of the Cony, commander William Morgan, had ordered Gary Slaughter to use his flashing light to signal an apology for the Neptune’s aggressive behaviour.

Akhipov shouted down to the control room, ordering Savitsky to stop preparations for firing. The Soviet signals officer was then instructed to acknowledge the apology. Slaughter ‘nodded’ his captain’s thanks for the patience shown by the Russians. The B-59 ‘nodded’ back. The torpedo tube doors were closed and the submarine pulled away to the east, away from Cuba.

It’s not clear that the stories told by Leonenko and Mikhailov actually contradict the more famous one told by Orlov.

All three Soviet officers agree that Savitsky ordered the nuclear torpedo to be prepared for firing while they were still submerged, and that he then changed his mind and ordered the sub to surface.

We know that Savitsky had to have the consent of the other two senior officers on board to actually fire the torpedo. It still seems likely to us Arkhipov had an important part in changing Savitsky’s mind, as Orlov says.

Thomas Blanton, director of the US National Security Archive, an independent archive of declassified documents, came to that conclusion in 2002. Blanton compared declassified documents and also discovered that Arkhipov did not deny Orlov’s version when it surfaced three years before his death in 1998. We don’t know for sure what Blanton would say today but, in 2002, he said simply: ‘The lesson from this is that a guy called Vasili Arkhipov saved the world.’