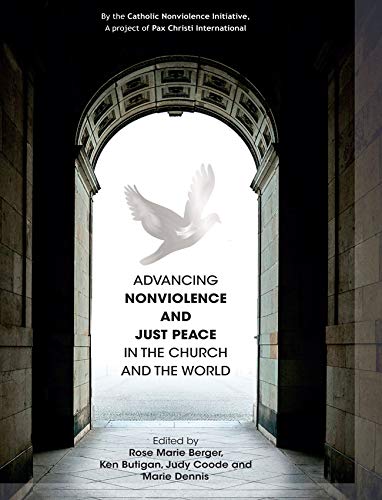 Early on in WWII my dad, already in uniform, went to the Catholic army chaplain, troubled about being a soldier. Was it right for him to participate in the war?

He was single, still living at home when war came. The Catholic chaplain assured my dad that he was fighting in a just war. For a while Dad was okay, but then he asked himself this question: ‘Are German Catholic army chaplains telling German Catholic soldiers that this was an unjust war and that they should not fight?’ Bitterly he knew they were not. At this point, betrayed, he lost faith in the church and never really recovered it.

Catholic means for everyone, thus the Catholic church was an international church, capable of seeing the big picture, yet it succumbed to nationalism in both WWI and WWII, so that Catholic killed Catholic on the killing fields of Europe. It was not until Vatican II, in the early 1960s, that it was possible to be a Catholic conscientious objector (CO).

Is there any hope for a church that persecuted ‘heretics’ for centuries, blessed torture and weapons of war, gave cover to predatory rulers through ‘just war’ teaching, implemented the inquisition, preached and urged the crusades, promoted the Doctrine of Discovery permitting European colonisation, and is currently confronted with appalling clergy sex abuse scandals? There is so much violence in Catholic history and the contemporary church.

I abandoned Catholicism 50 years ago. Imagine my surprise to learn about a new, fresh wind of hope blowing in the Catholic church called the Catholic Nonviolence Initiative (CNI). The CNI is an astonishing story of visionary, vibrant, and faithful Catholics embracing and promoting a repentant, progressive and fully inclusive form of Christianity. The CNI is a project of Pax Christi International and Pat Gaffney has reported on it recently in Peace News (December 2020-January 2021, page 11). Pat Gaffney is a Pax Christi insider and it was good to read her article. This book review is by a cautious outsider.

Pax Christi itself is a good story, and now has 120 member-organisations world-wide. It began after WWII to promote reconciliation between German and French Catholics. It was led initially by a courageous French bishop Pierre Marie Théas, who was imprisoned by the Gestapo for advocating for Jews, and Marthe Dortel Claudot, also French, a teacher and a married woman. Pax Christi has a history of strong lay women leadership, and this is part of its giftedness.

There have been two consultative conferences by Pax Christi with the Vatican for the CNI - in April 2016 and April 2019. The consultations have sought the return of the Catholic Church to the nonviolence of Jesus, and to embrace a Just Peace framework and strategy.

Just Peace is something the Protestant/Orthodox World Council of Churches already committed to in 2011. Just Peace is peace with justice, tackling climate change, economic justice, racial justice, justice for refugees, women, minorities, and nonviolence in the home. It is holistic peace, shalom peace, reign of God peace for everyone, everywhere.

The book, Choosing Peace – the Catholic Church Returns to Gospel Nonviolence, edited by Marie Dennis (Orbis Books, 2018) is an outcome of the 2016 consultation. It is an inspiring book, far better written than the World Council of Churches’ Just Peace Companion (Second Edition; Geneva: WCC; 2012). Following the April 2019 Vatican consultations another book has been produced, Advancing Nonviolence and Just Peace in the Church and the World (October 2020), the subject of this review. I was eager to read it and grateful that it had been published.

Advancing Nonviolence is both inspiring and frustrating.

Let me start with the frustrations. It feels this was a rushed job. It is written for Catholics, but it could have helpfully thought about sympathetic non-Catholic readers because its message can serve and encourage all Christians. Woefully it has no index and not all key assertions are foot noted. It helped me to understand that this is a resource book to support engagement of Catholics in the CNI, recalling Catholics to abandon the just war position for gospel nonviolence as a new default position, and advocating for Just Peace.

Once I got into it, I found it truly inspiring. For instance, I forgot I was holding a Catholic text as I read sections on the Hebrew Bible and the Christian scriptures. Its treatment of the nonviolent Jesus is beautiful and very moving. Theological themes like creation, who is Jesus, Holy Spirit, and the nature of the church are very well done. There is a very good and comprehensive review of peace studies research – creative nonviolence works and leads to much better outcomes!

The book also draws on what Catholics and others are doing in terms of nonviolence around the world, articulating a progressive and visionary form of Christianity, grounded in the realities of violence and sinful structures in our world. It takes my breath away.

What is encouraging for the CNI is that there is a trend in papal pronouncements over the last 60 years in the direction of nonviolence and just peace. Pope Francis is the latest, and most committed of all, but he stands on the contributions of Pope Benedict, Pope John Paul II, Pope Paul VI and Pope John XXIII. The present pope naming himself Francis after the saint of nonviolence, interfaith dialogue, and ecology, means something deeply significant.

This book fully confesses the violence of Catholic history, but it is helpful to remember that there is also a significant witness of nonviolence in the Catholic story: most monastic communities over 16 centuries; 100 British COs and Ben Salmon - an American union leader and CO in WWI; Dorothy Day and the ongoing Catholic Worker Movement; Austrian Franz Jägerstätter, executed by the Nazis in 1943 for being a CO; Thomas Merton; the Berrigan brothers; Oscar Romero of El Salvador, now a Saint; and countless anonymous Catholics at parish level.

Imagine if the Catholic Church, with its continuing gifts of spirituality and sacraments, was to become as creatively committed to peace and justice as Quakers and Anabaptists. What a force for good in the world that would be! The book concludes with this possibility that should gladden the heart of every peace activist reading Peace News:

The Catholic Church is like a large, sea-going vessel. It may take a lot to turn it, but once it does turn, a new direction with far-ranging outcomes is possible. Catholics make up 18 percent of the world population, with 1.3 billion people [of all races serving at every level]; the Catholic Church is the largest non-profit organisation in the world; the Church runs nearly 100,000 elementary schools and 50,000 secondary school [and 1,300+ universities]; it operates 5,000 hospitals and 10,000 orphanages; the Vatican has a diplomatic presence in nearly every country in the world, as well as in major multilateral institutions such as the United Nations; and it has an organised, cohesive structure that allows information to flow independently from the margins to the centre and back out again without passing through government censors or captive media agencies.

What a potential force for good in these perilous times the Catholic Church could be if it fully embraces the nonviolence of Jesus, the insights of academic peace studies, and the vision of Just Peace! Pray for the Catholic Church… and all of us… to turn.