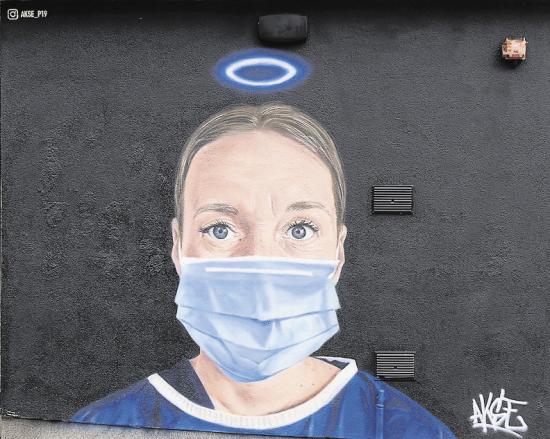 This mural celebrating Britain’s healthcare heroes appeared in May 2020 on the wall of a Chinese restaurant, ‘Sweet Mandarin’, in Manchester. PHOTO: David Dixon via geograph (CC BY-SA 2.0)

Our columnist takes on the pandemic conspiracy theorists

How are you all? I hope everyone is well. I know there’s one or two subscribers who will be thinking ‘What does she mean? Is there a reason I won’t be well?’ because after all, this pandemic is a hoax. Isn’t it?

And as for ‘it’s just flu’, there is no ‘just flu’. Flu is a serious illness. It’s not a bad cold, and if you’re thinking, ‘I had flu, and I went to work/school/football with it’, well then, no, you had a bad cold, not flu. If you have flu, you have to lie down, you just have to.

It’s healthy to be critical and aware of the potential to be taken in by a particular line. I do wonder though why this healthy scepticism isn’t applied to Dr Google, but instead only to a properly-funded (and independent of the government, by the way) research lab peer-reviewed report.

It does seem that some people who are naturally suspicious of (or directly antagonistic towards) the government line, will oppose anything put out by the government, even if it makes sense (I know, I know!).

My dad used to say (ironically, you understand): ‘Why can’t I drive on the right hand side of the road, especially if there’s no traffic? How dare the government make me drive on the left? Come to that, why should I have to have driving lessons in the first place?’

This might seem a ridiculous analogy, but there were people who seriously objected to laws making drivers have lessons, have insurance, and have some Highway Code to make sure vehicles don’t crash into each other too often.

It would be nice if people could do the right thing without being told to, but there we are. The point is, not everything that a government says is true, is actually a lie. Weird, I know.

(Might have helped if this current government had taken note of what science was saying a year ago.)

So now we have people seriously objecting to lockdown and restrictions on socialising. If there’s a serious disease being spread around the country, nay, the world, does it not make sense to restrict people’s movements somewhat?

Just for a short while until the number of deaths reduce, a little bit?

Of course, those who are in precarious employment should not have to risk their lives either, people shouldn’t feel they have to travel on a crowded bus or Tube right next to a Typhoid Mary. I can’t see any reason why most construction work, for example, has to continue in a pandemic.

Only slightly less concerning, to me, are the people who blithely carry on their routines without a facemask. Yes, I am talking about YOU, woman in my local Co-op who was happily laughing and shouting across the shop with her friend, spreading her germs to all and sundry.

Yes, she may have had a genuine medical exemption. But I doubt it.

If you feel you can’t wear a facemask because you’ve got a respiratory condition (though many do manage to wear a mask), then you go to the shop, buy your stuff, then get out, super-quick.

You do not stand there chatting away with no concerns about your health, let alone anyone else’s. Unless you don’t actually have an exemption, you just can’t be bothered. Or think ‘it’s just flu’.

I had my ‘Bill Gates Chip’ inserted into my arm last month. By this, I mean I had a flu vaccination, and like most over-50s, I was invited to have a routine ‘flu jab’ to help relieve pressure on the NHS. Normally it’s the over-65s and anyone with underlying conditions, or health workers (I did have one when I worked in the NHS many years ago, so I knew I wouldn’t have any problems with it).

So, roll on the COVID vaccination I say! I know people who would be very sick indeed (in other words, will probably die) if they caught this ‘just flu’. They say: ‘Thank you for having your vaccinations’. They would probably also say: ‘Your right to not have a face covering does not trump my right to continue living.’

So if you can, do the right thing, and get your vaccination.

This mural celebrating Britain’s healthcare heroes appeared in May 2020 on the wall of a Chinese restaurant, ‘Sweet Mandarin’, in Manchester. PHOTO: David Dixon via geograph (CC BY-SA 2.0)