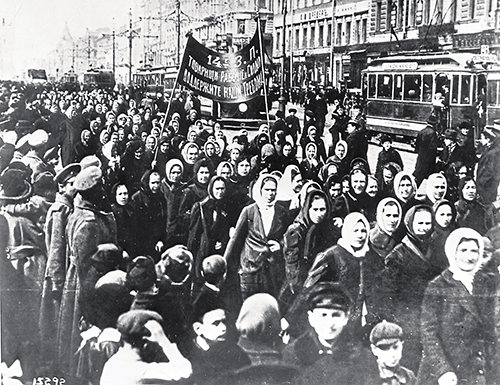 Thousands of women textile workers and housewives took to the streets of Petrograd, the Russian capital, on International Women’s Day 1917. PHOTO: The State Museum of Political History of Russia in St Petersburg via Wikimedia Commons

International Women’s Day exists to celebrate women and women’s achievements and there have been fantastic achievements: the vote, access to education, employment and health, the arrival of successful women in all spheres of public life from business through to politics.

It provides the opportunity to highlight women’s contribution to all aspects of life. But also, and perhaps more significantly, International Women’s Day is a call to action, a shout-out to women across the globe to come together, to protest and raise awareness of ongoing sexism, discrimination and violence faced by women every day.

This emphasis on political action is not surprising given that International Women’s Day is rooted in socialism and working-class women’s political struggle. Born out of exploitative working conditions and harsh inequalities, its origins stretch back to 1908 when some 15,000 women marched through New York demanding better pay and working conditions.

The following year, the Socialist Party of America announced a ‘National Women’s Day’, which took place on 28 February.

In 1910, at an international conference for working women held in Copenhagen, German feminist and socialist Clara Zetkin proposed an international day for women to be held on the same day every year.

There were more than 100 delegates at the conference from 17 countries.

Socialists and trade unionists, they agreed the idea enthusiastically, seeing it as an opportunity to highlight discrimination and push for radical social and political change.

International Women’s Day was first celebrated in 1911 in Austria, Denmark, Germany and Switzerland. More than one million women rallied to demand their right to work, training, better pay and conditions and an end to discrimination.

In 1913, Russian women celebrated International Women’s Day for the first time, choosing 8 March for the event, a date that continues to this day.

In Britain, the event was marked for the first time when, on 8 March 1914, Sylvia Pankhurst led women on a women’s suffrage march in London – the fight for the vote being an absolutely key demand at that point. She was arrested.

Three years later, in 1917, in Russia, a women’s massive strike for bread and peace on 8 March contributed to the outbreak of the February Revolution.

From the late 1960s, second-wave feminists picked up on International Women’s Day, using the annual event to highlight feminist demands of the time, including equal pay, equal opportunities, reproductive rights and an end to violence against women.

Every year since 1996, the UN has promoted specific themes: in 1999, for instance, the theme was ‘World Free of Violence Against Women’.

In 2011, on the centenary of the first IWD, US president Barack Obama declared March to be ‘Women’s History Month’, to mark women’s ‘extraordinary achievements’, while Hilary Clinton launched the ‘100 Women Initiative’ to empower women and girls.

International Women’s Day has continued to grow as literally millions of women worldwide have used the day to protest women’s continuing inequality and oppression in what is still a male-dominated world.

Women have organised around specific themes such as #TheGenderAgenda or #BeBoldforChange, coming together in workshops, conferences, rallies and highly visible protests, marching on issues such as trafficking, the fight for political power, poverty and sexual exploitation of girls and young women.

Most recently, International Women’s Day has provided a powerful platform for raising awareness of sexual harassment and violence against women that is thriving in an environment of growing misogyny, epitomised by the Trump presidency.

The statistics are shocking. According to UN statistics, 35 percent of women worldwide experience physical and/or sexual violence – often from a partner; 137 women every day are killed by a member of their family; and 15 million girls aged 15 – 19 are forced into sex acts. Tellingly, fewer than 40 percent of women report the violence or harassment they experience.

In 2018, spurred on by the rise of the #MeToo campaign, women all over the world protested against sexual harassment carried out by powerful men, enabling women who had suffered in silence to raise their voices, expose the perpetrators and demand change.

Some feminists felt the #Me Too movement, which had first been launched by black activist Tarana Burke, had become too focused on white women’s experience.

From Chile came a feminist anthem, ‘Un Violador en Tu Camino’ (‘A Rapist in Your Path’), which explicitly called out judges, police and the president as enabling or fostering violence against women to maintain women’s oppression.

Last year, despite the growing COVID threat, which led to some events being cancelled, women from Caracas to Baghdad took to the streets on 8 March to protest against individual and state violence against women.

Highlighting state collusion in violence against women, in Mexico, where an estimated 3,800 women were sexually assaulted and murdered in 2019, feminists urged women to strike on 8 March and thousands marched to demand government action.

In Spain, too, women took to the streets to protest against sexual violence laws that discriminate against women. Protests such as these are risky: International Women’s Day rallies in Pakistan and Kyrgyzstan were met with violence while police confronted women in Turkey and Chile.

The impact of COVID

International Women’s Day continues in part because, across the globe, women are still disadvantaged compared with men.

The COVID-19 pandemic has thrown this inequality into harsh relief – and has widened gender and economic inequalities.

The UN and agencies such as Women’s Aid have reported a sharp increase in domestic violence as stay-at-home orders have literally locked women in with their abusers.

Poor and marginalised women already experiencing poverty, racism and other forms of discrimination are at greater risk of catching, transmitting and dying of COVID.

Women’s occupations, too, put them at risk: 70 percent of frontline health and care workers are women, who are at particular risk of COVID. And, economically, COVID will worsen the gender pay gap, where women’s pay is already 16 – 28 percent lower than men’s. The UN has estimated that this year 47 million women and girls will be pushed into extreme poverty.

The world is facing major challenges not just from COVID but also from that other terrifying challenge, the climate crisis.

Both impact on women in very particular ways, increasing and exacerbating inequalities and oppressions. And women will need to be in the forefront of finding solutions.

International Women’s Day was born out of women’s determination to challenge inequality and fight for women’s rights.

We can only do this collectively and by linking with women across the globe.

Thousands of women textile workers and housewives took to the streets of Petrograd, the Russian capital, on International Women’s Day 1917. PHOTO: The State Museum of Political History of Russia in St Petersburg via Wikimedia Commons