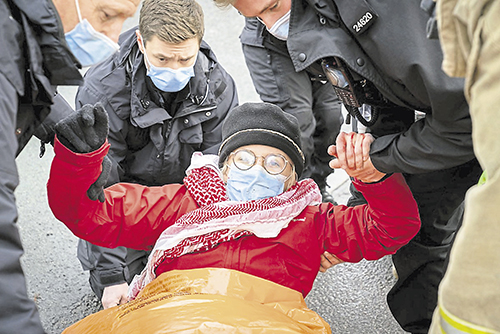 An interview with two founder members of Palestine Action

PN: Tell us about the founding of Palestine Action.

HA: Last summer, a few of us who had already done one-off direct actions against Elbit Systems – maybe once a year we would have a blockade – realised that, to be effective, what we needed was constant, sustained direct action.

Especially since the UK government has been complicit in the colonisation of Palestine for over 100 years, since the Balfour declaration in 1917. Now the UK continues to profit from and sustain Israel’s apartheid regime over the Palestinian people by hosting Elbit Systems in the UK .

Appealing to the government, signing petitions, lobbying MPs hasn’t changed the UK’s attitude towards supporting Israel’s regime. The only way that we can really make change from our position here in the UK is to use our privilege to stand against racism and to stop these weapons where they are being made, which is right in front of us.

PN: How did you personally come to activism?

HA: I was born and grew up in the UK. My great-grandfather was killed by a British soldier in the early 1920s, shortly after the Balfour declaration, leaving my great-grandmother a single parent.

In 1967, when still a child, my father was forced to hide under the table while the Israeli military was shooting into the house.

The only way for the family to escape was to crawl through the back of the house with just the clothes they had on their backs and no shoes. They had to hide in caves for several days without any humanitarian aid.

They eventually made their way to Iraq which is where my father met my mother. My mother’s family are all based in Baghdad, so I’ve seen the direct effects of the UK and US invasion and involvement in destabilising the region there.

RB: I’ve been involved in activism and anti-military stuff for a number of years. Extinction Rebellion and Christian Climate Action have been a big part of my life over the last few years. My activism is informed by my Catholic faith.

PN: What have been the most important influences on you?

HA: I’d say a very recent one is Extinction Rebellion. Seeing how it brought a lot of ordinary people out for such an important cause and set the mood for other groups to say: ‘We need to empower ourselves and take a stand against these industries which are not only damaging the climate but profiting from the deaths of civilians.’

RB: So, for me, it would be father Martin Newell and the Catholic Worker and even, beyond that, the Berrigans.

The tactics we’ve used, throwing red paint – that’s a Catholic Worker tradition. It’s nothing new even though it seems to have created a large storm online. We’re just reappropriating it for the modern world.

PN: Who would you say is your audience?

It’s about helping people to realise that they have a lot of power in themselves whether that’s just lying in the road or being attached to a lock-on or throwing red paint.

We say to ordinary people who are angry and frustrated at the continued complicity of our government – people who may normally sign a petition or share an angry post – that you can directly stop these weapons from being produced even if it’s just for a few days.

If we all take part in sustained action we can win this together.

RB: Even the company themselves – these are intelligent, clever people. They spend their time building weapons when they could be making the world better. We don’t want to see the Elbit factory in Oldham, say, disappear. We want to see it turned into something that is useful for humanity.

PN: Recently I noticed an action during which red paint was thrown on a building in Stratford. Is this type of action clandestine or do the activists wait for the police ?

“Knowing so many people were rooting for us was extremely uplifting.”

So if we’re on the top of a roof we would expect to get arrested afterwards. The police use bail conditions to limit the amount of times people can take action without being [held in prison] on remand.

So, to make it possible to do constant, sustained actions, we do encourage people to do covert actions as well. This means we can throw red paint and then, if the police aren’t there, we just walk away and go home.

PN: What would you say to people who argue that stopping people going to work or making extra work for cleaners is not nonviolent?

HA: Nothing we can do to stop a few workers, who will probably still get paid, from going to work that day can be compared to the violence that people face on the other side of these weapons, whether in Gaza or Kashmir. The biggest symbol of nonviolence is stopping violence.

PN: Can you say a bit more about the obstacles you’ve faced?

HA: It’s been a pattern. About three weeks after we launched, there was a meeting between the Israeli minister of strategic affairs (Orit Farkash-Hacohen), the Israeli defence minister (Benny Gantz), and the British foreign secretary (Dominic Raab) where they said they wanted to shut us down.

Since then, Facebook censors have removed our posts, GoFundMe have taken our page down and Open Collective [another online fundraising platform] stopped our donations at the peak of our activity.

We also see this as a sign of our effectiveness that the people who are working to continue the oppression of the Palestinians are actively putting obstacles in our way. If anything that’s more of a push for us to continue to build Palestine Action.

PN: How do these obstacles make you feel?

HA: I do feel frustrated at the fact that a lot of the attention from the counterterrorism police is because we have Palestine in our name.

I’ve been doing Palestine activism for a while and I’ve never faced such a strong reaction from the Israeli ministry and groups who are working to continue the oppression of Palestinian people.

While we continue to challenge the complicity of the UK in Israeli apartheid we are probably going to continue facing this type of obstacle.

PN: What helps you to keep going?

RB: Knowing that we’re doing the right thing, having those resources within ourselves and that courage... which doesn’t mean we’re not scared.

For some of us that means having a supportive community or partner around; for others that means the extended family.

PN: What is your favourite action?

HA: It was the Shenstone one.

RB: Definitely for me too, just in terms of effectiveness. The factory is shut down. It is exposed for what it does. It’s got red paint all over.

The action involved lots of people, members of the community. Even in Shenstone, a small town in the middle of Britain, a local Palestinian woman brought us food.

HA: We put on social media, ‘the mainstream media isn’t responding to us. Can you share our press release’ and I think we got 1,000 people sharing it in a few hours. Knowing so many people were rooting for us was extremely uplifting.

Henrietta Cullinan is a peace activist and writer.

For more about Palestine Action (and to sign up to their e-newsletter): www.palestineaction.org