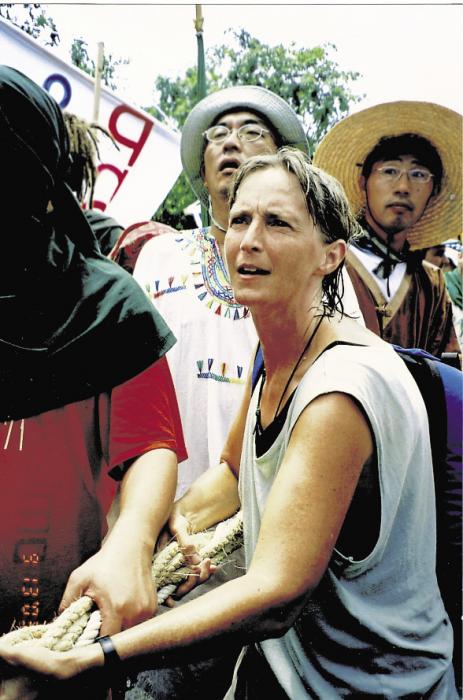 Lisa Fithian helps pull down the security fence during the protests against the World Trade Organisation in Cancun in 2003. PHOTO: Chelsea Green Publishing

From the Central America peace movement of the 1980s to the movements resisting Trump, US activist Lisa Fithian has been on the frontlines of social change for decades. This is an extract from her recent book Shut It Down: Stories from a Fierce, Loving Resistance (Chelsea Green, 2019) – reviewed next issue – in which Lisa reflects on the power of nonviolence.

When people ask about my approach to nonviolence, I like to say that I’m committed to strategic nonviolence, believing it is the most effective way to dismantle what does not serve us while building a better world.

I am not a pacifist; I believe that our actions must have a confrontational edge, but I believe we can achieve that edge without an intent to do physical, emotional, mental, or spiritual harm.

There are many nonviolent tactics that can be incredibly disruptive and effective, like highway blockades with bodies or boulders, as they do in the Global South. I also acknowledge that in the face of violence from the state, nonviolence can require incredible courage, sophisticated strategy, and creative, flexible tactics.

This stance has been shaped by my exposure to the dangers activists encounter when they’re in the streets.

I’ve watched police aggression toward public demonstrations evolve after 11 September 2001. I have witnessed the government develop its playbook against large mobilisations in co-ordination with the department of homeland security and other federal agencies.

At the anti-FTAA [Free Trade Area of the Americas] mobilisation in Miami in 2003, the police turned their guns on labour union members and elderly activists.

At the mobilisation surrounding the G8 meetings in 2004 in the predominantly African-American town of Brunswick, Georgia, the governor mobilised at least 10,000 law enforcement agents, including the National Guard, into a town of 15,000 people [1]. With this massive crackdown, only about 300 G8 protestors travelled to Georgia.

It was abundantly clear that the George W Bush administration saw that summit as a training ground for the new department of homeland security to practise domestic occupation [2].

From the hundreds of undercover agents wearing their humorously-conspicuous squeaky, out-of-the-box leather sandals to the Humvees patrolling the streets, you couldn’t miss the overwhelming force deployed to suppress the community of Brunswick and the First Amendment rights of ordinary people.

The military occupation of Brunswick cost US taxpayers $35 million. Meanwhile, we ‘scary’ protestors hosted a shrimp boil, held a candlelight vigil for those who have died as a result of G8 policies, and educated the public about the 22 toxic waste sites in Brunswick – all of which closed in advance of the G8 so that politicians didn’t have to smell the consequences of their policies.

Ultimately, I’m not sure that ‘violence’ and ‘nonviolence’ is a framing that serves us.

It positions the issue as emanating from within our movements, when in reality the violent side of the equation usually emanates from law enforcement or the military.

I think a more useful frame is one that looks at questions of government-mandated violence and self-defence against that violence with an understanding that self-defence is a choice we make to stand up for what is right.

I prefer to talk about self-protection – how we protect ourselves by training and preparing for potential violence, developing our awareness, learning how to protect our bodies, and knowing what we can and cannot endure.

Some communities have defended/protected themselves or their members by establishing safe houses, building barricades, burning tyres, throwing rocks, shutting down roads, occupying buildings, land, or factories, showing up in large numbers to march, establishing human perimeters, or collectivising money and resources.

Some have taken up arms. Others, like the Black Panthers, used guns more to send a message rather than send bullets.

In the global context, we will always see a diversity of tactics as people of colour, poor people, and oppressed people respond to the state violence that harms them.

I have learned to stop carrying judgment and acknowledge that taking the moral position that ‘nonviolence is the only way’ is, in and of itself, oppressive.

If I am not the one with skin in the game, who am I to say?

And then there are the many fine lines and gray areas between defensive and offensive tactics. Is throwing a rock at an Israeli tank violent?

Is picking up arms to stop an impending foreign invasion violence, or is it self-defence or protection?

I have also learned via my trainings that everyone has different ideas about nonviolence.

At the end of the day, I like to stick with what my lived experiences have taught me, while listening to the experiences of others, and here’s what I have seen: You can create a hell of a lot of social disruption and change using nonviolent tactics alone.

In my heart, I also believe that violence is a tool of the state, and in the words of Audre Lorde, ‘The master’s tools will never dismantle the master’s house’.

I have seen how the world pays attention when buildings burn and windows are broken, but I have also seen how this frightens people.

When I work with people who practice aggression in their dissent, I try to walk that line of not marginalising or judging them while also showing a different way.

I communicate the possible consequences of their actions and my concerns for the vulnerabilities they create.

I have found that it is usually young white men who are most drawn to aggressive tactics, and I say to them: ‘Do you really want to take their bait?’

In almost every situation over the past 20 years where people have been caught planning a risky or violent action, it turned out that a government infiltrator was in the mix urging them on.

This occurred most infamously during the 2008 Republican National Convention protests, when three young white men, in two different situations, were arrested for constructing Molotov cocktails.

During their trial, it became clear they did not intend to use them, and it came out that an agent provocateur with the FBI had been goading them forward.

Recently, the public debate surrounding the anti-fascist ‘Antifa’ has been prominent.

Antifa are anti-racist, anti-fascist militants who use a range of tactics, including physical engagement if needed, to confront white supremacists and racists.

After the election of Donald Trump, the actions of Antifa were more conspicuous as they faced off with the violent white supremacists emboldened by the mainstreaming of their views.

We know that the media is obsessed with these images of protestors dressed in black, whether it be Antifa or the black bloc.

We can’t control this, and we need to understand that people really buy into this criminalisation campaign.

Over the years, I have witnessed the huge effort the government puts into criminalising our movements and the massive investments corporations put into silencing and maligning us via relentless media smear campaigns.

These investments against social justice movements show me that our resistance truly threatens their power. And what threatens them the most is not the black bloc, but a resistance filled with beauty, joy, and love.

[2] A year later they practiced domestic internment at the 2004 Republican National Convention when they arrested 1,800 people and put us in cages at a bus depot at Pier 57. We called it Guantanamo-on-Hudson. Most of the charges were dismissed. You can read about it here: https://www.thevillager .com/2004/09/pier-57-pens-are-called-guantanamo-on-hudson/.

Lisa Fithian helps pull down the security fence during the protests against the World Trade Organisation in Cancun in 2003. PHOTO: Chelsea Green Publishing

Our next issue will have a review of Lisa Fithian’s Shut It Down: Stories from a Fierce, Loving Resistance (Chelsea Green, 2019). This extract has been reprinted with the permission of the publisher.