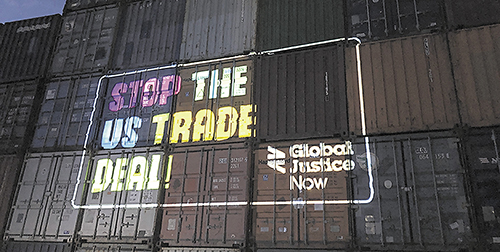 A part of Britain’s Establishment has always looked to the United States for leadership. They view the US as a model economy in which the market rules, big business can behave as it sees fit, and rich individuals are free from irritating ‘burdens’ – such as taxes which are ‘redistributive’ (they take more from the rich and less from the poor, as a percentage of their income).

We have more than a few such figures in our government, including the trade secretary, Liz Truss. That is appropriate because an important vehicle for pulling our economy closer to the US is the controversial trade deal we’re negotiating with the Trump administration.

Trade deals today go well beyond tariffs (taxes on goods and services coming into or going out of a country).

All on the table

Trade deals now interfere with how we regulate food- production, provide public services, and regulate big business. For once, president Trump was right when he said: ‘Look, I think everything with a trade deal is on the table. When you’re dealing in trade everything is on the table. So, NHS or anything else, a lot more than that.’

How does it work? Anyone who knows anything about the US trade deal has probably heard of chlorinated chicken. Washing poultry in treatments such as chlorine dioxide is common in the US, where it is used to remove bacteria accumulated over a tortured lifetime.

It has become an issue because trade deals today focus on ridding the world of regulations that ‘interfere’ with the market.

Negotiators try to level standards, by saying that two products must be treated the same, even if they are made differently. This might be fine if two goods really are equivalent, but often they are not.

US food standards are radically different from Britain’s, with farming on an industrial scale and intensive use of antibiotics and chemicals.

Trade deals also give huge powers directly to big business. It could be the ‘right’ of US corporations to bid for NHS contracts or rail franchises, in turn making the nationalisation of those services near impossible.

It could be the power to challenge governments about regulations that big business regards as unnecessary (think stricter environmental standards).

It could be the ability of pharmaceutical corporations to charge the NHS whatever they like for medicines; or the rights of Amazon and Google not to have to pay a digital-services tax.

This might explain why so many are campaigning to stop such a deal: from health workers to farmers, from environmentalists to the Daily Mail. Stopping the US trade deal is imperative if we want to build a better Britain.

We don’t currently know what will happen with the US trade deal post-Trump. But we certainly can’t put away our placards just yet.

While Biden is certainly less interested in trade deals in general, and much less sympathetic to the plight of Brexit Britain in particular, US trade deals are driven by big business interests.

And indeed the British government has already begun the process of deregulating – from lifting a total ban on pesticides believed to kill bees, to allowing gene-editing, to the chancellor calling for a ‘Big Bang 2.0’ to deregulate the financial sector – all of which could make the path to a US trade deal easier.

There is a wider point to consider too. We should recognise that there is nothing particularly special about the US deal, except that the size of the US economy means that it will fundamentally reshape Britain.

The deal is a microcosm of what is wrong with our global trading system, which has fostered an unsustainable economy and handed the significant decisions over our lives to the super-rich. The political crisis that we are living through is a product of this economy.

How it could be

Trade does not have to be a problem.

It can introduce new technologies and skills, as well as new products. Investment can stimulate new industries. But these benefits will not be shared, unless governments can control, tax, and direct the resulting activity: more wealth will simply accrue to those at the very top.

So, instead of slashing standards, the goal of trade rules should be regulating flows of goods and money.

This will also require, for instance, co-ordination on tax, and controlling speculation. But, as a minimum, trade rules should not scupper these efforts. Enforceable clauses in trade deals should ensure that they cannot block a government’s ability to support public services or tackle climate change.

Trade rules currently encourage the free movement of big businesses, allowing them to play governments against one another, forcing down standards. We need to reverse this process – for example, by setting minimum wages and conditions that companies need to meet in order to benefit from the trade deal.

Trade deals should not protect corporate monopolies, be they in medicines, energy, or the high-tech economy. The transfer of technology is crucial to countries being able to develop. Learning and copying technologies should be encouraged.

Trade deals should cease to give privileges to the powerful. But let’s aim higher.

If trade is supposed to improve people’s lives, let’s give communities and individuals the power to challenge trade rules if the opposite happens. As trade deals affect so much of our lives, we also require greater parliamentary and public scrutiny.

This seems utopian. But, as right-wing populists and others attempt to rip up the international system, and climate change poses an existential threat, radical reform is the only way to avoid a retreat into xenophobia, bullying, and a collapse of internationalism.

That’s where we come in. For all that Joe Biden is surely preferable to Donald Trump, a return to 1990s-style globalisation is not an option, and substantial mobilisation to push politicians will be vital if we are to break with market-knows-best economics.

Only through radical transformation can we hope to turn things around.

Nick Dearden is the director of Global Justice Now.

This article is based on his book, Trade Secrets: the truth about the US trade deal and how we stop it, which is available for free from: tradesecrets.globaljustice.org.uk