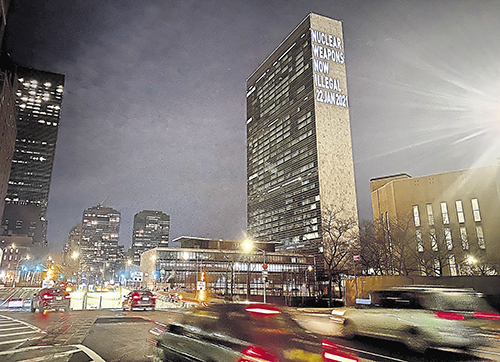 ICAN projects messages onto the UN building in New York, USA, to celebrate the entry-into-force of the Treaty on the Prohibition of Nuclear Weapons on 22 January. Photo: ICAN

On 22 January, the Treaty on the Prohibition of Nuclear Weapons became law

A majority of people in Britain think that the UK should sign up to the UN’s nuclear ban treaty, which entered into force on 22 January.

That was the finding of a Survation poll commissioned by the Campaign for Nuclear Disarmament (CND), Britain’s largest peace organisation by membership.

Survation found that 59 percent of the British public thought the UK should sign up to the Treaty on the Prohibition of Nuclear Weapons (TPNW), and 77 percent supported a total global nuclear weapons ban.

Peace campaigners around the UK celebrated the TPNW’s ‘entry into force’ (EIF), including with bell-ringing – church bells were rung in many places including at Iona Abbey in Scotland and St James’ Piccadilly in London. Also in Scotland, massive messages were projected onto iconic Edinburgh buildings, including ‘The World is No Place for Nuclear Weapons’.

Penny spliced together video clips of people around the UK dancing (including in the sea).

Luton peace activist Lynn Bliss took her daily exercise while wearing a sandwich board telling Luton about the EIF – she was interviewed for 10 minutes on BBC’s Three Counties Radio.

The global coalition most responsible for the TPNW coming into being, the International Campaign Against Nuclear Weapons (ICAN), held over 710 events around the world to mark the EIF, including an online public meeting featuring Noam Chomsky.

The TPNW EIF was greeted with enthusiasm by civil society groups around the world, including the International Committee of the Red Cross and other international health bodies, who said, in a joint statement: ‘The climate crisis and COVID-19 pandemic have brought into sharp relief the crucial need for timely international cooperation driven by evidence and expert warnings, to safeguard the health and security of people.’

ICAN commissioned a poll in six NATO countries which found even stronger majorities in favour of joining the treaty.

A poll last June for Greenpeace found that 83 percent of Germans also wanted US nuclear weapons removed from their soil – as required by the TPNW.

ICAN projects messages onto the UN building in New York, USA, to celebrate the entry-into-force of the Treaty on the Prohibition of Nuclear Weapons on 22 January. Photo: ICAN

CND have issued a briefing on what the TPNW means for the UK: www.cnduk.org. Penny and Jane’s ‘ICAN Can-Can’ is on YouTube: www.tinyurl.com/peacenews3576. More from ICAN: www.icanw.org.