Vicky Osterweil, In Defense of Looting: A Riotous History of Uncivil Action 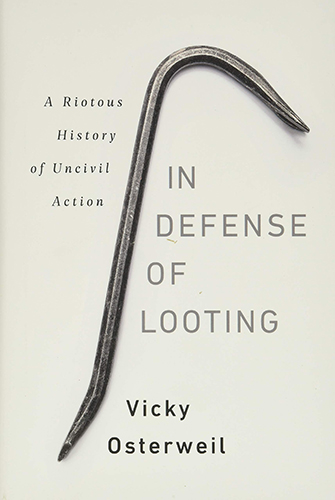 Written in the wake of the 2014 protests in Ferguson, Missouri, Vicky Osterweil’s central argument is that looting and rioting are positive actions, which ‘in most instances… transform and build a nascent moment into a movement’.

Unserious and incurious, In Defense of Looting won’t change the minds of seasoned peace activists though, worryingly, it might influence those who are in the process of forming their views on protest and political change.

Osterweil maintains that looting makes ‘day-to-day life easier by changing the price of goods to zero’, redistributes wealth and ‘reinforces bonds of solidarity’, concluding: ‘we need to argue for and defend every tactic that might overturn’ white supremacy, capitalism, empire and property (emphasis added).

A significant part of the book is devoted to criticising nonviolent struggle which, at one point, she claims ‘is structured around victim blaming and anti-Blackness.’

Centred on the US, there are, to be sure, interesting sections – on the racial roots of property, the slavery origins of the police, and the Black-led resistance to these oppressive historical forces.

There is a reliance on secondary sources, which wouldn’t be a problem if all the provocative arguments were referenced adequately. Instead, one can go pages without any citations, rendering some assertions largely meaningless – Black riots formed ‘a central part of the [1960s civil rights] movement’s power and effectiveness’.

I’m often attracted to polemical writing, but Osterweil is maddeningly simplistic. One chapter is titled ‘All cops are bastards’. Elsewhere, she claims FDR’s New Deal ‘did nothing more than strangle a revolutionary movement in its cradle’ (emphasis added). Osterweil seems to think that Martin Luther King Jr travelling with an armed entourage fatally undermines the case for nonviolence. (There is no reference for this, of course, though a 2016 Associated Press report I found suggests that this only applies to King’s early activism in the mid-1950s).

Tellingly, Osterweil fails to engage with any of the academic or historical literature highlighting the effectiveness of nonviolence, with no mention of the work of Erica Chenoweth and Maria Stephan, researchers in the orbit of the International Center on Nonviolent Conflict, Gene Sharp or George Lakey.

Osterweil is also blasé about the fact that looting and rioting often lead to people being injured and sometimes killed – either by state repression or by the rioters and looters themselves – and shows little interest in evidence that nonviolence engenders more support from the public and media.

For example, a June 2020 Reuters/Ipsos poll of people in the US, about the Black Lives Matter protests, found that while 73 percent of respondents supported ‘peaceful protest and demonstrations’ only 22 percent backed violent protests.

A recent peer-reviewed article in the American Political Science Review by Omar Wasow about ‘How 1960s Black Protests Moved Elites, Public Opinion and Voting’ came to similar conclusions, as well as finding that violent protest caused a rightward shift amongst voters.