Cyril Pearce, Communities of Resistance – Conscience and Dissent in Britain during the First World War 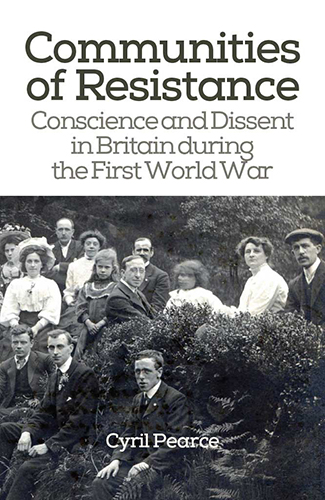 The First World War was the first mechanised, industrialised, chemicalised war and the founding catastrophe of the 20th century. It led to the Bolshevik Revolution in 1917, the rise of Hitler and the Second World War, the Cold War, and much more.

Conscientious objectors (COs) have been called the shock troops of dissent in the First World War, and they were on the right side of history.

Cyril Pearce’s magnificent new book about the men who refused to fight on grounds of conscience is surely now the definitive historical work on the topic.

Pearce is a meticulous historian. His database of nearly 20,000 British First World War COs is the foundation of his research. In this book, he tells the revealing stories of courageous individuals and the groups that supported their witness.

Although the 1916 Conscription Act recognised the legitimacy in principle of conscientious objection to military service, it was very difficult in practice to be recognised as a CO by the biased, patriotic, military-dominated tribunal system set up to decide who was eligible.

The range of stands varied. Christadelphians, a Christian evangelical group who refuse to participate in military or police forces, were willing to work on munitions. Other COs joined the (Quaker) Friends Ambulance Unit or the royal army medical corps.

Some served in army uniform in the Non-Combatant Corps. Others were fined and turned over to the army where, if they refused to carry out orders, they could be court-martialled and sentenced to hard labour.

Some accepted a home office scheme and did work of ‘national importance’ at work camps such as in Wakefield or Dartmoor.

Absolutists refused any collaboration with the war effort whatsoever and went through multiple courts-martial and imprisonments. Then there were those that simply went ‘on holiday’, seeking to hide from the authorities – sometimes going to Ireland or the US.

It was helpful for me to have read Pearce’s earlier (2001) study on his native Huddersfield, Comrades in Conscience. In that work, he described a town that was an island of communal anti-war resistance in the roiling seas of British patriotic fervour. It was a town that already had a radical history.

By 1914. the local labour and socialist movements were strong, with the Independent Labour Party, the British Socialist Party, Socialist Sunday Schools and the socialist Clarion cycling club all active there.

The Liberal MP for the town was against the war, and the Quakers and their adult school were influential. Women with suffragette, socialist and Quaker backgrounds were particularly active in the peace movement.

By 1915, the Fellowship of Reconciliation (FOR), No-Conscription Fellowship (NCF) and Union of Democratic Control (UDC) – which variously opposed war, conscription and military influence in government – all had local groups in the town, prior to conscription becoming law in January 1916. In all, there were 121 COs in Huddersfield and the CO index was 6.41, that is, out of every 1,000 eligible males, more than six of them were COs.

Huddersfield was a special place of resistance during the First World War. But was it unique? This is what Cyril Peace seeks to explore in his latest book.

Here are wonderful stories of communities resisting, with socialists, nonconformist Christians, Quakers and radical suffragist/suffragette women working together to support COs and their families.

Pearce helpfully structures his book to survey patterns of dissent in Birmingham, London and Scotland. He looks at ‘Hot Spots’ in Bristol, Croydon, Letchworth, Aberavon and Briton Ferry. He also reviews what he calls ‘Heartlands’ in Lancashire, Middlesex and the West Riding of Yorkshire.

Where I had a connection with the people and places concerned, Pearce’s storytelling was even more interesting to me. I grew up near Settle and Bentham. I did my school teaching practice in Bridgend, South Wales. I knew Arthur Raistrick – he talked at my secondary modern school’s Speech Day. I read his geology books. But I did not know that he was a Quaker and a CO.

What do I learn from Cyril Pearce that is relevant for today? Belong to a progressive peace group, work with allies even if you have differences, and together create communities of resistance that support those willing to be ‘storm troopers’ for justice and peace. We still need COs against war, but also objecting to poverty, neo-liberalism, climate change, racism, sexism and fascism.