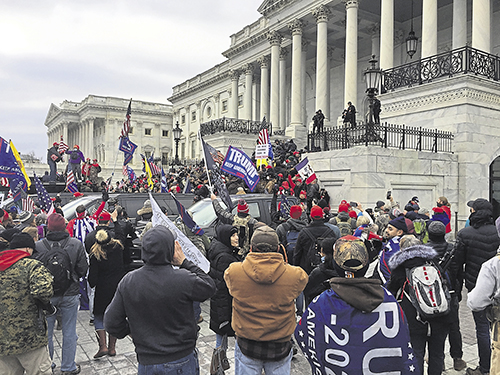 The US has regularly opposed democracy, overthrowing democratically elected leaders it doesn't like, Milan Rai reminds us

‘To those who wreaked havoc in our Capitol today: you did not win. Violence never wins. Freedom wins.’ So said US vice-president Mike Pence.

Incoming US president Joe Biden said: ‘The scenes of chaos do not reflect the true America, do not represent who we are.’

Pence and Biden were speaking after armed pro-Donald Trump protesters flooded into Congress in Washington DC on 6 January, breaking windows and doors and occupying offices for hours. The rioters had been sent to the congressional buildings by then US president Donald Trump, who had addressed a rally of thousands nearby.

Trump asked the crowd to go to the Capitol (where Joe Biden’s election as president was being confirmed), he repeatedly told his supporters they could not let Joe Biden become president after ‘stealing’ the election, and he whipped up the crowd by talking about fighting ‘much harder’ – ‘if you don’t fight like hell, you’re not going to have a country anymore’.

Trump told the protesters: ‘When you catch somebody in a fraud, you are allowed to go by very different rules’. He added: ‘you’ll never take back our country with weakness. You have to show strength and you have to be strong. We have come to demand that Congress do the right thing and only count the electors who have been lawfully slated’, in other words, to choose Trump as president instead of Biden.

During the storming of the Capitol, five people died, including a Capitol police officer, Brian D Sicknick (42). Sicknick died the next day from his injuries after he was hit in the head with a fire extinguisher by a Trump supporter.

An unarmed rioter, Ashli Babbitt (35), was shot dead by police as she climbed through a broken window into the Speaker’s Lobby, a hallway leading into the chamber of the US house of representatives. (Members of congress were visible through the window, just yards away, as they were being evacuated, at the time the crowd was breaking through the window and Babbitt was climbing through.)

Three other rioters also died, two of medical conditions. Rosanne Boyland (34) was trampled to death by other Trump supporters. Kevin Greeson (55) had a heart attack and Benjamin Philips (50) had a stroke.

The violence could easily have escalated. Molotov cocktails were found in the grounds of the Capitol, where Congress is, and pipe bombs were found at the headquarters of the Democratic and Republican parties.

Then Mike Pence said: ‘To those who wreaked havoc in our Capitol today: you did not win. Violence never wins. Freedom wins’.

My first reaction was to think of the US- and British-sponsored coup in Iran in 1953. Violence never wins?

We now know that the British government tried to overthrow the elected nationalist government of Mohammed Mussadiq (sometimes spelled ‘Mossadegh’ or ‘Mossadeq’) two years earlier, in 1951. According to the head of MI6’s Iran station at the time, Norman Darbyshire, the first attempt used money, not violence. A British academic, Robert Zaehner, was sent with ‘well over a million and a half pounds’ to bribe members of Iran’s Majlis (parliament) and other prominent Iranians.

This led to Mussadiq throwing British diplomatic staff (including intelligence officials) out of Iran, and the British had to turn to the CIA for ‘help’ in overthrowing the democratically-elected prime minister, and installing a more obedient government under the shah of Iran.

“It is important to resist fascism. It is just as important not to reinforce myths about the democracy-loving nature of the US.”

New York Times journalist Stephen Kinzer described the coup organised by the CIA officer on the ground, Kermit Roosevelt, grandson of former US president Teddy Roosevelt. (Kinzer is author of All the Shah’s Men: An American Coup and the Roots of Middle East Terror.)

The first stage was bribing members of parliament and leaders of small political parties that were a part of Mussadiq’s political coalition, then Roosevelt bribed newspaper editors, owners and columnists and reporters. Then he bribed religious leaders to denounce Mussadiq at Friday prayers.

Kinzer told Democracy Now! the next stage: ‘In what I think was really his master stroke, he hired the leaders of a bunch of street gangs in Tehran, and he used them to help create the impression that the rule of law had totally disintegrated in Iran. He actually at one point hired a gang to run through the streets of Tehran, beating up any pedestrian they found, breaking shop windows, firing their guns into mosques, and yelling “We love Mossadegh and communism.” This would naturally turn any decent citizen against him.

‘He hired a second mob to attack the first mob, to give people the impression that there was no police presence and order had completely disintegrated.

‘So, within just a few weeks, this one agent, operating with a large sum of cash and a network of contacts and various elements of society, had taken what was a fairly stable country and thrown it into complete upheaval.’

However, a second US attempt on 19 August succeeded. The day started with pro-shah protesters marching on parliament (the Majlis) again. They were incited by someone working for the US to set fire to the offices of a pro-Mussadiq newspaper along the way. Another group were led by another US agent to the offices of several left-wing newspapers, ‘all of which were thoroughly sacked’. That’s from the official, internal CIA history of the coup.

Mobs gathered in the centre of Tehran, and parts of the military and police (also bribed) came out against the government. According to the internal CIA history, three people were killed in the taking of Radio Tehran, the most important target of the coup. The radio was used to mobilise coup plotters in different parts of the country, and bring provincial governments ‘into line’.

Mussadiq was put under house arrest and a brutal military dictatorship was set up under the shah, which lasted for 25 years until the Iranian revolution.

The history of US foreign policy, certainly since 1945, demonstrates the opposite of both statements.

Soon after overthrowing Mussadiq in Iran, the CIA overthrew another democratically-elected government in 1954, this time in Guatemala.

Mussadiq’s crime had been to ask the Anglo-Iranian Oil Company for a fair share of oil revenues, and then, when the company (now BP) refused, nationalising the oil industry – just as the British Labour government was doing for Britain’s key industries at the same time. The crime of Jacobo Arbenz in Guatemala was to propose policies that benefited the poor, including land reform, which threatened the power of the US company, United Fruit.

It is important to resist fascism and Trump-type authoritarianism. It is just as important not to reinforce myths about the democracy-loving nature of the US (or UK).

The ‘true’ USA showed its face in Tehran in 1953, and in so many other places.

That’s when democratically-elected president Salvador Allende was overthrown by the CIA.

Among many brutal actions, the CIA provided weapons, money and even life insurance to Chilean assassins to get rid of an obstacle to the military coup: the commander-in-chief of the Chilean armed forces, general Rene Schneider.

General Augusto Pinochet ruled Chile for two decades. His was just one of many fascist dictatorships in Latin America that were installed and supported by the US.

Violence won for many years in Chile, and freedom lost, because that was the way the United States government wanted things.

The world is lucky that Trump does not have the determination, organisation or good judgement to mount a serious threat to the US political system. He could instigate a riot and bully election officials, but he did not have the long-range planning skills needed to organise something like ‘the other 9/11’. We may not be so lucky in the future.