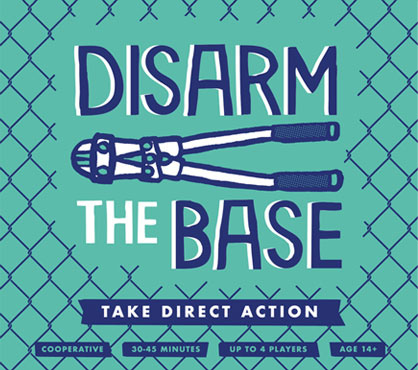 From the household copy of Risk to the paintable figurines of Warhammer to the eternal Chess, war is a fixture of many boardgame genres. Why then should it be so surprising when a game designer subverts the expected formula of war games: lots of little men being pushed around a board and then falling over?

Jessica Metheringham’s Disarm The Base does just this.

The goal of the game is not to kill people but to disarm warplanes that will be used against civilians (PN readers may recognise the close – and entirely intended – resemblance of this scenario to the real-life action related in Andrea Needham’s The Hammer Blow).

To succeed, players co-operate instead of competing against each other, bucking another boardgame norm.

Rather than being the power fantasy that most war games offer, this is a rare example of a virtue fantasy whereby the players get to act out the heroics of very relatable heroes whose only special talents are their strong moral compass and willingness for self-sacrifice.

This last point is key to the story of the game as it isn’t won by fleeing the military base once the planes are disarmed but when the activists unfurl their banners after succeeding in their mission, in the full knowledge of their imminent arrest and likely imprisonment.

The experience of playing the game is like watching that bit in a heist movie where the mastermind explains their plan as we the viewers are shown how things are supposed to play out.

Players sneak around the board avoiding a patrolling guard and any light sources while trying to break into hangars and disarm the planes.

Each turn there is a chance for new security measures to be put in place, constraining movement and increasing tension.

The heist movie analogy goes one step further as every time I have played the game I start with a sense of purpose and a plan and everything goes smoothly until around three-quarters the way through. I suddenly feel that I can’t win and that I never had a chance, I just didn’t know it.

This feeling of aspiration mixed with challenge is what makes Disarm The Base not just a game that I’m glad was made (as a counterweight to all those war-normalising games), but one that I am always happy to take down from the shelf with the thought: ‘This will be the time that I make it!’

The healthy dose of realism and optimism that this game inspires feels thematically appropriate, as after all, that’s what makes an activist.