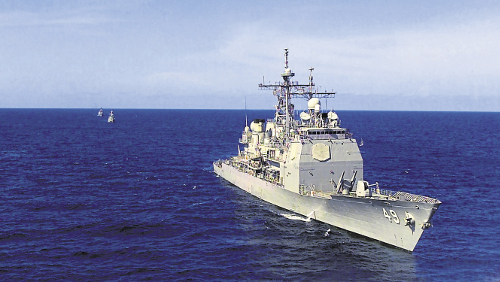 On 5 January, Ali Larijani, speaker of the Iranian parliament, compared the US assassination of Iranian general Qassem Suleimani to the CIA-organised coup of 1953 that overthrew parliamentary democracy in Iran, and to the shooting down of an Iranian passenger jet in 1988 which killed 290 civilians.

Larijani’s remarks were not reported in the Guardian, the Daily Telegraph, the Financial Times or The Times the next day.

In fact, these newspapers (the elite national print media) effectively suppressed any mention of the coup or Iran Air Flight 655 in the week that followed the 3 January drone attack (even after Iran shot down the Ukrainian passenger aeroplane). This is a shocking case of media self-censorship.

Leaving aside the devastating 1953 coup (which was initiated by Britain’s MI6), let’s look at the recent media treatment of Iran Air Flight 655. This 1988 shootdown was relevant because it was the most directly comparable single act of US violence against Iran in terms of a dramatic escalation of hostilities.

It was also relevant to the question of Iranian retaliation, which was the primary focus of British news reporting in the week after the Baghdad airport strike.

On 9 January, Guardian journalist Julian Borger wrote, in an article mainly about the ways that Iran might retaliate for the assassination of Suleimani: ‘Past experience suggests that real revenge will be served cold, in a manner that makes its provenance clear to the intelligence services but impossible to prove to the public’.

In his lengthy (902-word) article, Borger did not give any examples of past experiences with Iran which had given this impression.

This was odd as, five days earlier, immediately after the Baghdad massacre, Borger had written in the Guardian: ‘The CIA was also convinced that Iran was involved in the bombing of Pan Am flight 103 over Lockerbie in 1988, in reprisal for the accidental downing of an Iranian airliner, Iran Air 655, five months earlier.’ (4 January, emphasis added)

The 16 words in that sentence about Flight 655 came in the middle of a 531-word article about possible Iranian reprisals.

Borger’s 16 words on 4 January were a fifth of the 103 words that were all the Guardian could spare for the 1988 massacre in the whole week after the Suleimani assassination.

In all the elite print newspapers for that week, we find nine (brief) mentions of the destruction of Flight 655. That’s in the Guardian, the Observer, the Daily and Sunday Telegraph, the Financial Times, The Times and the Sunday Times.

Those nine mentions added up to just 422 words.

In other words, the elite British press effectively censored the story of Flight 655 – at a time when the British public were desperate to understand thinking in Iran, and the factors that could shape the aftermath of the Suleimani assassination.

Half of the 422-word total for the week came in The Times on a single page (7 January, p6) which told the story of the shootdown in a boxed article titled ‘Fatal flight’.

This was the only article in all the papers surveyed that revealed that 66 children were killed on Flight 655.

The Times was also the only place (on 4 January) that a reader of the elite newspapers could have discovered that the passengers on Flight 655 were ‘mainly pilgrims going to Mecca.’

These facts are well-known in Iran.

‘The shootdown of Iran Air Flight 655 is still bitterly felt in Iran.’ Very true, but not a well-known fact in Britain, because of media self-censorship.

That sentence took up half of the 27 words that the Daily Telegraph could spare for Flight 655 during the week after Suleimani’s assassination.

If the elite press wanted lessons in how to do a better job, they could have turned to the Mail on Sunday, one of the most right-wing tabloids in Britain.

On 5 January, the paper ran a piece entitled: ‘The last time raging Ayatollahs were baying for blood, an airliner blew up over Lockerbie’.

This article, by BBC journalist John Simpson, contained a full (217-word) description of the shootdown and 134 words about the aftermath, including a pipe bomb attack on the wife of captain Will Rogers of the USS Vincennes nine months after the Flight 655 massacre – which has been attributed to Iran.

On 3 July 1988, a state-of-the-art US guided missile cruiser, the USS Vincennes was engaged in clashes with Iranian patrol boats in the Straits of Hormuz when it shot down a passenger airliner, Iran Air Flight 655, on a scheduled flight from Bandar Abbas to Dubai airport. All 290 people on board were killed.

The Pentagon claimed that the civilian Airbus had been descending towards the Vincennes in a threatening manner from 9,000 feet, that it had switched off its civilian identification beacon (transponder), that it was four miles outside its ‘prescribed air corridor’, and that it did not respond to several warnings given by the Vincennes.

Within days, it had become clear that: Flight 655 was flying level at 12,000 feet at the time it was shot down; its civilian transponder was transmitting normally (this was detected by the USS Sides, another US warship in the Gulf at the time); it was well within Amber 59, the official air corridor across the Gulf; and that all but the last warning given by the Vincennes was sent on military channels that the Airbus was physically incapable of receiving.

The final warning was sent only 40 seconds before the Vincennes fired two missiles at Flight 655.

The USS Sides was, as noted, just a few miles from the scene at the time of the massacre.

Commander David R Carlson, captain of the Sides, wrote in the September 1989 issue of the US Naval Institute Proceedings that the Vincennes had gained a reputation for being an overly aggressive ‘robo-cruiser’ and ‘likely provoked the sea battle with the Iranian gunboats that preceded the shootdown.’

‘Having watched the performance of the Vincennes for a month before the incident, my impression was clearly that an atmosphere of restraint was not her long suit,’ Carlson went on.

‘My guess was that the crew of the Vincennes felt a need to prove the viability of Aegis [the highly sophisticated anti-aircraft system on the cruiser] in the Persian Gulf, and that they hankered for an opportunity to show their stuff.’

The US government never apologised for shooting down Flight 655, but it did pay $61.8 million in compensation to the Iranian victims without admitting liability.

Captain William C Rogers of the Vincennes was later given the Legion of Merit decoration (the US military’s second highest peacetime award) ‘for exceptionally meritorious conduct in the performance of outstanding service as commanding officer’ for the period including the destruction of Flight 655.

The air warfare coordinator at the time of the shootdown, lieutenant commander Scott E Lustig, received the Navy Commendation Medal for his tour of duty in the Gulf.

Milan Rai travelled to Iran with Emily Johns on a 2013 peace delegation.