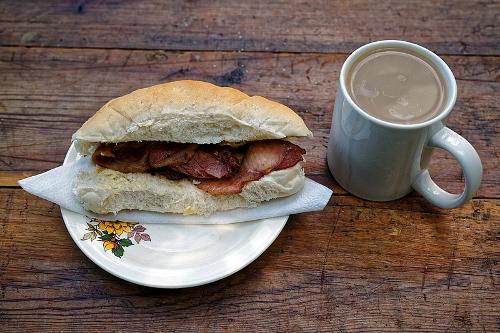 Doing the right thing isn't always the same as doing the thing that makes you feel right, argues Milan Rai

The other day, a friend told me she was sick of being bombarded with evangelical veganism on Facebook.

Posts that feel like they’re saying: ‘If you don’t become vegan, you personally are destroying the climate!’ ‘You must become vegan! Or you are a bad person!’

‘I got a message like that,’ she said, ‘and I suddenly had a very strong urge to eat a bacon sandwich. I don’t even eat bacon! I’ve maybe eaten one bacon sandwich in my life!’

Having done a lot of urgent-moral-righteous-superior communicating in my life, I can understand where these messages are coming from. There is a climate emergency. Animals are suffering and dying. People can make changes in their lives.

At the same time, as campaigners, we have to look at what our efforts are actually achieving. This isn’t just about veganism, it applies to all the different changes that our movements are trying to make.

If our social media post, or our leaflet, or our speech, or our video, or our conversation actually makes people want to (metaphorically) eat a bacon sandwich, then we may be setting our cause back.

Climate Outreach, the group who specialise in communicating about climate issues, issued a #TalkingClimate Handbook in December.

Most of those headings are self-explanatory. ‘Listen, and show you’ve heard’ is a great, non-jargon way of describing ‘active listening’ (a phrase which sounds a bit mysterious).

The ‘Action...’ section includes these valuable words: ‘We also need to talk about the many inspiring solutions to climate change that already exist. In our survey, people who were taking some kind of action – even if it felt small, personal and not in line with the extent of the problem – found it was much easier to start a climate change conversation.’

#TalkingClimate could also be seen as another way of ‘calling in’ people for their harmful attitudes or behaviour (as opposed to ‘calling them out’). (See Betsy Leondar-Wright’s wonderful explanation and example in PN 2590 – 2591.)

Deep Canvassing relies on something that doesn’t come so easily to British folk, which is opening up about our own difficulties or weaknesses to others.

It’s only one part of the Deep Canvassing process, but being vulnerable in that way seems to be essential in creating the possibility for someone to shift their attitudes.

In a New York Times Magazine article, the reporter hears the founder of Deep Canvassing, Dave Fleischer, opening up on the doorstep about his own experience of feeling different as a gay man growing up in a small, conservative Ohio town.

Because of where they’ve got to in the conversation, this sharing creates a shift. Nancy, the grey-haired Hispanic woman Fleischer is talking to, is able to connect the racism she had experienced in the US to the oppression felt by transgender people. She changes her mind about how she will vote in an upcoming referendum.

Research has found that Deep Canvassing can have a lasting effect in reducing prejudice against trans people.

A pro-Democrat group, Changing The Conversation Together, claims to have used Deep Canvassing-type techniques to help a Democrat, Max Rose, achieve an unlikely victory in New York’s 11th congressional district in November 2018.

The group targeted Staten Island, which was the only borough in New York City that voted for Donald Trump in the presidential elections. They talked to over 10,000 voters, and claimed to have shifted the attitudes of 27 percent of the people they talked to – who became more likely to vote Democrat. Rose won Staten Island by 1,100 votes.

On the other hand, research in the US in 2017 seems not to have found any effect ‘on voter turnout or policy preferences’ when deep canvassing was used in relation to environmental issues. There are limits to everything....

Oh, and my friend with the rebellious ‘bacon sandwich’ impulse said she might become vegan – but that was because she knew someone who was vegan who she admired and wanted to be more like....