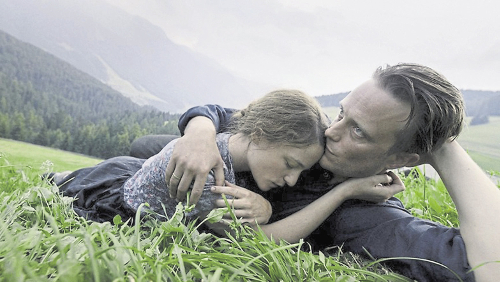 August Diehl and Valerie Pachner as Franz and Frani in A Hidden Life. Photo: Fox Searchlight

It is not often that we see our peace heroes on the big screen. It can be a source of great joy or a complete disaster. So it was with some anxiety that I watched A Hidden Life, written and directed by Terrence Malick, telling the story of Franz Jägerstätter and his wife Franziska (‘Frani’).

The name may be familiar to readers. Franz was an Austrian conscientious objector who refused to serve in Hitler’s army and who was executed in Brandenburg an der Havel in 1943.

Born in 1907, Franz came from a poor farming family in the village of St Radegund in Upper Austria. Books and newspapers were, however, a key part of the life of this avid reader. In later life he wrote: ‘For a person who never reads will never be able to stand on his own two feet; he’ll often become a mere football… kicked around by other people’s opinions.’

This reading, and the critical thinking it encouraged, was to help form his conscience.

In 1936, Franz married Franziska Schwaninger, after having fathered a daughter called Hildegard with Theresa Auer. The Jägerstätters had three daughters, Rosalia, Maria and Aloisia.

People in the village reported that Franz became more serious after his marriage. His own Catholic faith was deepened by that of Franziska.

By 1938, National Socialism was taking its hold and Franz voted ‘No’ to the annexation of Austria by Germany. He was saddened that the institutional church encouraged people to vote for the annexation.

Although he was conscripted in 1940, and undertook some minimal training, Franz was exempted from military service because farming was considered indispensable.

When called up again in 1943, Franz had come to a clear decision, ‘No power on earth has the right to suppress a person’s conscience.’

He declared his refusal to serve in the military.

He – and Frani – would have been well aware of the consequences.

“I was drawn to how the film captured the couple’s joy for life, their fidelity to one another and to God, and to the simplicity of their life set side by side with the huge decision that Franz made.”

Initially imprisoned in Linz, Franz faced harassment and torture. In July, he appeared at a military tribunal in Berlin-Tegel prison.

The transcript of the hearing declared: ‘He has arrived at his conviction that as a believing Catholic he was not permitted to perform any military service: it was impossible for him to be a Nazi and a Catholic simultaneously.’

Franz’s crime, of undermining military morale, was subject to the death penalty and, on 9 August 1943, he was beheaded.

I was not disappointed by the film. It is faithful to this story.

Malick draws on the Letters and Writings from Prison, between Franz and Franziska, edited by Erna Putz, an Austrian theologian and writer.

The film is almost three hours long, but I did not feel its passing. I was engrossed by the telling of the story, the imagery, the characters.

The slow pace beautifully captured the passing of time, the change of seasons, the painstaking thinking and discernment that ensued between Franz and Frani, even at a distance, through letter-writing, when he was in prison.

The heavy and laborious farm work of the day was authentically presented, apparently with great preparation on the part of the excellent central actors August Diehl (Franz) and Valerie Pachner (Frani).

This was important, highlighting the hardship of Frani’s life in particular; she had to keep things together once Franz had been arrested and for a long time after his death.

The film cleverly conveys the cruel ‘shunning’ of the family by the enclosed village community who felt that Franz’s decision made life difficult for them all, given the political climate of the day.

I was also held by the choice of music. Extracts from Bach’s St Matthew Passion, Górecki’s Symphony No 3, and Arvo Pärt’s Sarah Was Ninety Years Old were well chosen by the musical director James Newton Howard, to add texture and atmosphere to the story.

Franz’s deep desire to be true to his faith and to Jesus are well highlighted. We see him writing notes and essays critical of Nazi ideology and of church collusion – for Franz, the two could not sit together.

Franz wrote of the individual’s political and religious responsibilities in the face of evil. We see him conversing with priests and bishops – some of whom were personally supportive of his resolve but unable to openly endorse his stand.

I was drawn to how the film captured the couple’s joy for life, their fidelity to one another and to God, and to the simplicity of their life set side by side with the huge decision that Franz made, even with the knowledge of what this would mean.

At the end of the film I heard someone say: ‘How could he do that to his family?’ An understandably human response but one that misses a point: the inevitable cost of following one’s conscience and being prepared to accept suffering to affirm the law of love and the rejection of evil.

August Diehl and Valerie Pachner as Franz and Frani in A Hidden Life. Photo: Fox Searchlight

A Hidden Life is a Fox Searchlight Pictures production. To learn more about Franz Jägerstätter, and how his story became known and led to his beatification in 2007, Pat suggests Franz Jägerstätter – Christian and Martyr, a full-colour booklet available for £5 from Pax Christi: 020 8203 4884; www.tinyurl.com/peacenews3378

Pat Gaffney is the former general secretary of Pax Christi.