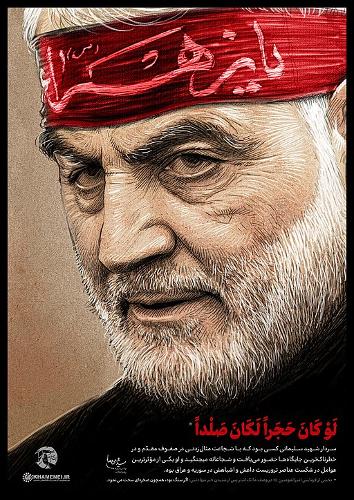 Before the US murdered him, it formed an alliance with the Iranian general – twice

Noam Chomsky and Edward Herman, who developed the Propaganda Model for understanding the western mass media, once explained: ‘That a careful reader looking for a fact can sometimes find it, with diligence and a skeptical eye, tells us nothing about whether that fact received the attention and context it deserved, whether it was intelligible to most readers, or whether it was effectively distorted or suppressed.’

In the case of Iranian general Qassem Suleimani, there were a lot of nuggets hidden in the huge flow of news reports and comment pieces that followed his assassination by the US on 3 January (along with five Iraqi and four Iranian military officers).

In this article, we’re going to stitch together some important facts about the commander of the Quds force of the Islamic Revolutionary Guard Corps that appeared in British newspapers in the week after his death. These facts generally did not receive the emphasis or attention they deserved, or their meaning was obscured by the overall framework of analysis in which they were placed.

Part of that overall media framework was that Suleimani was, first and foremost, ‘a ruthless and cynical fomentor of lethal violence against western interests’ (the first description of Suleimani in the Guardian editorial on his assassination, 4 January)

Little attention was paid in the British press to the revelation by Iraqi prime minister Adel Abdul-Mahdi on 5 January that Suleimani had been in Iraq as part of a secret Saudi-Iranian peace process.

Abdul-Mahdi said: ‘He was to come to me [the morning that Suleimani was murdered] with a message from Iran responding to the message we delivered from Saudi to Iran.’ (Guardian, 6 January)

The Iraqi prime minister said that Suleimani and an Iraqi official, Mohammed al-Hashimi, had been go-betweens in a recent Saudi-initiated move to de-escalate tensions between the two countries.

The indirect Saudi-Iranian talks were reported in the New York Times on 4 October. Saudi Arabia is known to have also begun peace negotiations with Iranian-backed Houthi forces in Yemen around that time.

The main factor in the Saudi opening to Iran is said to have been the lack of a US military response to the highly-effective cruise missile and drone attacks on two Saudi oil facilities on 14 September. While Houthi forces claimed responsibility, the US and Saudi Arabia named Iran as the attacker. Iran denied any involvement.

There’s no doubt that, during his long military career, Suleimani initiated or authorised a great deal of killing, including of young Iraqi protesters in the wave of unrest that has occurred since September (see PN 2636–2637).

However, the fact that the Iranian general was assassinated by the US while he was on a peace mission – invited to Iraq by its prime minister – makes the drone strike even more shocking.

It also raises the question of whether part of the motive for the drone strike was disrupting the Saudi-Iranian peace process, and re-establishing full Saudi subservience to the US.

US ally vs ISIS

The Financial Times had, overall, the best reporting in the British press of the Suleimani assassination. However, one headline in its 4–5 January issue was just wrong. It described Suleimani as the ‘Commander who opposed US at every turn’. Not every turn.

The same day, Guardian journalist Julian Borger reported that there was a period where the US and Iran had an ‘unspoken mutual non-aggression pact’ in their efforts to defeat ISIS, the Sunni jihadi movement that at one point ruled over eight million people in western Iraq and eastern Syria.

This is a little distorted. The Daily Mirror had a more accurate report, also on 4 January, under the title, ‘Middle East ally turned enemy’:

‘the West called on Soleimani’s help after ISIS began to sweep through [Iraq]. The general sent three planes full of advanced weapons to Baghdad, and went into the warzone and personally directed the fighting. Former CIA officer John Maguire said that Soleimani had probably turned the tide against the terror group. He said: ‘It’s an inspiring message that this man is fearless and we must follow.’

Part of Suleimani’s inspirational image was that he ‘never wore a flak-jacket in action’ (John Simpson, Mail on Sunday, 5 January).

One of Suleimani’s major achievements in Iraq and Syria was his ability to organise fervently-religious militias like the ones which formed the backbone of Iraq’s ‘Popular Mobilisation Units’. The PMUs, often armed, funded and trained by Iran, played a huge role in turning back and then defeating ISIS in 2014 – 2015. This was after the US-trained Iraqi army had fallen to pieces in the face of the jihadists and left Iraq defenceless.

Suleimani negotiated the unlikely co-operation of Kurdish fighters and Arab PMUs which was crucial to defeating ISIS. Vali Nasr, an anti-Suleimani Iranian-American academic, pointed out that: ‘Iraqis can be simultaneously unhappy over Iran’s meddling [in their country] but still have a warm view of Qassem Suleimani who they credit with defending the south against Isis and who was the one who showed up in Erbil with enormous amounts of weaponry to provide defence for the Kurds.’ (Observer, 5 January)

Suleimani showed talent in forming and training militias at the very beginning of his military career, when he recruited a group of young men from his home town in 1980 to fight in the Iran-Iraq war, which had just broken out. (The group grew and became a brigade ‘which still exists as a major military unit’, according to a friend of Soleimani quoted in the FT on 4 – 5 January.)

This 1980 grouping was just the kind of ‘voluntary, ideologically-motivated militia’ that Suleimani later formed and trained in Syria (the Jaysh al-Sha’bi) and Iraq (the PMUs or Hashd al-Sha’bi). (Najmeh Bozorgmehr, FT, 4 – 5 January)

The Guardian (4 January) noted that Suleimani formed an ‘unofficial alliance’ with the US in the war against ISIS, ‘with US airstrikes supporting his ground forces’. That is more than a ‘mutual non-aggression pact’.

Iraqis used to say of the US and Iran: ‘They wave their fist at each other over the table and shake hands under it.’ (Patrick Cockburn, i, 7 January)

The combination of US airpower and Iranian-backed ground forces was critical to the defeat of ISIS. The 3 January killings have broken that ‘unofficial alliance’ and left ISIS the ‘one clear beneficiary of the Soleimani assassination’ as Patrick Cockburn pointed out (i, 9 January) among many other people.

The fight against ISIS was not the first time Suleimani had co-operated militarily with US forces. ‘[F]ew people remember that his first major mission as commander of the Quds force – the extraterritorial branch of Iran’s Revolutionary Guards – involved implicit coordination with the United States as the US invaded Afghanistan in 2001.’ (Mohammad Ali Shabani, Guardian, 4 January)

‘In a BBC documentary, Ryan Crocker, then US ambassador to Syria, told of meeting Soleimani in Geneva. He said: “He produced a map that showed the Taliban order of battle throughout Afghanistan, and he accompanied that with the advice that we strike certain targets first.”’ (Daily Mirror, 4 January)

Iran–US co-operation broke down after then-US president George W Bush named Iran as a member of the ‘Axis of Evil’. (There is a lot more to the story, including help Iran offered to give against al-Qa’eda, which it withdrew after Bush’s speech, which meant a number of jihadist leaders escaped.)

A national icon for Iran

‘The scale of the crowds [in the holy city of Mashhad], which clogged the streets for miles, were said by witnesses to dwarf anything seen in Iran since the funeral of Ayatollah Khomeini, the founder of the Islamic Republic, in 1989. Although Iran’s regime is known to order people onto the streets for pro-government demonstrations, they seldom muster more than a few thousand.’ (Telegraph, 6 January)

Najmeh Bozorgmehr of the FT gave this assessment: ‘for Iranians, even those critical of the regional and defence policies Soleimani championed, he is a source of national pride. Many Iranians attribute the defeat of the jihadi group Isis in Syria and Iraq to Soleimani’s policies, as well as the fact that Iran’s security has remained intact despite broader turbulence in the region.’

Bozorgmehr gathered these reactions in Iran immediately after the assassination:

Zahra, 40, a lawyer, not a supporter of the general: ‘I feel frozen and cannot help staring at the wall since this morning. What is going to happen to us without him? Our miseries are worsened every day.’

Majid, 48, a pro-reform computer engineer: ‘I feel extremely saddened and lost. Regardless of my political inclinations, it feels like we have lost a legendary hero, similar to Persian myths, as if Iran’s savior and the symbol of our security has been killed.’

Saeed Laylaz, ‘an expert of Iran’s political economy’: ‘Soleimani was the only public figure in Iran who could help create national unity in times of crisis, as if he was friends with prisoners and jail-keepers alike.’ (Financial Times, 4 – 5 January)