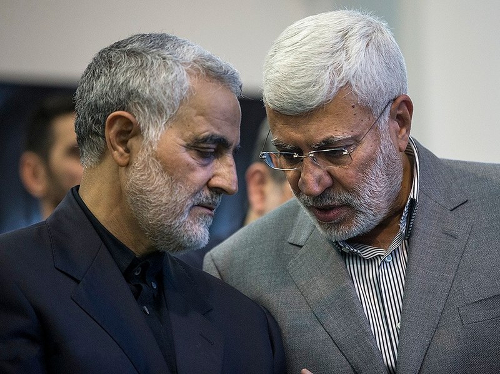 In the past few weeks, there has been much outrage in the British media at Iranian ‘meddling’ in Iraq over the past 17 years. Iran’s interference in Iraq was directed for most of that time by Iranian general Qassem Suleimani, probably the most powerful non-Iraqi in Iraq until he was assassinated in Baghdad by the US on 3 January.

There has not been much attention paid to the fact that Iran could only intervene because of the disintegration of Iraq because of the US-UK invasion of 2003 – the crime of the century – and the policies imposed on Iraq by the US-led occupation.

The invasion and the occupation destroyed the previous national identity held by most Iraqis and supercharged sectarian differences between the majority of Iraqis who subscribe to Shia Islam and the previously dominant Sunni minority. (Iran is also a Shia majority nation, and a Shia Muslim state.)

The violent conflicts the occupation provoked in Iraq provided both an opportunity for Iran to intervene, and pressure to stabilise (and control) a neighbouring state. We should not forget that Iraq invaded Iran in 1980, leading to a brutal 10-year war that killed a million people and that continues to shape Iranian political life.

Anshel Pfeffer of the Israeli newspaper, Haaretz, wrote in the Sunday Times that western intelligence and US diplomats gradually ‘became aware of Soleimani’s influence as the only effective government [in Iraq] proved to be made of officials directed by Iran.’ (5 January)

Very little attention has been paid to the fact that Suleimani was murdered on Iraqi soil, in the company of senior Iraqi military figures – who were also killed. Iraq is seen as a defeated nation that does not pose a threat to western interests, and therefore it has been disregarded in media coverage and political reaction.

Little attention has been paid, for example, to the rage of Iraqi prime minister, Adel Abdul-Mahdi, speaking for his nation in front of the Iraqi parliament on 5 January. Abdul-Mahdi described the Baghdad airport massacre as ‘aggression’ and said: ‘Carrying out physical liquidation operations against leading Iraqi figures or from a brotherly country on the Iraqi lands is a flagrant violation of Iraq’s sovereignty and a dangerous escalation that triggers a destructive war in Iraq, the region and the world.’

Very few of the initial reports of the Baghdad airport massacre even named the five Iraqis or four Iranians who were killed alongside Suleimani.

The most prominent person to be killed on the Iraqi side was Jamal Jafaar Mohammed Ali Ebrahimi, 56, better known as Abu Mahdi al-Muhandis (muhandis means ‘engineer’).

When he was mentioned, Muhandis was usually described as a militia leader. The Guardian profile of Muhandis described him as ‘a key leader in the Shia militias... employed as shock troops in the bloody fight against Islamic State in Iraq’.

This is true, but misleading, in that (a) the militias, the Popular Mobilisation Units (PMU), had been officially incorporated into the Iraqi military, and Muhandis reported directly to the Iraqi prime minister and (b) the PMU had a political wing, the Fatah Alliance, that won the second-largest number of seats in the Iraqi parliament in the 2018 elections.

The FT noted: ‘After Baghdad declared victory over ISIS, the militias were hailed as heroes, paving the way for the groups to extend their influence across politics, security and the economy.’ (7 January)

So Muhandis was actually a senior Iraqi military leader, and also an important political figure linked to one of the largest parties in parliament. His reputation rested on the success of the PMU in defeating (with Iranian weapons and training and US airstrikes) the ISIS insurgency that came close to taking over the country.

“Iraq is seen as a defeated nation that does not pose a threat to western interests.”

Speaking of the killing of Muhandis, Iraqi prime minister Abdul-Mahdi said to parliament: ‘The assassination of an Iraqi military commander is an aggression on Iraq as a state, government and people.’

It’s hard to imagine a British parallel, but let’s try.

Imagine if the IRA had somehow managed to take over the northern half of Ireland, Wales and the west of England, so that it was only miles from London, and Britain’s regular armed forces had fallen apart in the face of this threat, and the volunteer territorial army had risen up and defeated the IRA, and, on the back of its success, formed a political party that, three years later, became the second-largest party in Westminster with nearly 100 seats.

Would we describe the commander of this triumphant territorial army as just ‘a militia leader’?

(Of course, there are lots of problems with this analogy, including the fact that the IRA has never sought to control territory outside Ireland and is not a religious organisation – and Britain’s territorial army is not made up of guerrilla fighting units that have been active, in some cases, for decades.)

In terms of titles, Muhandis was the ‘deputy leader’ of the PMU.

However, as Peter Beaumont pointed out in the Guardian: ‘Although he worked under Faleh al-Fayyadh, Iraq’s national security adviser, Muhandis was widely recognised as the [PMU]’s real leader.’ (4 January)

Muhandis started his career with the Dawa party, a Shia group that was severely repressed by Iraqi leader Saddam Hussein in the 1970s. Muhandis was driven into exile in Iran and, in the 1980s, became commander of the Badr Corps, made up of anti-Saddam Iraqis, based in Iran.

After the US-led invasion of Iraq in 2003, Muhandis helped to create and then led the Kata’ib Hezbollah militia, a core part of the PMU forces in the war against ISIS.

David Patrikarakos, an academic at St Andrews university, wrote: ‘Iran observers have commented that Muhandis, who was tremendously loyal to the [Iranian] regime, was the one man who connected the different groups under the [PMU] umbrella, having created several of them. The group will recover, but right now it is wobbling.’ (Sunday Telegraph, 5 January)

When an international crisis involves a favoured state, the timelines you see in the media are often very misleading.

With the assassination of Iranian general Qassem Suleimani, all British newspapers started their timelines on 27 December 2019: ‘In the latest tit-for-tat round of the proxy war in Iraq [between the US and Iran], an American contractor had been killed in a rocket attack a week ago, triggering retaliatory airstrikes against Iranian-supported militia camps. This in turn led to the storming of the US embassy compound by pro-Iran militiamen, in which no one appears to have been hurt.’ (Guardian, 4 January)

Almost the only evidence challenging the starting point for this timeline came from Patrick Cockburn, one of the best British reporters on the Middle East for many years.

In the Independent/i on 4 January, Cockburn reminded readers of his interviews in late September with leaders of several Iranian-supported Iraqi militias (PMUs) which have been part of the Iraqi military since 2016.

The PMU leaders ‘all claimed that the US and Israel were escalating attacks on them inside the country’.

Abu Alaa al-Walai, leader of Kata’ib sayyid al-Shuhada (a splinter group of the now-famous Kata’ib Hezbollah), told Cockburn that 50 tons of weapons and ammunition had been blown up in one of his camps in August.

Cockburn reported in September: ‘The Israelis confirm that they carried out the raid, which was preceded by several others, claiming that they hit Iranian missiles on their way to Syria and Lebanon.’

The PMU leader told Cockburn the Israeli drones had been launched from a US base in north-east Syria. Whether or not this is true, Israel must have had a green light from the US for its attacks.

On 5 January, the Iraqi prime minister, Adil Abdul-Mahdi, told the Iraqi parliament that the US had informed him that Israel carried out many of the attacks on PMU bases.

So, the 27 December missile strike on the US ‘K1’ military base in northern Iraq was not an unprovoked assault, but part of a cycle of violence that began in August with a US-initiated and US-directed large-scale assault on Iraqi PMU bases.

One small incident in that cycle of violence was reported by Xinhua, the official Chinese news agency, on 19 December. A US parachute assault on al-Baghdadi, about 90 miles north of the Iraqi capital, captured a prominent Sunni PMU leader.

Naseer al-Obeidi was detained on suspicion of involvement in a 3 December rocket attack on the nearby Ain al-Asad airbase, where hundreds of US troops are stationed. (There were no casualties.)