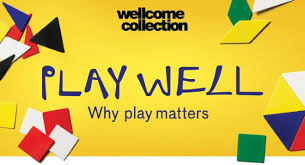 Play Well is a wonderful, joyful, mind-prodding exhibition at the Wellcome Collection in Central London on the importance of play in child development, in mental healthiness and emotional resilience.

It reaches from Rousseau’s treatise on education to computer gaming. The pedagogies of play shaped Paul Klee’s art, Buckminster Fuller’s design, the Bauhaus movement and Frank Lloyd Wright’s architecture and from town planning to identity politics toys and psychotherapy.

Above all, through the lens of this innate instinct for playing, Play Well examines what it is to be human.

Much of the exhibition examines philosophies of play and the formal application of these ideas by teachers and designers beginning in the early 19th-century with Friedrich Froebel. He devised the kindergarten (literally: ‘children’s garden plot’) and ‘Gifts’ (a series of objects and materials that an adult provides progressively to support child-directed learning through infancy).

Play Well covers not just adult-theorised and -initiated play but also the play of child-organised, child-owned culture documented most famously by Iona and Peter Opie with their collections of street and playground games and songs. Their work is updated to the present day with recordings of the evolution of song words of my childhood to include mobile technologies and social media.

There is a thread that explores control and liberation in play. This culminates in a film by Eva Rothschild of boys in wild exuberance dismantling and destroying her sculpture exhibition at the Whitechapel Gallery in London (a delightful film of freedom albeit permitted and managed by the artist).

The beautiful photographs of children playing in the mid-20th century in the unauthorised spaces of a graveyard (by Bert Hardy) and rubbish dumps (by Shirley Baker) are counterpointed by a powerful map of the shrinking of permitted solo roaming areas of four generations of a family in Sheffield when each of them was eight-years-old. The great-grandfather had a six-miles-from-home territory and his greatgrandson is allowed to the end of the street.

The frontispiece to Jean-Jacques Rousseau’s treatise shows infants tumbling around a mother in a bucolic landscape. We associate play with an environment of safety and ease. And yet, through the show, war and its aftermath figure prominently in stories told in films and photographs.

For example, mothers in Reggio Emilia, in northern Italy, sell an abandoned tank in 1945 to fund a pre-school where play and playfulness is foundational to their children’s exploration, research and experience: an approach that now has world influence.

Psychologists such as Winnicott discover that it is play itself that creates security.

We see photographs by Mark Neville of a little Ukrainian girl just after shelling has happened, she energetically plays out the experience.

We see the intervention of adults who build Play Labs that recreate a familiar home environment for Rohingya refugee children to provide a space where play can be maximised.

It intrigued me that this seemed to contradict Marjorie Allen’s observations in Denmark in 1945 where she saw children building their own magical worlds for themselves on bomb sites. She took her observations back to England and created the adventure playground movement where children have the tools to build their own spaces.

Maybe as a society we are tending towards the nurture principle where the adult gives a Gift, despite decades of study that show that nature takes the gifts of found objects, cardboard boxes, fingers and toes and makes meaningful magic from them.

How the nature and nurture of play entwines and how the child is cherished or directed or facilitated or encultured can be thought about through many of the exhibits. The many tantalising tasters have given me a little knowledge and have made me want to find out more.