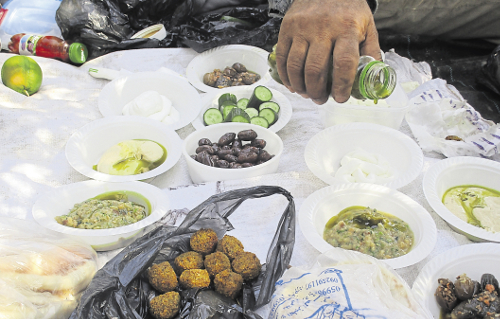 From Wales to the West Bank

For a start, I never imagined that I was going on a holiday when I signed up to go with a Peaceful Presence group to help with the olive harvest.

I knew that it would be hard work and that I might witness things that would distress me. Since I came home, I’ve found it difficult to talk about the visit. Knowing intellectually about the situation didn’t prepare me for the visceral effect of actually being in the West Bank. Hence, my difficulty in explaining the experience to others.

The group I went with has the umbrella title of ‘Friends of Madama and Burin’ as these are the two main towns supported by the group.

There were 21 of us. When we arrived, we split into two groups, one staying in Burin and the other in Madama, about half an hour’s walk away.

Each day, we would split into small groups and go out with local farmers and their families to pick the olives.

The first two days were idyllic. The weather was amazing and the rhythm of picking the olives became quite meditative. We worked hard, stopping only for a quick cup of tea and then again for lunch.

Lunches were delicious, with the Palestinian families providing an amazing spread of home-made hummus, falafel, olives and much more. This time of day became one we all looked forward to, as picnics would vary from family to family, with some being more elaborate than others.

Four of our main group were attacked by Israeli settlers. The olive groves of Burin lie very close to one of the most fundamentalist settlements and they are therefore always vulnerable during the harvest season.

The attack happened out of the blue, when around 40 masked Israelis appeared, wielding iron bars and wooden clubs. They began beating everyone, including two Jewish rabbis who are part of a Peace and Justice movement.

An 80-year old had his arm broken in two places and another volunteer had severe cuts to his head, both needing hospital treatment.

The people from our group said they had feared for their lives, as the attackers appeared out of control. Running away in the difficult and steep terrain left them extremely vulnerable. They suffered bad bruising and swelling, and the trauma caused one volunteer to go home.

Over 100 olive trees were burnt in the same attack.

After that day, we all became conscious of the seriousness of the situation and of the need for vigilance. The remainder of our two weeks saw further attempted attacks and more burning of olive groves – and no effort by the Israeli army or border control to do anything about it!

This is the day-to-day life faced by the Palestinian people in the West Bank. Having to ask for permits to enter their own land to harvest their own olives, suffering frequent attacks from settlers, and – seemingly on a whim – being thrown off their land by the army, are just some examples of their hardship.

Yet, through it all, they remain the most wonderful, inspiring, resilient and hopeful people that I’ve ever met.

More info from Zaytoun, which organises both the Taste of Palestine culinary tour (7–16 October 2020) and the Protective Presence trip every autumn:
www.tinyurl.com/peacenews3376