MAW at a climate conference 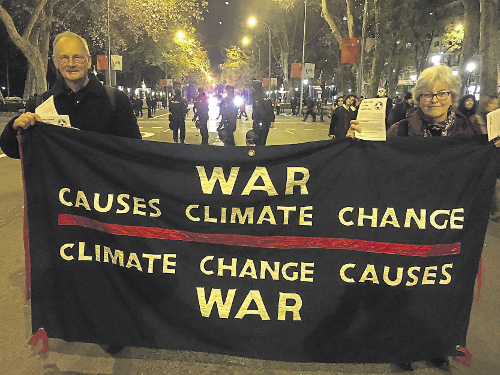 David Collins & Hilary Evans on their experiences at COP25

Movement for the Abolition of War’s eye-catching banner ‘War causes climate change – Climate change causes war’ caused an international stir in December when it travelled to Madrid to take its message to the UN climate conference COP25.

The banner was seen and photographed by thousands of delegates and visitors entering the conference centre – and by many more on the 500,000-strong Friday evening climate march through Madrid (led by Greta Thunberg).

MAW has long believed that issues of peace, justice and environmental integrity are inextricably linked and must be addressed together

Scientists for Global Responsibility (SGR) estimates that 6 percent of global greenhouse gas emissions result from military-related activity and this was at the core of our (seemingly unique) message in Madrid.

It is well recognised now by major charities and others that climate change can lead to soil degradation, competition for resources, mass migration, instability and war. What is still barely mentioned is the first half of the vicious circle described by the banner.

SGR’s 6 percent figure covers the whole military-related process from start to finish: ore extraction and manufacture of equipment and weaponry; trials and training with massive fuel use; maintenance of vast numbers of buildings; use of fuels and explosives in war, plus resulting fires; extensive rebuilding of devastated infrastructure.

Astonishingly, we could find no mention of this aspect in the Madrid conference programme or at the public events and displays in the public Green Zone, or at the complementary ‘Social Summit’ held across town at the university.

Perhaps this shouldn’t be surprising since the precedent was set at Kyoto in 1997, when it was decided, under pressure from the US, that there would be no obligation on countries to count these emissions or include them in reduction targets.

Since all delegates are government officials, can we rely on them to address the subject of climate change and militarism when this may risk jeopardising lucrative arms and military aid contracts?

Disappointingly, the paper prepared by one of us (David Collins) on the topic got no further than the waiting list for a slot at one of the official side events.

In his paper, David cites the Oxford Research Group. Apparently, ministry of defence advice to policymakers is governed by the principle that even a 1 percent chance of a security risk materialising is unacceptable.

This goes a long way to explaining the need for the immense sums spent by the military.

Whether large or small, fictitious or true, a tiny security threat means more ships for the navy, more tanks, more aircraft and weaponry to ‘make us safe’.

It also creates the anxiety in the population that is necessary to create public support for military expenditure and warfare.

In contrast, the unfolding climate catastrophe is not a 1 percent or a 20 percent or even a 90 percent risk.

At a time in the near future, it is plainly 100 percent.

We are past the moment when doubt gives an excuse for inaction. Global heating has been in plain view for over a century with the work of Tyndall in 1859 and Arrhenius’s first calculation of global warming from human emissions of CO2 in 1896.

The basic facts of the science have been indisputable for over 40 years, and the children and youth of the entire world are rightly demanding that from this moment all resources should now be concentrated towards averting the extinction of human and animal life on earth.

That funding could be readily available now from existing military budgets.

We have to stop believing that war is inevitable and accept that international climate finance offers overwhelmingly better value in both resolving conflict and sustaining the environment than the equivalent spent on military operations.

Even without official participation, our visible presence in Madrid was worthwhile.

We distributed flyers, had many useful conversations and made good contacts with whom we will keep in touch.

Preparations for an even more effective participation at COP26 in Glasgow in November are already underway, including filing a UN accreditation application for MAW

David Collins and Hilary Evans are members of Movement for the Abolition of War. David is also a member of Veterans for Peace UK.