US: a terrorist state 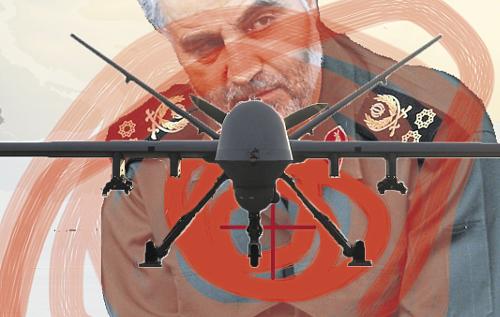 US commentator Noam Chomsky described the Suleimani assassination to the Hindustan Times as ‘at least international terrorism, arguably worse.’

As well being aggression against the territory of Iraq, the assassination was the latest in a long line of acts of violence against Iran by US forces, including the 1953 coup that overthrew Iranian parliamentary democracy and established the brutal dictatorship of the Shah of Iran

The Baghdad airport airstrike was also part of a long-standing pattern of ‘extra-judicial killing’ by the US government.

The illegal use of force across national boundaries is international terrorism, whether carried out by states or groups.

US president Gerald Ford banned assassination in 1976 after an official inquiry the previous year, led by US senator Frank Church, found the US had been involved in several plots to assassinate foreign leaders.

Separately, Central Intelligence Agency official William Colby (later head of the CIA) told the US congress in 1971 that the CIA had carried out 20,000 village-level assassinations in South Vietnam since 1967 in the ‘Phoenix’ programme to undermine the anti-US resistance there.

The assassination ban has not stopped US state murders.

Recently, US president Barack Obama massively expanded the use of airstrikes to carry out extra-judicial killings.

According to the Bureau of Investigative Journalism, Obama’s airstrikes killed between 384 and 807 civilians.

Several international lawyers agreed that the 3 January strike was illegal. ‘The United States had no justification to carry out this strike,’ University of Notre Dame law professor Mary Ellen O’Connell told USA Today. She specialises in international law and the use of force.

The UN special rapporteur on extra-judicial executions, Agnès Callamard, responded on Twitter on 3 January that states can only take this kind of military action ‘if the threatened attack is imminent, no other means would deﬂect it, and the action is proportionate.’

Callamard went on: ‘The test for so-called anticipatory self-defence is very narrow: it must be a necessity that is “instant, overwhelming, and leaving no choice of means, and no moment of deliberation”. This test is unlikely to be met in these particular cases.’

After producing different stories about the threat from Suleimani, without providing evidence for any of them, on 13 January, US president Donald Trump tweeted that the question of imminence ‘doesn’t really matter because of his [Suleimani’s] horrible past!’

This means that, according to Trump, his main justification for the Baghdad airport strike was revenge. This confirms that the strike was illegal: murder, a massacre, terrorism.