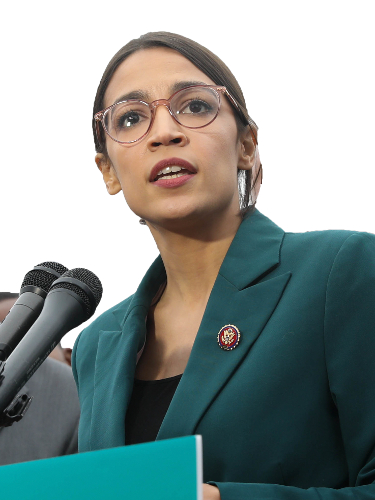 On 7 February, a radical new congressmember from New York, Alexandria Ocasio-Cortez (known as ‘AOC’), introduced legislation into the US house of representatives calling for a ‘Green New Deal’. Fellow Democrat Ed Markey introduced the same resolution into the senate on the same day.

“Human activity is the dominant cause of observed climate change over the past century.” - US congressmember Alexandria Ocasio-Cortez

At the time of going to press, over a fifth of the 435 members of the house of representatives were signed up as co-sponsors, along with 12 senators out of 100.

Perhaps more importantly, the Green New Deal resolution has won the support of at least eight of the politicians seeking the Democratic presidential nomination in 2020, including heavyweights such as Cory Booker, Kamala Harris, Beto O’Rourke, Bernie Sanders and Elizabeth Warren.

Earlier, AOC had sought to turn the toothless climate change committee into a Green New Deal committee with subpoena powers which would draw up a detailed plan for an economic transformation. The Democratic leadership said no.

The New Deal was a US government programme in the mid-1930s which aimed to counter the effects (in the US) of the global economic collapse we call the Great Depression. The New Deal built masses of critical infrastructure (hospitals, schools, roads, dams, bridges and so on); subsidised and supported farmers; introduced a minimum wage, state pensions and stronger union rights; created national standards for new homes; reformed the financial sector; and brought in unemployment and welfare benefits.

Many organisations around the world have called for a ‘Green New Deal’ to counter both climate change and economic injustice. For example, the Green parties in the European Union’s parliament responded to the financial crisis of 2008 with a report in 2009 called ‘A Green New Deal for Europe: Towards green modernization in the face of crisis’.

The new US resolution calls for an extremely ambitious plan that would involve rapidly ‘decarbonising’ the US economy (reorganising it so that there are no greenhouse gas emissions); investing trillions of dollars in emissions-reducing public works; providing decently-paid jobs for everyone who wants one; and protecting marginalised communities who’ve contributed least to climate change but who suffer the most from its impact.

In order to build the biggest possible coalition, the resolution does not repeat AOC’s earlier call for US electricity to come only from renewable power sources (solar, wind, wave). It leaves the door open for nuclear power and fossil-fuel-burning-with-carbon-capture by talking about ‘clean, renewable, and zero-emission’ energy sources.

The resolution also doesn’t oppose or endorse carbon pricing (which could mean a carbon tax, or an emissions trading system, or some other market mechanism).

These debates have been postponed for a later day.

Recognizing the duty of the Federal Government to create a Green New Deal.

Now, therefore, be it Resolved, That it is the sense of the House of Representatives that —