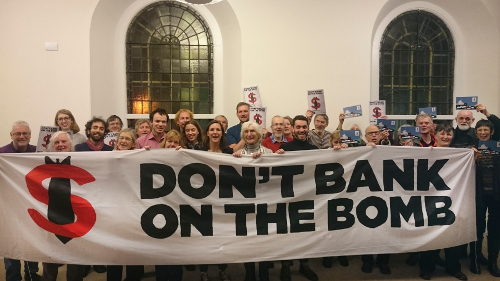 A Scottish peace initiative focused on the power of money 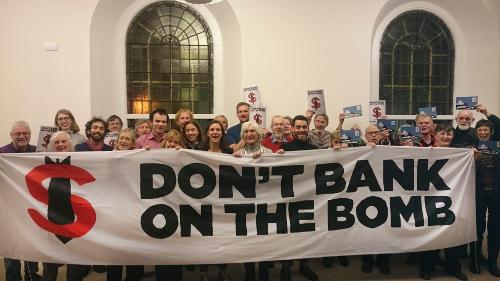 The ‘Don’t Bank on the Bomb’ campaign for Scotland was launched at a public meeting in Edinburgh on 16 November 2015. Photo: Edinburgh Peace and Justice Centre

In September 2018, the ‘Don’t Bank on the Bomb Scotland’ campaign group (DBOTB Scotland) published a guide for divestment from nuclear weapons entitled Stop Funding the End of the World – Working to Eliminate Nuclear Weapons Through Divestment: A Guide for Scotland.

The guide was launched as part of the Nae Nukes international series of events in Scotland including a march and demonstration at Faslane. The aim of the divestment movement in Scotland is to persuade Scottish companies and organisations to stop providing financial support in the form of loans and investments to companies which are involved in the production of nuclear weapons. This will in turn pressurise these companies to halt nuclear weapons production.

Divestment has been shown to work in the case of cluster munitions.

Organisations that finance nuclear weapons producers are backing war over peace, as the success of their investments relies on the continuation of conflict and heightened tensions in international politics. The risk to our survival posed by nuclear weapons is demonstrated by their sheer number and the probability of catastrophic atmospheric changes in the event of even a small percentage of those weapons being used. The only way to ensure the survival of our species is to totally eliminate nuclear weapons.

Nuclear weapons will be illegal under international humanitarian law when the UN Treaty on the Prohibition of Nuclear Weapons comes into force. It is widely accepted that organisations who financially support nuclear weapons producers will find themselves on the wrong side of international law.

Several companies which have bases and factories in Scotland such as Thales and BAE Systems are ranked in the top 20 nuclear weapons producers in the world. A majority of the producers featured on the top 20 list have benefited from Scottish funding whether through loans or investment.

The Scottish local government pension scheme (LGPS) is the largest public pension scheme in Scotland. It has over half a million members and £42 billion in assets. The LGPS fund is administered by pension committees in 11 fund administering authorities.

“Investing in nuclear weapons producers is out of step with public opinion in Scotland.”

Information drawn from the authorities’ websites and compiled from Freedom of Information requests shows that the Scottish LGPS holds shares worth approximately £294 million in 14 major nuclear weapons producers. (A detailed breakdown of investments is included in the full guide.)

Recent analysis by the Scottish investigative journalism co-operative, The Ferret, and by the independent online Scottish magazine, CommonSpace, showed that the pension fund had £175,495 invested in Rolls Royce. Rolls Royce is a significant contributor to the UK nuclear weapons programme.

This investment goes against the avowed principles of both the Scottish government and the majority of MSPs – who have been vehement in their opposition to Trident renewal. Stop Funding the End of the World also looks at the financial investments of Scottish universities. Most notably the University of Glasgow holds over £1.6 million worth of shares in 11 nuclear weapons producers while the University of Strathclyde holds shares worth £336,963 in BAE Systems.

A breakdown of the investments and public policies of other Scottish universities can be found in the guide.

There are a number of Scottish financial institutions financing nuclear weapons. Two feature in the international ‘Don’t Bank on the Bomb’ hall of shame. RBS group and Standard Life Aberdeen between them made over £2.8 billion available to 15 of the top 20 nuclear weapons producers between 2014 and 2017.

Lloyds banking group, which includes Bank of Scotland and which has a registered headquarters in Edinburgh, made £1.9 billion available to 12 of the top 20 companies during the same period. Full details of these institutions’ investments can be found in Stop Funding the End of the World.

The key aims of the nuclear weapons divestment movement and what steps we can take to achieve these are outlined in Stop Funding the End of the World.

Stop Funding the End of the World, published by Don’t Bank on the Bomb Scotland, was written by Linda Pearson. The core Don’t Bank on the Bomb Scotland group is comprised of Linda Pearson (Edinburgh CND), Dr Guy Johnson and Dr Michael Orgel (Medact Scotland), Arthur West (chair, Scottish CND) and Brian Larkin (Edinburgh Peace and Justice Centre). If you have questions about the campaign or want to start your own local DBOTB campaigning group and want more information you can contact them by email, details on their website.You can also download the full guide, Stop Funding the End of the World, from the DBOTB Scotland site (as well as the global DBOTB report):
nukedivestmentscotland.org