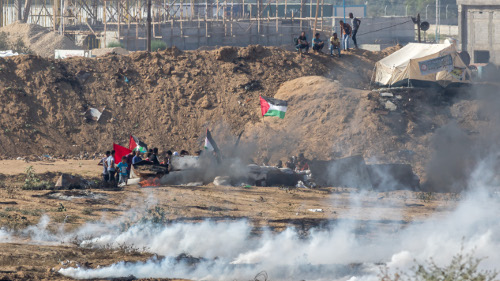 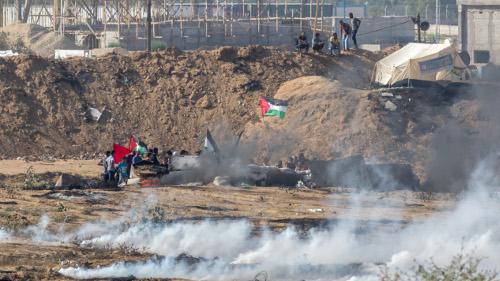 Below is the official summary of the UN human rights council’s independent international commission of inquiry into the weekly demonstrations in Gaza, named ‘the Great March of Return’, that began on 30 March, 2018. It is followed by an extract on the events of 14 May 2018.

The Commission found reasonable grounds to believe that during these weekly demonstrations, the Israeli Security Forces (ISF) killed and gravely injured civilians who were neither participating directly in hostilities nor posing an imminent threat to life. Among those shot were children, paramedics, journalists, and persons with disabilities. 183 people were shot dead, another 6,106 were wounded with live ammunition.

The demonstrations were organised by a ‘Higher National Committee,’ whose members came from all sectors of Palestinian society, including civil society, cultural and social organisations, students unions, women’s groups, eminent persons, members of clans and representatives of several political parties.

While the demonstrations were civilian in nature, bringing them under a law enforcement legal paradigm, they were at times violent, including throwing stones, cutting through the separation fence, and launching incendiary kites and balloons.

The Commission found, however, that the use of lethal force in response was rarely necessary or proportionate. For lethal force to be permissible, the victim must pose an imminent threat to life or limb. The ISF violated international human rights law in most instances the Commission investigated.

ISF conduct also violated international humanitarian law, which permits civilians to be targeted only when they ‘directly participate in hostilities.’ This purposefully high threshold was not met by demonstrators’ conduct, in the view of the Commission, with one possible exception on 14 May.

The Commission found that twenty-nine people killed during demonstrations were members of organised armed groups, with another 18 of undetermined status. The Commission took the view, however, that is unlawful to shoot unarmed demonstrators based solely on their membership in an armed group, and not on their conduct at the time. It is equally unlawful to target them based on political affiliation.

1,576 people were wounded by bullet or bone shrapnel that resulted from ricochets, bullet fragmentation and shots going through one body into another - clearly illustrating the danger of firing high-velocity live ammunition into a crowd of demonstrators.

The Commission found that the content and the application of the Israeli forces’ rules of engagement contributed to the unlawful approach. The rules permitted status-based targeting of the legs of individuals deemed to be ‘key inciters/key rioters’, defined by conduct such as burning tyres, cutting or breaching the fence, exhorting/leading the crowd. Under these rules, 4,903 persons were shot in the lower limbs – many while standing hundreds of metres away from the snipers, unarmed.

Unless undertaken lawfully in self-defence, intentionally killing a civilian not directly participating in hostilities is a war crime. Serious human rights violations were committed which may amount to crimes against humanity.

The Commission also found that the Palestinian Authority and the Gaza de facto authorities bear responsibility for failing to uphold the right to peaceful assembly in connection with demonstrations policed by their respective security forces in June 2018.

On Monday 14 May, the Great March of Return demonstration was scheduled to coincide with the opening of the US Embassy in Jerusalem and the 70th anniversary of the Nakba. The demonstrations were labelled ‘The Return of a Million.’ An estimated 35,000–40,000 people attended the demonstrations on 14 May, the highest number of demonstrators since 30 March.

14 May was marked by an increase in violence by the ISF and demonstrators. Many primarily young and middle-aged men slung or threw stones, shouted slogans and burned tyres, which created a wall of smoke. Some demonstrators cut or pulled away the barbed wire coils or approached the separation fence. In the afternoon, two demonstrators from El Bureij crossed the separation fence and set fire to an empty ISF berm. The ISF shot them as they ran back to the Gaza side of the fence, killing one and injuring another in the leg.

The ISF released pictures of grenades and other improvised explosives that it claimed had been thrown or launched by slingshot across the separation fence at the ISF. While the Commission saw video of demonstrators slinging and throwing stones and empty tear gas canisters, it could not confirm that demonstrators threw or launched explosive devices towards ISF soldiers during the protests. The ISF also described being shot at. In the course of its investigation, the Commission sought information from the IDF regarding alleged shooting incidents but did not receive a response.

In total, Israeli security forces shot at least 1,162 people with live ammunition; some 141 were wounded by bullet fragmentation or shrapnel, marking the ‘highest one-day death toll in Gaza’ [60 – ed] since Israel’s 2014 military operation in Gaza.

The ISF also killed a paramedic, Musa Abu Hasaneen, with a shot to the chest and injured 15 health workers from the Palestinian Civil Defence and Palestinian Red Crescent Society (PRCS) field medical teams.

On the Israeli side, one soldier was lightly wounded, reportedly by a stone.

According to one medical organisation providing first aid to demonstrators, they treated more than 3,000 people in three hours.

The Commission considers that the following cases were emblematic of the ISF’s response to the demonstrations at Gaza City on 14 May.

10.30am, killing of Yasser Habeeb (24). Yasser Habeeb was a 24-year-old from Gaza City. The ISF shot him in the neck around 10.30 am According the Commission’s investigation, he was approximately 100m from the fence. He had been throwing stones at the ISF and burning tyres. He died on 25 May 2018.

The Commission finds that Yasser did not pose an imminent threat of death or serious injury to ISF soldiers when he was shot.

Mid-morning, killing of Husein Abu Aweida (41) The ISF shot 41-year old Husein Abu Aweida, a food and beverage seller, in the back. According to eyewitnesses he was approximately 150m from the separation fence when he was shot. A surgeon told the media that his spine had been severed and that fragmentation had caused damage to his liver and lungs. He survived for several days, finally succumbing to his injuries on 26 May 2018.

The Commission finds that Husein did not pose an imminent threat of death or serious injury to ISF soldiers when he was shot.

The Commission finds that Mahmoud did not pose an imminent threat to life or serious injury to ISF soldiers when he was shot. [Many more examples are given in the report – ed.]

Download the detailed report which was published on 18 March: www.tinyurl.com/peacenews3247