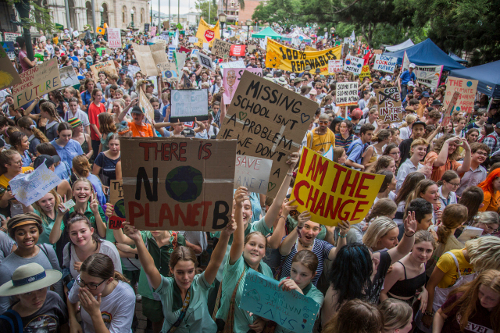 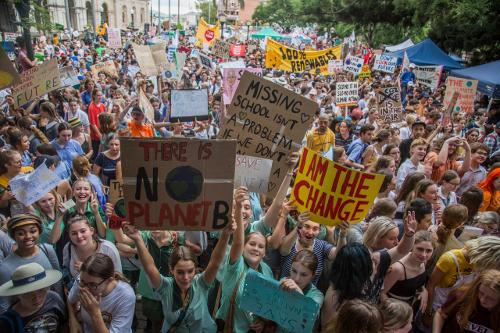 According to the youth-led co-ordinating group, #FridaysForFuture, climate strikes took place throughout the Global South, from Argentina, Chile, Mexico and Peru; to South Africa, Morocco, Uganda and Kenya; to Bangladesh, India, Nepal and Pakistan; to Indonesia, Malaysia, the Philippines and Thailand.

There were also climate strikes in Brazil, China, Iran, Iraq, Japan, Russia and Turkey. 150,000 young people took action in Australia, 10 times as many as struck in November. The largest number of climate strike events took place in France, Germany, Italy, Sweden and the US.

Around 10,000 young people gathered in central London, and thousands more took part in 164 events in other towns and cities throughout the UK, according to a list compiled by #FridaysForFuture. The Scottish councils of Glasgow, Edinburgh, Highland and Fife allowed children to attend the strikes if they had permission from a parent or guardian.

A month earlier, on Friday 15 February, over 10,000 young people in the UK took part in climate school strikes in more than 60 towns and cities.

There was a youth-organised global climate strike in November 2015, but these latest climate strikes were inspired more by Greta Thunberg. The teenager carried out a three-week school strike in August 2018, sitting in front of the Swedish parliament building every day demanding that the government live up to its commitments under the Paris climate change agreement.

Thunberg then began the #FridaysForFuture movement in September, inspiring more and more people in more and more countries to protest every week, including the tens of thousands of Belgian schoolchildren who struck every Thursday in January.

In February, the Belgian general strike against wage controls was joined by climate strikers and the two movements began to support each other. Social justice became part of the demand for climate justice. The Brussels Times reported that the Confederation of Christian Trade Unions and the General Federation of Belgian Labour (GFBL) supported the 15 March climate strike, and the GFBL president, Robert Vertenueil, joined the strike himself.

Climate strike organisers are now considering their next steps. School Strike 4 Climate Australia is planning to pressure politicians to show climate leadership in the federal elections due in May.

See p9 for one possible next step for climate strikers in the UK. More info:
www.fridaysforfuture.org
www.350.org/schoolstrike