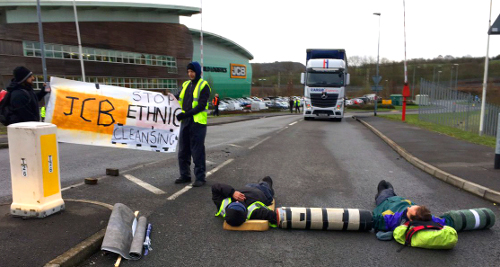 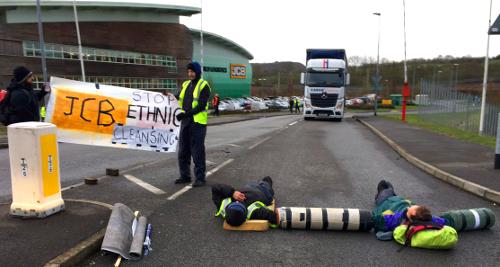 On 7 March, four Palestine solidarity activists were arrested at JCB’s world logistics headquarters in Stoke-on-Trent while lying on the road outside the depot. They had locked-on at 6.30am, joining their arms together in reinforced concrete arm-tubes. (They protected themselves from the rain with waterproof covers.)

The blockade lasted several hours while the company was unable to get deliveries in and out of the depot. JCB manufactures over 300 types of machine, including diggers and tractors. The world logistics warehouse is the central hub for supplier-bought components needed to build JCB machines.

The action was in protest at the Israeli military’s use of JCB bulldozers in the occupied West Bank and East Jerusalem.

According to activist research group Corporate Occupation (CO), Israeli forces used JCB machines to destroy at least 130 of the 460 Palestinian structures that they destroyed in 2018.

Many of these were homes and two were schools.

Critics denounce these actions as a form of collective punishment and point out that destroying property in an occupied territory is prohibited under international law.