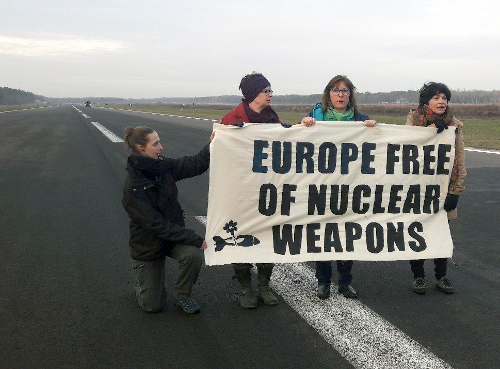 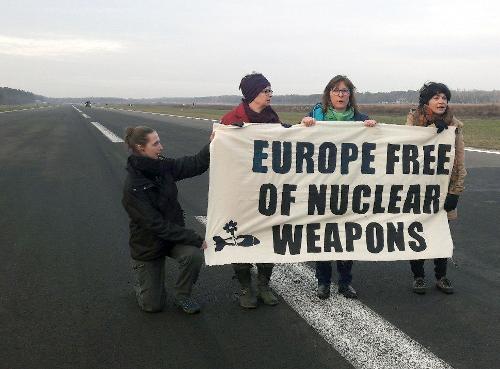 On 20 February, seven peace activists climbed over the fence of the US military base of Kleine Brogel in the north-east of Belgium. Four were activists from Belgium’s Agir Pour La Paix (Act for Peace). Three were Green MEPs (Michèle Rivasi from France, Molly Scott Cato from the UK, and Tilly Metz from Luxembourg).

The seven symbolically blocked the F-16 runway to demand the withdrawal of around 20 US B61 nuclear bombs illegally stationed there.

Another 12 activists, including Green MEP Thomas Waitz from Austria, were arrested demonstrating at the base fence.

Molly Scott Cato, MEP for the South West of England, said: ‘Our action is intended to challenge EU countries to remove US nuclear weapons from European soil. Each B61 bomb is 23 times more powerful than the bomb that devastated Hiroshima. These apocalyptic weapons should find no home in Europe.

‘We demand that Europe’s nuclear nations immediately sign up to the landmark global Treaty on the Prohibition of Nuclear Weapons and begin the process of decommissioning their nuclear arsenals.’