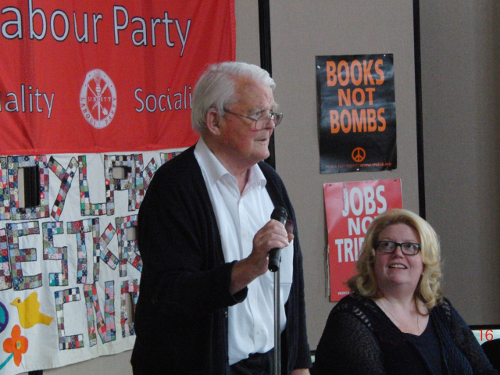 It was a warm and sunny afternoon on 9 June but the church was packed.

The speakers were Paul Davies, standing in to explain current Labour Party policy in the absence of a Labour MP or union official prepared to defend it, and Bruce Kent presenting the opposing view.

It turned out to be an ‘unbalanced’ meeting because there did not seem to be anyone in the large audience who disagreed with getting rid of nuclear weapons. Regrettably, we CND campaigners missed out on this opportunity to learn more about the fears of people who disagree with us and how we might better win them over.

After expressing his appreciation for being invited ‘north of Watford’, Bruce Kent responded to Paul Davies’ speech in support of multilateral nuclear disarmament by stating his difficulties in accepting Paul’s definitions, because of the term ‘multilateralist’.

Bruce said: ‘There’s nothing divisive, that you’ve got to be one or the other. I’m a unilateralist in that I think that every country is capable of taking its own independent steps that help towards disarmament. Everybody can – what the steps are is another matter – but to say that unilateralism is somehow out as a philosophy, it’s nonsense.

“Nuclear weapons – what do they actually do apart from national prestige? What do they do?”’

The arms race had not developed as a result of a series of multilateral agreements. Therefore, Bruce argued, it would only be ended by multilateral, bilateral, regional or unilateral steps forward.

Bruce questioned the unwillingness of both the UK and the United States to be involved in the 2017 Treaty on the Prohibition of Nuclear Weapons, an agreement of 122 countries to nuclear disarmament. ‘Actually the world is... divided into people who think [nuclear weapons] should go and others who think they should stay.’

Here are some more of Bruce’s remarks:

‘Nuclear weapons – what do they actually do apart from national prestige? What do they do?’

‘The other nuclear powers, there are nine of them now, have got what looks like, I think, independent nuclear systems – we don’t. Therefore, we are in a strong position to be the first nuclear state to lead the way to join in the 122 and start talking sensibly.’

On the subject of the extortionate financial cost of Trident, Bruce argued: ‘The National Health Service could be shaken from its roots with £205bn. We could make public transport sensible.’ But also: ‘there’s a moral issue involved in this which we must never, never forget. Trident submarines, if it all goes wrong, can precisely mean this – incinerating large numbers of humanity.’

Bruce expressed his disappointment that we were unable to have in the audience any members of parliament who voted for Trident. It was a view echoed by CND supporters, who complained that elected MPs were unable to defend their position.

Bruce: ‘That’s a pity, maybe they’re all busy, but it would have been good to have had an active debate with those who politically were supporting this affair but they didn’t come. But I hope you’ll find other means of getting this message about – local newsletters, local papers and so on.’

I was transported back in an instant to the passionate, eloquent and inspiring words of Bruce Kent in the 1980s, to the days when we numbered hundreds of thousands of protesters. So much has changed since then – on a personal level, in politics and in the world in general.

I smiled, though, because we need to empower ourselves again….

‘And I think it’s desperately important to remember that attitudes change. When I was about 16, my parents thought it normal for me to have access to the family cigarette box, and I would smoke in front of them watching television at 16.

‘So, all I’m saying is that attitudes to everything, hours of work, votes for women, all these things, anti-slavery, require public pressure at our level to get things changed.’

We need to get nuclear disarmament back on the agenda – in political arenas, in universities, in schools, in public houses, with families, in newspapers, on the television and on the street.

Kate Jones is a member of Wallasey CND.