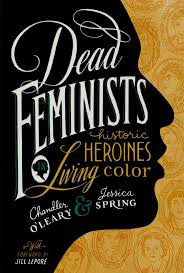 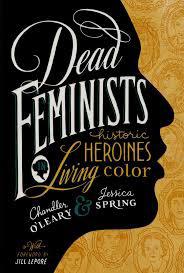 Chandler O’Leary and Jessica Spring didn’t originally intend to call their book Dead Feminists. The title arose as a way to refer to their project in a slightly jokey way, ‘especially as many of the women we’ve profiled have themselves denied being feminists’. However, they wanted to reclaim and own the word ‘feminist’, and decided that the only way to do that was to use it to refer to every single one of the historic and world-changing women profiled in their book.

The book itself is beautifully set out: there are at least three pages of information about each ‘dead feminist’, including pictures. At the end of each profile is a reproduction of a wonderful two-page broadsheet poster, designed to pay tribute to the legacy of that particular woman. Each one consists of a relevant quote from the woman, a short summary of her life and a beautiful backdrop.

Author Virginia Woolf’s poster is made to look like a bookcase; anti-slavery campaigner (and former slave) Harriet Tubman’s is a railway. Somewhat amusingly, the poster commemorating suffragists in Washington state shows a row of brightly coloured jellies, the quote being: ‘Are not our desserts and salads things of beauty and the joy of the moment?’

There are many well-known women included – Emma Goldman, Rachel Carson, Sappho – but the stories behind the less famous names are often equally fascinating. Adina de Zavala devoted her life to protecting historic properties: in particular, the Mission San Antonio de Valero, better known as the Alamo. Rywka Lipszyc – of whom no record survives past her 16th birthday – documented her life in a Jewish ghetto in Nazi-occupied Poland during the Second World War. It’s people like these – people with vivid and inspiring ideas about life, who you never knew existed – that make the book so interesting.

Of course, as with any anthology of women’s lives and stories, the profiles also document disappointments and unfairness. One story that particularly stuck out for me was that of Lili’uokalani, who was the last – and only female – monarch of the kingdom of Hawai’i. After a very short reign, she was deposed by a group of white sugar growers and businessmen – but her story lives on through her music, including one song, ‘Aloha ‘Oe’, which has become a cultural symbol of Hawai’i. Overall, though, reading about the way these amazing women changed the world is very uplifting. Elizabeth Cady Stanton thought she was every bit ‘as good as a boy’; Annie Oakley met her husband when, aged 15, she beat him in a shooting contest. And it was Lili’uokalani who didn’t want to add her husband’s name to the end of hers, claiming that there ‘never was... any such a person as Lili’uokalani Dominis’. Truly, a dead feminist indeed.