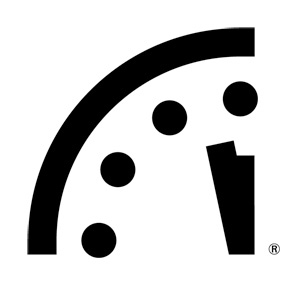 On 25 January, Rachel Bronson, president and CEO of the Bulletin of the Atomic Scientists, announced: ‘Because of the extraordinary danger of the current moment, the Science and Security Board [of the Bulletin] today moves the minute hand of the Doomsday Clock 30 seconds closer to catastrophe. It is now two minutes to midnight – the closest the clock has ever been to Doomsday, and as close as it was in 1953, at the height of the Cold War.’

The central concern of the Doomsday Clock team was the nuclear threat. Bronson wrote: ‘Major nuclear actors are on the cusp of a new arms race, one that will be very expensive and will increase the likelihood of accidents and misperceptions. Across the globe, nuclear weapons are poised to become more rather than less usable because of nations’ investments in their nuclear arsenals.’

The organisers’ message was #RewindtheDoomsdayClock. They recommended, among other things, that the US and North Korean governments ‘should open multiple channels of communication’; and that ‘US citizens should demand, in all legal ways, climate action from their government’.