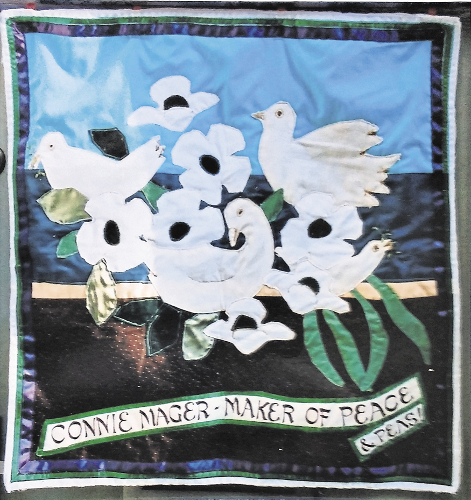 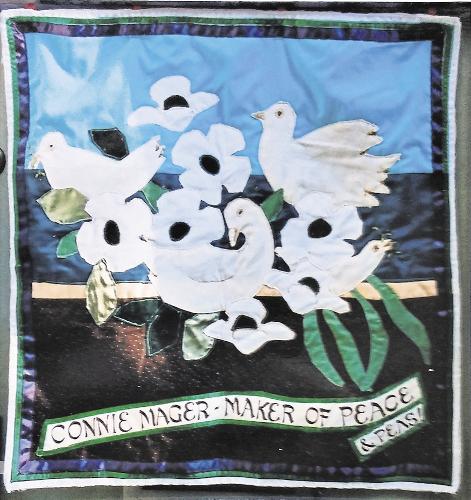 Connie Mager, peace activist, has died aged 97. Born in Lambeth in South London, Connie served in the Women’s Land Army during the Second World War. After the war, she became a teacher of the deaf and moved to Hastings in East Sussex. Connie was a supporter of CND, the Anti-Apartheid Movement, the WEA and the Labour Party. She was active at Greenham Common in the 1980s, taking part in demonstrations and night watches, and she became a founder member, with her husband Basil, of DASH. The ‘Dungeness Action Society of Hastings’ was formed after the nuclear power plant in Chernobyl exploded in 1986, to oppose the two nuclear power stations at Dungeness in Kent.

Connie campaigned, organised, demonstrated and leafleted. She was part of the Snowball campaign, which involved cutting the wire at the power station and arguing her case in court. ‘My conscience will not allow me to support our government in subjecting any people in any part of the world to the threat of annihilation by nuclear war... I do not consider I shall be guilty of a criminal offence in cutting the fence. The government are guilty, as they are in contravention of the genocide act and the Geneva Conventions Act.’

Connie continued to campaign into her 80s. She was active in Hastings Against War and she came to London to walk the entire route of the anti-Iraq War march. She was always an internationalist – positive, energetic and forward-thinking, a very nice human being.
-------------------------------
Connie wrote to the Hastings & St Leonards Observer in 2007:

‘When I was a teenager in 1936, with both my older brothers out of work and my father a poorly-paid tramdriver, the only holiday my parents could afford was to stay with my aunt in Rye. I used to come by bus to Hastings to see The Old Man in the Boat [Biddy the Tubman – ed]. I resolved to come to Hastings when I retired and all my children, grandchildren and great grandchildren love to visit me “at the seaside”, in Hastings and St Leonards.’

‘Re Christopher Hart’s (Good sex, November 27) appraisal of sex in books: as a 79-year-old great-granny I recommend the story of Hari Kumar and Daphne Manners in The Jewel and the Crown, the last two pages of Captain Corelli’s Mandolin, the whole of The God of Small Things and the novels of Barbara Trapido. Surely all Guardian readers already know about Solomon and Shakespeare? Update us!’
connie.jpg