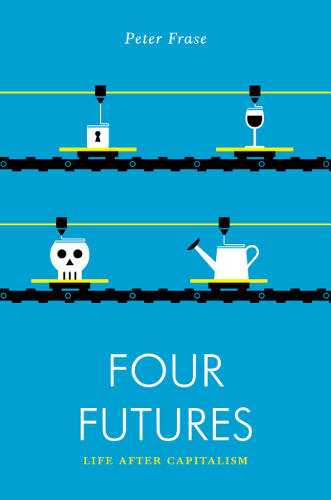 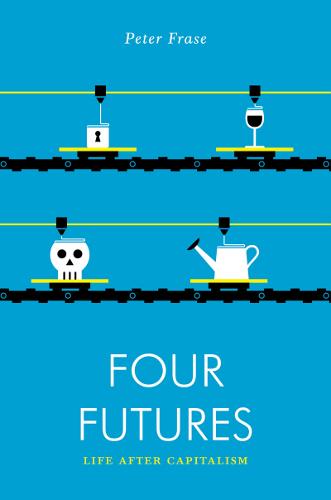 Echoing the opening lines of The Communist Manifesto, Peter Frase opens this book with the claim that ‘two spectres are haunting the Earth’: ecological catastrophe and automation.

The first is a crisis of scarcity – of fresh water (think melting glaciers), fish (think ocean acidification and overfishing), habitable places to live (think rising sea levels and rising temperatures) and so on. The second is a crisis of abundance – the prospect that our technology could soon render most, if not all, human labour superfluous.

While the first of these two crises cannot be denied, the existence of the second is still genuinely debatable.

Some argue that government policy, not automation, is the main cause of unemployment and that a focus on new technologies only serves as a distraction.

While acknowledging these concerns and uncertainties, Frase argues persuasively that it is still worth taking a ‘deliberately hyperbolic’ approach – namely, assuming that all need for human labour in the production process can be eliminated – and using ‘the tools of science in combination with those of speculative fiction’ to explore what might happen.

In the two ‘Abundance’ futures (Communism and Rentism), we address our current ecological crisis and it is ‘possible to use all our robot technology to provide a high standard of living for everyone’. In the two ‘Scarcity’ futures (Socialism and Exterminism), we do not and cannot.

In the two ‘Equality’ futures (Communism and Socialism), we successfully tackle today’s massive inequalities of wealth, income, and political power, while in the two ‘Hierarchy’ futures (Rentism and Exterminism), the rich maintain – and indeed extend – their power.

As well as exploring what each of these four possibilities might involve, Frase also uses each scenario to ‘explore a key theme that is relevant to the world we live in now’.

One theme is the relationship of ‘work’ to a meaningful life – interestingly, research suggests that the unemployed become happier once they retire and stop thinking of themselves as workers.

Two of the scenarios – Rentism and Exterminism – cannot be discussed in polite society, though they have, of course, both been showcased in science fiction’s dystopias.

Rentism, for example – in which the technology needed to produce everything that we need exists but is monopolised by a small elite – is probably not even a thinkable thought for contemporary apologists for capitalism. However, as Frase notes, capitalism is a system of power and ‘having power over others is, for many powerful people, its own reward.’

In this bleak future, protecting the elite from the poor and the powerless could become one of the main sources of employment and (more!) meaningless make-work jobs might need to be invented to keep the system going.

Any sane person would surely want to believe that Frase’s Exterminism scenario – in which he envisages the ruling elite seeking a ‘final solution’ to the great mass of people who have become superfluous to the production process and now only pose a threat – was unthinkable.

However, Frase points to both past precedents (including the fate of America’s indigenous peoples) and current practices (for example, the use of algorithmic methods to identify targets for America’s drone warfare killings) which might suggest otherwise.

Deliberately simplified in order to ‘illustrate fundamental principles’, the four futures nonetheless serve as a useful road map for thinking about current trends.

Drawing on a wide range of sources and topics, both fiction (Kim Stanley Robinson, Elysium, Cory Doctorow) and non-fiction (André Gorz, the Dogecoin digital currency, the LA Express Park parking scheme), this is a thought-provoking contribution to current debates about technology that rightly places the environment and ‘capitalism as a system of class power’ front and centre.