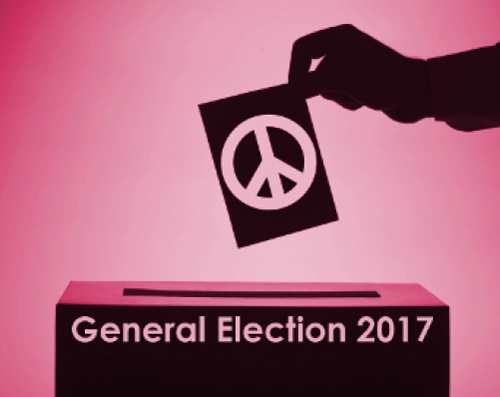 'Vote for nobody’. There is a strong anarchist strain in the nonviolent direct action corner of the peace movement. Part of that anarchist strand abstains from voting, some folk even campaign against voting in elections – to break down illusions about parliamentary democracy. This graffiti used to be on a wall in Guelph, Ontario in Canada – it was painted over several years ago.

On 18 April, the ruling Conservative Party called a snap general election in Britain for 8 June. This is a survey of how some peace groups, and a few other progressive organisations, are reacting to the general election campaign, and seeking to have an impact on the political system.

Pax Christi are also offering their General Election Briefing 2015 – ‘Sadly, little has changed since this was produced. The questions and background will be helpful for today!’ www.tinyurl.com/peacenews2500

CAAT sent out an email on 11 May saying: ‘All parties must listen to the public and pledge to end arms sales to Saudi Arabia.’

According to CAAT, the UK has licensed over £3.3 billion worth of arms to Saudi Arabia since it began bombing Yemen in March 2015, and polling shows that almost two-thirds of UK adults oppose arms sales to Saudi Arabia, with only 11% supporting them.

CAAT pointed to the Labour Party manifesto, which said the party would suspend arms exports to Saudi Arabia pending the results of a ‘comprehensive, independent, UN-led investigation into alleged violations of IHL [international humanitarian law] in Yemen, including air strikes on civilians by the Saudi-led coalition.’

CAAT added: ‘Over recent months the front benches of the Liberal Democrats, Greens, Plaid Cyrmu and SNP have also opposed arms sales to the regime.’

Andrew Smith of CAAT commented: ‘Arms sales and the UK’s long history of support for human rights abusers have not been election issues in the past – primarily because the main parties have pledged to maintain them. This time there is a growing opposition from across the political spectrum.... If politicians want to do what is in the interest of people in Saudi Arabia and Yemen, they must commit to ending the arms sales and the unequivocal political support that has gone with it.’
www.caat.org.uk 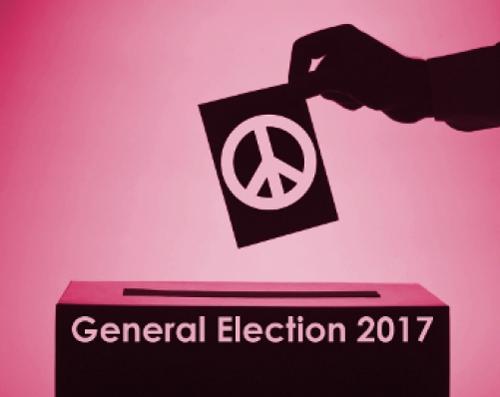 This is the image for CND’s 2017 #VoteOutNukes campaign. GRAPHIC: CND

The Campaign for Nuclear Disarmament says: ‘It is vital that every candidate knows that where they stand on nukes makes a difference to how we vote. We want every candidate to be contacted many times during the campaign. None of them must think that nuclear is just a side-issue.’

Their dedicated election website gives links and guidance on ‘How to #VoteOutNukes in your area’.

CND’s three key issues to ask candidates about (they have a model letter) are: ‘The UK signing the UN nuclear ban treaty’, ‘The replacement of Trident’, and ‘The construction of new nuclear power stations’.

CND says: ‘We will publish the responses as we receive them to help people make an informed decision before casting their ballot.’
www.tinyurl.com/peacenews2501

The British American Security Information Council, a thinktank, published a report on 5 May in partnership with UNA-UK: ‘Meaningful Multilateralism: 30 Nuclear Disarmament Proposals for the Next UK Government’.

Some of the disarmament proposals:

The Quakers’ general election website suggests activities for local Quaker meetings, including holding a hustings for parliamentary candidates to make speeches and answer questions. Another suggestion: ‘Take out a table, two chairs and some cups of tea, and invite passers-by to join you and discuss politics... without suggesting they support any particular party.’

The website also includes two suggestions for activities after the election: ‘Write to your new MP’ (invite them to ‘join you after worship one day to discuss the concerns of your meeting’) and ‘Facilitate a conversation’ in a small group to discuss an important topic. http://election.quaker.org.uk

The National Justice & Peace Network, a network of Catholic peace and social justice groups, doesn’t seem to have produced its own guidance on the election, but is circulating a briefing by Caritas Social Action Network and the Catholic development agency CAFOD.

This includes questions for candidates on these four topics:

The Northern Friends Peace Board has compiled a list of relevant links under a number of headings. Two of the sections are:

Stop the War makes ‘Statements’ every so oftlen, but has not made an official ‘Statement’ about this election. In the advert on its website for the 18 May election question time in London that it co-organised with CND, Stop the War wrote:

‘The questions of foreign policy, war and peace are already a feature in this election and for once there are clear differences between the parties.

‘Labour’s leader, Jeremy Corbyn, is a former chair of Stop the War and a lifelong anti-war campaigner or peace campaigner. This could not be in stronger contrast to Theresa May, whose closeness to Donald Trump makes her support for more wars almost certain. After more than a decade of brutal military interventions, the war party is still refusing to draw rational and humane conclusions from these catastrophes....’

The United Nations Association UK is calling on all political parties to make the following commitments:

As well as the BASIC report it co-sponsored, UNA-UK has also published its own report ‘Keeping Britain Global? Strengthening the UK’s role in the world’.

UK Feminista has a poster-guide to holding a feminist hustings.

Key advice: ‘Remember not to give the impression that you’re pushing for one party’.

Stand Up to Racism

As soon as the election was called, Stand Up To Racism launched a nationwide campaign: ‘We are calling on parties and candidates to refrain from the scapegoating of migrants and refugees and take responsibility for halting the rise of racism, Islamophobia and anti-semitism.’

They asked people to lobby their local candidates to sign the Stand Up to Racism pledge: ‘Following the shocking rise in hate crime after last year’s EU referendum, I pledge in this election campaign to stand up to racism, Islamophobia, antisemitism and the scapegoating of migrants and refugees.’

The Jubilee Debt Campaign has produced a short guide and suggested question for each of their ‘four vital issues’: ‘Please use this guide to ask questions of candidates at hustings events or in writing, or when they come knocking on your door to ask for your vote.’

JDC write: ‘If you do ask a question of your candidates, please take a note of their responses and email it to us so we can follow-up with MPs after the election’:
tim@jubileedebt.org.uk

Here’s one of their topics and questions:

JDC can supply details of husting events and candidate lists on request.

This is part of a statement made by Sisters Uncut, the feminist anti-cuts group, the day after the snap general election was called:

‘Sisters Uncut is non-partisan and revolutionary; that means we don’t give our support to any mainstream political party....But being non-partisan doesn’t mean that Sisters think all political parties are the same or that it doesn’t matter which one is in power.

For many women and non-binary people living in the UK, or seeking refuge here, the political party in power really could mean the difference between life and death.

As anti-capitalist, anti-racist feminists, we are staunchly anti-Tory....

‘Since 2010, at least 34 specialist refuge services have closed due to funding cuts, with 66% of those left open at risk of closure due to financial uncertainty. Those closed were disproportionately specialist services for women of colour.

‘Now’s the time to stand up and be counted sisters – vote against the Tories & other right-wing parties on June 8th, get involved in your local Sisters Uncut group, share your anti-Tory views on social media and talk with friends, family & colleagues about why the Tories are the enemy of the people.

It might be bleak right now, but together we shall overcome.’

Hope not Hate, the anti-racism and anti-extremism group, is campaigning against the UK Independence Party (UKIP): ‘Our general election campaign is using advanced voter analysis tools to keep UKIP out.’

Hope not Hate is also trying to reduce the opportunities for a new post-UKIP party likely to be started by Aaron Banks and Nigel Farage in the autumn.

‘Our 2017 campaign will focus on the seats where UKIP still hopes to poll 15-20% of the vote, with the intention of driving it down further.’ These seats include: Thurrock, Heywood & Middleton, Hartlepool, Dagenham & Rainham, Grimsby, Clacton, Dudley North, Boston & Skegness, Rotherham, Bradford South, and Stoke North.

‘We have the most unbelievable [ed!] data which profiles our key constituencies street by street so we know where to deliver leaflets and we have set up a mail centre so we can produce and send highly targeted and personalised letters.

‘In a new departure in this election, we will run a sophisticated and hyper-targeted Facebook campaign.

‘Our research has long found that working class UKIP voters are economically pessimistic and struggling. And understandably so. The price of food, fuel and energy is going up, while wages are at best stagnating or even falling. And yet UKIP has put banning the burqa at the core of its election campaign.’

The human rights group, Liberty, wants the next government to abandon plans for an Espionage Act that could see journalists and whistleblowers jailed for years if they reveal information that embarrasses ministers.

Liberty also has ‘five questions you should be asking canvassers’. We’ve included detail only on the first one:

Liberty has a print out, cut out and keep ‘questions for canvassers’ doorhanger.

The 38 Degrees online campaigning group created a people-powered/crowd-sourced plan for the 2017 general election within days of it being announced. Hundreds of thousands of 38 Degrees-ers voted in two rounds of surveys.

The final plan has two key priorities – voter support before the election, and a show of strength after the election:

Executive director of 38 Degrees, David Babbs explained that a third option that made it to the top of the list had not been chosen by staff: ‘In the 28th April survey we had also included a draft option around specifically campaigning against UKIP’s new strategy of turning up the volume on an anti-Muslim message.... We were all agreed that UKIP’s new anti-Muslim strategy was a disgrace. But the survey responses showed that whilst a majority supported a campaign, support was much less overwhelming than for the other two options.’ Supporters raised a whole host of possible problems.

The Campaign against Climate Change has drawn up some questions to ask candidates:

‘In the run up to the 2015 General Election a combined £1.3m was spent on targeted Facebook advertising by political parties.... the rise of dark ads has been swift and this trend can be observed globally, perhaps most noticeably in 2016 when the Trump campaign spent tens of millions of dollars funding digital advertising with variable language tweaked to each individual’s particular personality traits.’

‘Who Targets Me’ is a browser-based tool developed for this British general election, to help Facebook users understand how political campaigns are using Facebook to try to influence people. The tool extracts and analyses paid-for political adverts in your Facebook feeds.

The developers say: ‘Analysing the aggregated data will allow us to draw out insights about exactly which demographics are being targeted and the exact media and language that campaigners are using to influence your vote.’

At the time of going to press, the extension only works with Google’s Chrome browser, but the developers promised a Firefox add-on would arrive soon.

You can click the extension icon in the top-right of your browser toolbar to see your personalised statistics.

Best practice for organisations seems to be: