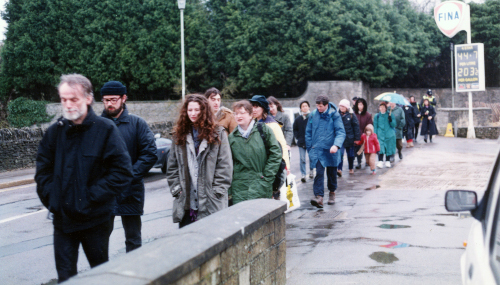 PN's editor recalls his experience of a 'police triple-decker sandwich'

My clearest memory of ‘Andy Davey’, the undercover police officer Andy Coles, is a bizarre moment that I would now describe as a ‘police triple-decker sandwich’.

On 10 February 1991, Christian peace activist Chris Cole and I had broken into the US air force base at Fairford in Gloucestershire to protest against the B-52 raids carried out from the base. (The B-52s were bombing Iraq.)

We had spraypainted a building at the end of the runway with ‘Stop killing civilians’ and ‘US-UK out of the Gulf: US out of Britain’, and were arrested.
Chris and I published the official transcripts of our interviews by police that day as The Rabble Element. The title of the pamphlet came from a 562-word outburst from detective constable Michael J Tankielun as he tried to goad me into incriminating myself.

Here’s a clip: ‘I’m not anti-CND, I think their views are possibly correct.... unfortunately they do have a rabble in them, element, which I think you’re a part of it, but unfortunately give them a bad name.... All you can do is cause damage, oh it’s all right laughing, you laugh, now I’m trying to give you an opportunity to say something, go on, fight back at me, and tell me, prove to me that you’re not a rabble element.’

We launched The Rabble Element at Torriano Meeting House in Kentish Town, London, in May 1991.

At the beginning of the public meeting, we had a go-round of introductions, and a young woman who none of us had seen before introduced herself with a mumble.
We asked her to repeat what she’d said, which turned out to be: ‘My name is Dee, I’m black, I’m a lesbian, and I’m a police officer.’

Dee had come because she’d seen the notice in Time Out and, as a police officer starting out, she wanted to hear the other side of the story. (Emily Johns remembers her admitting that there were rotten apples in the police force.)

We carried on with the readings, which were very enjoyable. I remember Dee saying that she thought we were making it all up until, half-way through, we pulled out the actual transcript documents to read from.

As the meeting broke up, I was surprised to overhear ‘Andy Davey’ engaging Dee in a very high-pressure one-on-one conversation.

An on-duty but undercover police officer was throwing anarchist arguments at an off-duty but out-in-the-open police officer as they both attended a meeting which was all about in-custody police interrogation.