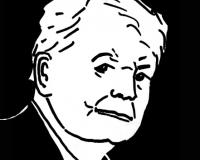 A bit of ecclesiastical direct action, anyone?

Three documents are sitting on my desk right now. Pope Francis’ message for this year’s 1 January World Day of Peace is one of them. The next, a lengthy message from him to the diplomatic corps for 9 January 2017. The last – a merciful mere three pages – is his representative’s message to the Vienna conference reviewing the Nuclear Non-Proliferation Treaty in May 2017.

One thing is quite obvious. Francis has been reading Peace News. It is all there. No to violence, war and nuclear weapons. Yes to peace, nonviolence and human rights.

The distributors must have got Peace News into the papal library somehow.

The assorted diplomats in Vienna were reminded that peacemaking demands the rooting out of those causes of discord which lead to wars. Justice and peace are intimately linked. Migrants and refugees get special mention – ‘a common commitment’ is needed – on offering them a ‘dignified welcome’. Go on, Theresa May, pay attention.

The arms trade gets strong criticism. It is ‘deplorable’ and needs ‘elimination’. Francis describes the present situation as ‘a horrifying world war fought piecemeal….’
Nuclear weapons? ‘I plead for disarmament and for the prohibition and abolition of nuclear weapons: nuclear deterrence and the threat of mutual assured destruction are incapable of grounding an ethic of fraternity and peaceful coexistence….’

His call for positive nonviolent action is powerful. When victims of violence do not retaliate, ‘they become the most credible promoters of nonviolent peacemaking’. Francis is exploring nonviolence at every opportunity now. His World Peace Day message was entitled ‘Nonviolence: a style of politics for peace’, and he cited Gandhi, Abdul Ghaffar Khan, Martin Luther King and Nobel Peace Prize-winner Leymah Gbowee of Liberia as examples of that approach.

Even more interestingly, Francis chose to make a private visit in June to the home towns and graves of two pacifist priests who were ostracised – at times by both church and state. One of them, Lorenzo Milani, was put on trial in 1965 for advocating conscientious objection in a letter to Italian military chaplains. There is much more but this is enough.

Your response like mine is probably ‘three cheers for this pope’. He is not the first one to say such things but probably no previous pope has ever spoken so clearly and powerfully.

But how does this global peace perspective contrast with what goes on at the national church level?

Pope Benedict XV was side-lined by national churches 100 years ago, in August 1917, when he deplored the First World War and issued peace proposals which anticipated a treaty. Have the two major churches in Britain today had much to say – or indeed anything – about the shameful failure of the governments of the nuclear weapons states, including our own, to take any part in current efforts at the UN to secure an international nuclear weapon ban treaty?

When challenged by the media, British Labour party leader Jeremy Corbyn said that he would not ‘press the button’ to fire nuclear weapons.

‘What a wimp’, was the media reaction. ‘Pressing the button’ is of course a nice, cosy phrase meaning ‘being willing to order the launch of weapons which would kill tens of thousands of innocent people elsewhere and pollute the planet for generations’. No church leadership response? This is of course not fair to the Scots churches or to smaller denominations here, especially the Quakers.

The British Catholic Church (despite the tireless efforts of Pax Christi) and the Church of England, at top collective level, are not singing from the same hymn sheet as the pope.

Here comes a practical suggestion. The United Nations, founded in 1945, has a preamble to its charter which says in ringing words that the aim of the UN is to ‘save succeeding generations from the scourge of war....’

The Movement for the Abolition of War has this preamble printed on A4 card. Why not get some (free) from me and pin them up on the notice board of your nearestcathedral and/or parish church?

You may get permission but if not – no matter. A bit of ecclesiastical direct action?