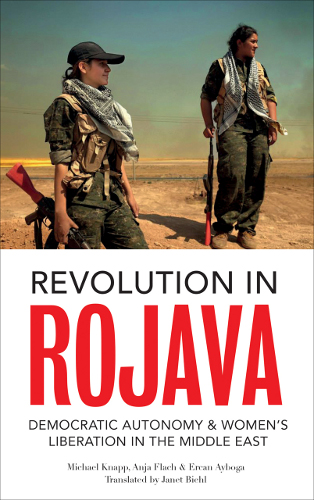 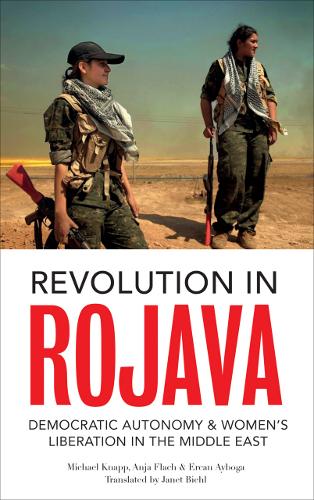 Much has been written about the Syrian uprisings, yet it’s only now with the English translation of this book that a comprehensive and politically-focused look at what’s been happening in the northern area of Syria (commonly known as ‘Rojava’ and part of a larger Kurdistan) has been easily available.

For the last 40 years, the Kurdish liberation struggle has been dominated by the PKK, which until recently was a Marxist-Leninist organisation struggling for a Kurdish nation-state. However, driven by their imprisoned leader Abdullah Öcalan, they’ve changed their ideology as a result of critiquing nationalism and state structures.

This has led to the development of a new approach which no longer aims at setting up a Kurdish nation-state but instead promotes ‘democratic confederalism’. This encourages grassroots organising with an emphasis on ecology, feminism, and the peaceful co-existence of religious and ethnic groups, all without the need for a state.

These are probably all familiar ideas to readers of Peace News, but what becomes clear in this book are the huge differences between the dominant activist culture here in Britain and political activity in Rojava.

While activist politics here is often counter-cultural and youth-dominated, and tends towards short-term ‘fire-fighting’, politics in Rojava is deeply rooted in communities and workplaces, and engages people across generations who have a deep sense of belonging and connection to the area they live and work in.

Political organisations and activities there aren’t based around actions or lobbying, they’re about providing concrete solutions to daily problems and concerns and then defending any gains made, and are guided by an overarching revolutionary ideal. Alongside this is a recognition that for society to change people need to change, and they’re working to make this happen using the tools of education, criticism, and self-criticism.

It’s important not to see Rojava as a concluded utopian ideal or a spontaneous uprising divorced from the long struggle that came before. This book helps to counter the sometimes simplistic accounts that have missed out the detail and complexities of the situation – yet it never strays far from the party line and at times it comes uncomfortably close to portraying Rojava as perfect.

If we’re to learn lessons to help catalyse an effective revolutionary movement here, we need to acknowledge the complexities and imperfections there as well as Rojava’s achievements and resilience.