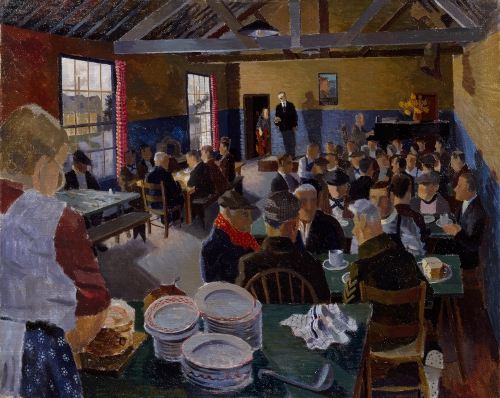 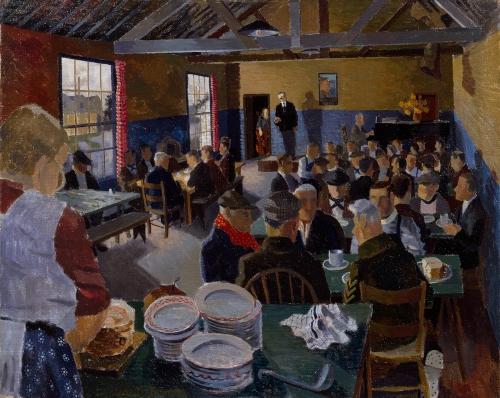 CEMA Canteen Concert,  Isle of Dogs (1941) by Kenneth Rowntree © IWM (Art. IWM ART LD 1879). Artists hired by CEMA (the council for the encouragement of music and the arts) were meant to boost wartime morale but sometimes undermined this mission.

Getting to the (London) Imperial War Museum’s exhibition ‘People Power: Fighting for Peace’ involves crossing the huge atrium of the museum, hung with fighter aircraft and missiles. To say it feels incongruous is a bit of an understatement. It also feels odd that you can look at all this militaria for free, but if you want to learn about the people who oppose militarism, you have to pay £10 for the privilege.

Nonetheless, if you feel like paying up, there’s plenty to enjoy in this exhibition. I particularly liked the artefacts which brought the history of the peace movement to life.

Original sketches by Gerald Holtom (1958). University of Bradford © The Commonweal Trustees. PN staff played a key role in encouraging Holtom not to give up on the idea.

You can read about all this stuff on Wikipedia, but it makes it much more human when you actually see a white feather that was sent to a First World War conscientious objector. Attached to the feather was a piece of paper with these words: ‘Dear Sir, If you are too proud or FRIGHTENED to FIGHT wear this.’ (Shouting in block capitals is not simply a modern preoccupation.)

Likewise the letter sent in an unstamped envelope (so the recipient would have to pay the postage) to the Aldermaston march committee: ‘I am a doctor and I believe a Christian but so strongly do I disapprove of your actions that I am sending this in the hope that it will deplete your funds by 6d’.

This perfectly illustrated the controversy over the marches to and then from the Aldermaston nuclear bomb factory – and, I would add, the importance of archiving; whoever thought to keep that letter and envelope?

The exhibition starts with the First World War, moves through the Second World War and the anti-nuclear movement of the ’50s and ’60s, stops off at Greenham, and ends up at the huge march against the Iraq war in February 2003.

Exhibits are well laid out, with lots of archive film footage, artwork, and sound recordings of peace activists (some of them still active), their stories alternately fascinating, horrifying and funny.

And yet, there was also something missing.

Any exhibition is necessarily selective but how it turns out depends entirely on who is doing the selecting. This felt very much like an exhibition put together by an academic whose knowledge of the peace movement of recent years came from the mainstream press.

I was amazed to find out that the curators had not contacted Peace News for their input or use of their extensive archives – even though a caption on archive film footage of a Porton Down march notes that a protester is holding a copy of PN. (Porton Down is a 101-year-old chemical and biological warfare research station in Wiltshire.)

Consequently, the exhibition focuses heavily on the higher-profile campaigns while largely ignoring the real heart of the peace movement: people plugging away, year after year, on small campaigns and creative acts of resistance to the dominant narrative of warmongering.

Furthermore, if one didn’t know better (and probably most visitors don’t), one could reach the conclusion that the peace movement was essentially dormant between the end of large-scale protests at Greenham in the late ’80s and the protests against the Iraq war in 2003.

The huge opposition to the 1991 Gulf War and to ongoing British interventionism in the Middle East is ignored, as are the long years of protest against the arms trade. Decades of opposition to Trident are represented by five placards stuck randomly on the wall at the end. Although the huge march against the Iraq war is well documented, there’s precious little sign of any of the other activism that was going on at the time.

The exhibition ends with a long series of interviews with people including Lindsey German, Kate Hudson, Mark Rylance and the artist David Gentleman. While they make some interesting points, all the interviewees are white and hardly in the first flush of youth.

It would have been so much better with more diverse voices, particularly younger people. It would be a terrible shame if people were to leave this well-intentioned exhibition with the impression that the peace movement will be finished in 20 years or so as everyone in it will be dead.

Andrea Needham is the author of The Hammer Blow: How 10 Women Disarmed a Warplane, published by Peace News, and shortlisted for this year’s Bread and Roses Award for Radical Publishing.