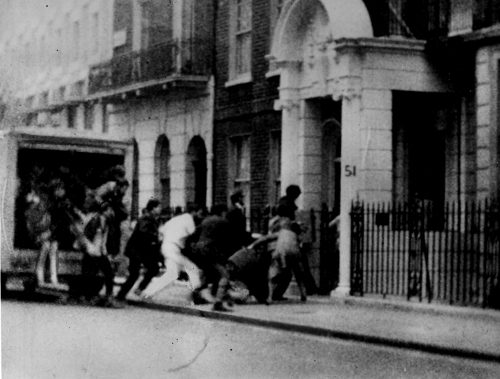 50 years after the colonels’ coup in Greece

01 Jun 2017 Feature by Diana Shelley
50 demonstrators run into the Greek embassy, 21 April 1967. Still from a film shot by Nic Ralph on the night. PHOTO: NIC RALPH

On 21 April 1967, as forthcoming elections in Greece seemed likely to elect a centre-left government, a group of right-wing colonels staged a coup. Tanks rolled into Athens, thousands of leftists were imprisoned without trial and, with the collaboration of king Constantine, the colonels’ junta established military law, abolished the constitution and cancelled the elections. People were tortured, people were killed. Even the music of left-wingers, including Theodorakis, was banned and shopkeepers jailed for selling their records.

In London, a week after the coup, a removal van pulled up outside the Greek embassy in Mayfair. Four people, two carrying daffodils, knocked; the door opened. From the back of the van, 50 demonstrators jumped out and ran inside.

We were mainly supporters of the Committee of 100, the nonviolent direct action peace organisation, or students at the London School of Economics. Some of us had been involved with the Greek peace movement, travelling to Greece to support demonstrations and organising protests in London against the Greek queen Frederika’s visit in 1963; three occupiers worked at Peace News.

We spread through the building, careful not to damage anything. The police arrived 40 minutes later. A speaker, broadcasting news of the occupation from a window, ended: ‘The police are now breaking into this room. We will have to stop broadcasting. Save democracy in Greece!’

We were arrested and carried into police vans without resisting. People from one van escaped when they saw the door was unlocked and no officer in the back.

42 people were charged with ‘affray’ and ‘threatening behaviour’, and Terry Chandler with assaulting a policeman. A month later, more serious charges were substituted: ‘riotous assembly’ and ‘forcible entry’, the latter dropped at committal proceedings along with all charges against one defendant who had been outside, not inside, the embassy.

At the Old Bailey that October, we were faced with a plea bargain and, after much argument, agreed we would all plead guilty to unlawful assembly – like riot but without the violence – in order that ‘conspiracy to trespass’ and Terry’s alleged assault would be dropped.

Despite everyone pleading guilty to unlawful assembly, and without any evidence, justice Widgery picked ‘ringleaders’ on the basis of their previous convictions: Terry got 15 months, Michael Randle 12, and Del Foley six. Twelve of us were fined and the rest conditionally discharged.

The occupation demonstrated opposition to the coup on the very day the Labour government shamefully recognised the colonels’ regime. In Greece, political prisoners and others heard about our action and took heart from this act of international solidarity. But it took another seven years of suffering and resistance before the fascist junta collapsed and democracy was finally restored in Greece in December 1974.

This 28 April, the Greece Solidarity Committee in London celebrated the overthrow of the junta, and kindly offered us a free room for a 50th anniversary reunion at Unite the union’s head office. Not everyone could come. Some couldn’t be traced and, sadly, of course, several have died in the intervening years. But more than 20 occupiers and supporters gathered to share memories, with messages from some of those prevented from coming by distance or ill-health.

Afterwards, we joined the main celebration with food, speakers and music.

Michael Randle spoke about why we occupied. Two Greek comrades had travelled to be with us: Gella Varnava-Skoura described what our occupation meant in Greece while Maria Styllou gave an update on more recent events.

At a time when the Greek people are again suffering so much from the extreme austerity measures demanded by EU policy, and fascists are elected to the Greek parliament, we were reminded of the importance of international solidarity.