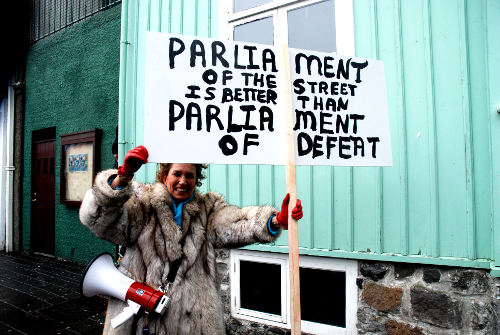 How the Scandinavians got it right – and how we can, too 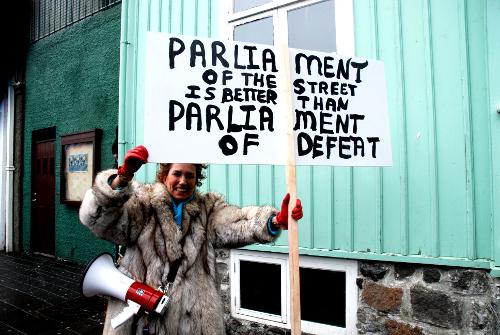 When the Icelanders heard that their leader socked away money in an off-shore account in the Virgin Islands, 10,000 of them packed Parliament Square in Reykjavik on 4 April to demand his resignation. That’s partly because prime minister Sigmundur Davíð Gunnlaugsson had been urging his people for years to show their faith in their country by keeping their money at home. The surge into the streets also represented the Icelanders’ view that they needed to use nonviolent direct action to maximise their power.

I drank coffee on Parliament Square a few years ago with the leader of the Icelanders’ uprising of 2008-2009. I interviewed Hørdur Torfason for my forthcoming book, Viking Economics (Melville House, published in July). Hørdur suggested we meet at his favorite café, which faces where the action took place. The nonviolent campaign he led drove out not only the prime minister but the government itself, and put bankers in jail.

Back then the campaign was called ‘the Pots and Pans Revolution’ because people escalated by banging on kitchen utensils so loudly that parliamentarians couldn’t hear each other inside the building. That action was not a one-off protest; it was part of a sustained campaign. Hørdur gave me a blow-by-blow account, which I relay in the book.

The stakes in 2008 were far greater than individual corruption. Iceland’s was the first modern economy in which virtually the entire banking sector went belly-up, and, making it worse, the currency collapsed. Unemployment and inflation shot up. Many Icelanders, encouraged by the economic bubble presided over by their government and banks, had spent their savings and had nothing to live on. Because the government had lowered taxes on the rich, another mistake frequently made by neoliberals, Iceland had no ‘rainy day fund’ for contingencies. Some in the Western mass media described Iceland as a failed state.

In my book, I share Hørder’s exciting narrative of how Icelanders forced out their government and put bankers in jail, but their people power was just as significant in the follow-up negotiations with the international monetary fund (IMF). Icelanders couldn’t even withdraw their money from cashpoint machines, much less pay their mortgages. Yes, the tiny country (population 320,000) simply had to get bailed out, but Icelanders’ new government was a coalition of social democrats and green socialists who refused to accept from the IMF the usual neoliberal prescription of austerity.

Negotiations were intense, but because the new coalition was backed by ordinary Icelanders’ intense nonviolent campaign, the government could negotiate with the IMF a deal unheard of anywhere else in the world.

Iceland then implemented a leftist economic strategy and the country made a dramatic recovery. Nobel prize-winning economist Paul Krugman contrasted Iceland’s approach with that of the UK, US, and most European countries after 2008: ‘Where everyone else bailed out the bankers and made the public pay the price, Iceland let the banks go bust and actually expanded its social safety net.’

In the current moment, we don’t know if Icelanders will deal with their corruption by waging a direct action campaign, or content themselves with a one-off event that ousts the prime minister. I was told by Thorvaldur Gylfason, a leading Icelandic economist, that his country has historically been more plagued by corruption than its squeaky clean Viking cousins.

Already in Iceland’s current crisis, however, we know enough to see the impact of three percent of a population willing to engage in nonviolent direct action. If in Britain two million people – ‘the 3%’ – took similar action, the country could resume its earlier progressive journey toward the kind of society it deserves.

Part of the challenge for Britain, as in the US, is putting much too much hope in the electoral process. If Icelanders had been resting their hopes on ‘the next election,’ they too would wait in vain. Their understanding of power is not unusual among the Nordics.

“Because the government was backed by ordinary Icelanders’ intense nonviolent campaign, it could negotiate with the IMF a deal unheard of anywhere else in the world”

Through research I discovered a vivid legacy of Nordic people power and then understood how those countries achieved shared prosperity and greater equality. Earlier, I’d bought typical efforts to account for the Nordics by reference to their homogeneity, or smallness, or having been historically well-off, of having unusually abundant resources. Actually, history shows any number of countries that are small, or homogeneous, or resource-rich, and nevertheless experience mass poverty, injustice and tyranny.

In fact, only a century ago a majority of Icelanders, Norwegians and Swedes were poor. For decades, desperate Norwegians and Swedes were fleeing their countries, seeking a chance to earn a living. Those who remained at home decided to roll up their sleeves, supplement their inadequate electoral systems with nonviolent campaigns, and push the 1% out of dominance. The Swedes and Norwegians did that in the 1930s. At that point they became free to abolish poverty, increase individual freedom, and build a prosperous economy for all.

One pay-off for the Danish people of their 1920s legacy of direct action showed up in the 1980s and ’90s. They, like the Brits and Americans of the period, experienced a push-back by a 1% that was not amused by the progressive period of the 1960s and ’70s. For one thing, in the ’70s the Danish and US nonviolent anti-nuclear power movements checkmated nuclear power. Clearly it was time in multiple countries to resume what billionaire Warren Buffett called the ‘class war’.

Inspired by Thatcherism, Danish conservatives tried in the mid-1980s to tighten the screws on the working class, and that’s where direct action came in. Danish leadership, having observed both the British and US labour movements go on the defensive in the early 1980s, decided to take the offensive. They organised a large and extended multi-industry strike in 1986–87 that largely prevented the conservatives from implementing a neoliberal programme.

Their Norwegian and Swedish cousins could have benefitted at that time from the example of Danish feistiness. A ferry-ride away, the 1% in Norway and Sweden persuaded governments to deregulate the banks, freeing the bankers to go wild and lead both countries to the economic cliff. Fortunately, the left re-asserted its good sense, seized the leading banks, fired the senior management, prevented the shareholders from getting a krone, and re-organised the financial sector in alignment with social democratic principles. A decade later, when 2008 found financial giants like the UK and the US tottering in a new banker-led disaster, the Danish, Norwegian and Swedish banks were clean and tidy.

No surprise for Dr King

Martin Luther King Jr famously told his people: ‘Freedom is not free’. He knew that costly struggle is required to achieve justice, and he would not be surprised by what I discovered in my research about the essential role of direct action in the countries that have achieved the highest degree of justice, equality and individual freedom on the planet.

When the Nordics were poor and oppressed, they did have free elections and intact parliamentary institutions – and also rule by the 1%. Recently I learned from the famous Princeton study, called by the BBC the ‘oligarchy study’, that the US situation is similar to that of the Nordics a century ago: democratic pretence and 1% rule. It appears to me that in Britain the same is true; even when Labour is ‘in power’, the oligarchy is in charge. The descendants of the Vikings showed that pushing the economic elite out of dominance is not rocket science; it’s a matter of leading mass discontent into strategic nonviolent struggle.

Part of leadership is offering a convincing vision of a practical alternative. My research shows an alternative with a successful track record of over half a century, right across the North Sea. As much as my radical inclinations itch to go farther than the Nordics have done, it seems high time for the Anglo world to go at least that far. Their achievement, which consistently puts them on the international ratings substantially higher than the UK and much, much higher than the US, is an achievement more likely to be emulated when understood. And that’s a goal we can do something about.

This is an adaptation by George Lakey of his article on the online blog WagingNonviolence.org, first published on 7 April. The ‘oligarchy’ study was carried out by Princeton University professor Martin Gilens and Northwestern University professor Benjamin I Page (published in September 2014). George Lakey is the author of several books, including Toward a Living Revolution (Peace News Press, 2012) and now Viking Economics: How the Scandinavians got it right – and how we can, too (Melville House, July 2016).