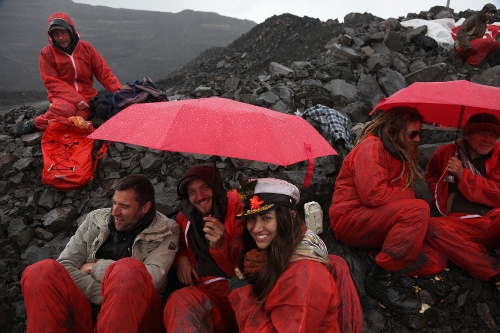 In early May, the Reclaim the Power (RtP) network organised ‘End Coal Now!’, a protest camp and occupation of the 11-million-tonne Ffos-y-Frân opencast coalmine near Merthyr Tydfil in south Wales. An early appraisal of this action could yield valuable lessons for social movements taking action this year and beyond.

End Coal Now! was followed by the occupation of a lignite coalmine in Welzow in Germany: ‘Ende Gelände’, roughly translated as ‘here and no further’. These are some of many actions planned for 2016 as part of the Groundswell call for climate justice which came out of the protests at the COP21 climate talks in Paris last December. Worldwide, actions are planned on a variety of issues, from fossil fuels through financial markets to border controls. The aim of Groundswell is to help groups taking action to support each other, creating new possibilities for people to engage in direct action.

On many fronts ‘End Coal Now’ was a success that will resound empoweringly through the climate justice movement in future actions.

Dressed in red boiler suits, more than 300 people drew a line through Ffos-y-Frân to symbolise the fact that viable life on the planet is threatened by carbon emissions.

Breathing smoke, a Welsh dragon led the line in which appeared giant silver and red inflatable cobblestones. These cobblestones have become the non-trade mark of climate justice action after they appeared in Paris last year. Ffos-y-Frân was closed for 12 hours by singing, drumming, dancing, clowning and football-playing protesters. Finally, the occupation ended voluntarily with no major injuries and no arrests.

The media coverage of the mass trespass exceeded RtP’s expectations. The story broke in the Ceredigion Herald a few days before the camp. The action was then lead item on TV news in Wales for three days. It made the Guardian, the Western Mail, The Times and the Daily Mail. And social media was all over the story, with Twitter going through the roof. Taking place just a couple of days before Welsh elections, it was remarkable that the action attracted so much attention from a media which typically features the same-old-same-old people, places and issues. So, what can we learn from RtP?

End Coal Now! didn’t just happen, it was a huge organisational feat involving a wide network of contacts. It required a number of national gatherings at various locations in advance of the camp and extensive use of communication technology for working groups to stay in touch.

On a frostbitten, wind-swept mountain-top common it all came together. Some 300 people lived well and functioned with an assured collective efficiency for four days. There were marquees for a full programme of meetings, presentations and workshops, clean drinking water and piping-hot gourmet vegan food three times a day. The camp generated all the energy it needed via a wind turbine and photovoltaic array. And the compost toilets were a joy to use, though a good-natured queue very early in the morning on the day of mass trespass surely wished there were more of them!

Key to it all coming together at the camp was RtP’s horizontal organisation and participatory democratic process.

Done badly, consensus can be alienating for newcomers, but RtP do it very well, integrating all participants with clarity and humour. Familiar to many social movements globally, consensus decision-making remains poorly understood and ill-appreciated by more traditional political organisers.

Staging the mass trespass a couple of days before Welsh elections undoubtedly attracted media attention. However, the action may actually have been too near elections on 5 May to highlight opencast mining and climate change as major election issues.

Only the Green party found time to actively support RtP’s occupation. Wales’ leader Alice Hooker-Stroud visited the camp with the outgoing England-and-Wales leader Natalie Bennett. Sadly for them, the Green party did not win a single seat in Wales. Some environmental NGOs also did not support the camp. By contrast, the network Frack Free Wales attended the camp and participated fully.

Even though Plaid Cymru, the Greens and the Liberal Democrats were already onside, RtP made the effort to contact all election candidates to elicit their support. Given the overall predictability of politics in Wales, the strategic target should probably have been Welsh Labour who were assured of being in government.

Welsh Labour are an environmental dinosaur, sympathetic to opencast coalmining and supporting the noxious coal-fired Aberthaw power station to the tune of £27 million in public subsidy.

Welsh Labour have little conception of moving to a green economy. Apart from the Tories and climate-change-denying UKIP, Labour’s manifesto was the least environmentally progressive.

RtP formed an alliance with the United Valleys Action Group (UVAG) which opposes opencast mining across south Wales on the grounds of visual, noise and dust pollution.

The alliance meant that the action consensus for the mass trespass took into account UVAG’s concerns.

A commitment not to damage machinery was made so as not to negatively impact on UVAG’s fight on other fronts, particularly in the courts.

Before Climate Camp Cymru in 2009, an outreach programme ran gatherings all across Wales for a year in advance of the action. The result was a mobilisation of 500 people at the first protest camp at Ffos-y-Frân. In 2016, the RtP camp attracted only 300 people at a time of increasing environmental protest. In part, this is explained by RtP not having the time to undertake an extensive outreach programme.

Although workers’ protests are also on the rise, the lack of solidarity between labour and environmental movements continues to disappoint.

Workers who spoke with protesters at Ffos-y-Frân certainly seemed sympathetic to the environmental arguments and were critical of government for not promoting green jobs. Are these workers a step ahead of their union, Unite, which continues to support opencast coal? What could convince labour unions to fully commit to climate justice?

By the time I’ve written this far, the actions at Ende Gelände have blockaded a coal railway and entered the ‘Schwarze Pumpe’ power plant. 3,500 people participated in the mass action and the mine was shut down for almost 60 hours. RtP social media noted that ‘Each successful action in the Groundswell chain clearly increases confidence’.

Although there is much more to learn, herein we’ve noted the benefits of disciplined horizontal organising, fostering local alliances and having a media strategy. Recent research indicates that direct action is the most effective form of protest. However, all forms continue to play a part in campaigns.

If protests are to be noticed, there is a demand to make them ever-more creative and spectacular. From the experience of End Coal Now! we observe the need for a pragmatic strategy to engage mainstream politics. Alliances with labour unions also seem vital to environmentalist struggles in the long term. And to ensure mass mobilisation, time and resources have to be dedicated to outreach at grassroots level.

Kelvin Mason is one of the editors of the PN Wales Page, and was an End Coal Now! organiser. For more on that research on direct action: https://theconversation.com/hard-evidence-this-is-the-age-of-dissent-and-theres-much-more-to-come-52871

Reclaim the Power and Groundswell: www.reclaimthepower.org.uk