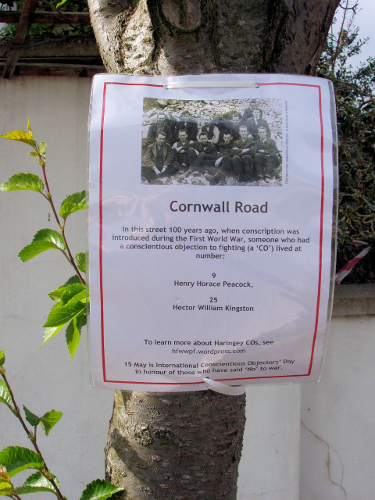 In mid-May, peace activists put up signs in 100 streets across the London borough of Haringey in recognition of men who lived there 100 years ago who were conscientious objectors to the First World War.

This was an initiative of the Haringey First World War Peace Forum, local residents who have researched the stories of nearly 350 conscientious objectors in Haringey – which at that time was three boroughs of Hornsey, Wood Green and Tottenham.

Why were the numbers particularly high in this part of north London? One factor may have been the North London Herald League, based in Green Lanes, Haringey, which was a network for political activism, supporting industrial strikes, suffragettes, and opposition to the war.

The league held regular open-air meetings and rallies in nearby Finsbury Park.

------------------------------------
On International CO Day on 15 May, events were held around the world, including in Venezuela by 43 men who declared in public they would resist conscription; in South Korea by a mass cycle ride calling for the release of 700 imprisoned COs; and in at least 10 town and cities in the UK, including Sheffield, Manchester, London and Edinburgh. In Penzance, councillors blocked the planting of a memorial peace tree for COs in a war memorial park. In Leicester and Carlisle, new memorials to COs were unveiled. – PN staff

To read the biographies of Haringey COs: www.hfwwpf.wordpress.com