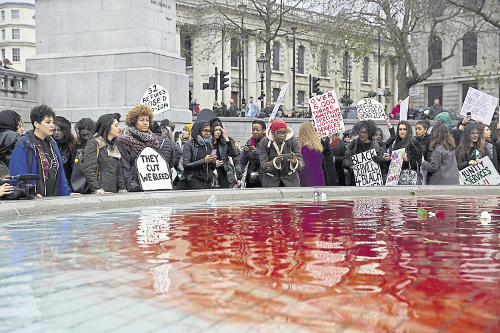 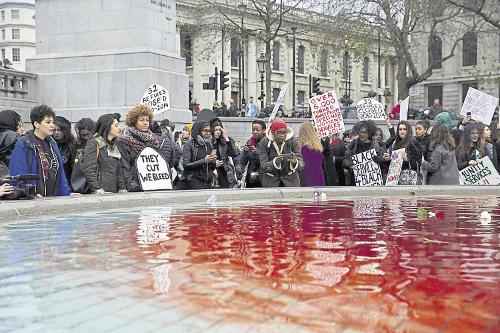 Sisters Uncut. It’s likely that if you follow the anti-austerity movement, you’ve heard of them. They are the feminists who dyed the fountains in London’s Trafalgar Square blood red in response to chancellor George Osborne’s announcement in his autumn statement last year, on the International Day for the Elimination of Violence against Women, that he would be slashing the local authority budgets which fund services for women experiencing domestic violence.

They also pre-empted his most recent budget announcement on 16 March, by using a fence to blockade the entrance to the treasury, symbolising their demand that funding for domestic violence services should be ring-fenced at a national level.

Most famously, they stormed the red carpet at the premiere of the film Suffragette, chanting that dead women can’t vote. Their aim was to raise awareness of the shocking fact that two women a week are murdered by their current or former partners in England and Wales, while these cuts take place.

But Sisters Uncut held their first demonstration over a year ago – a Valentine’s Day roadblock of Oxford Circus, also in London. The activists who organised that demonstration, many of whom work with women experiencing domestic violence, had originally thought it would be a one-off.

Lucile, one of these ‘founding sisters’, told me that they held a public meeting and invited ‘anyone who wanted to do something to draw attention to what we saw as the decimation of our sector’. Some 40 women turned up to that meeting and the movement unleashed there hasn’t stopped growing. Indeed, there are now three branches of Sisters Uncut within London, and further regional branches have sprung up in Portsmouth, Doncaster, Bristol and Glasgow. Apparently there is both a need and an appetite for the work Sisters Uncut do.

At a Sisters Uncut fundraising event celebrating this year of growth, I ask Lucile whether she thinks it is sustainable. She tells me that violence against women has always been a strong focal point for uniting feminists. After all, a feminist who does not condemn violence against women is no feminist at all. But Sisters Uncut also insist on their ‘intersectional approach’, meaning that in all they do, they recognise the ways in which race, class, (dis)ability, sexual orientation, immigration status and gender identity will affect a given woman’s experience of violence, her ability to leave a violent relationship, and the kind of services she needs in order to safely do so.

Some of the placards on display around us bear slogans like ‘Black Services for Black Women’, or ‘Black Services Matter’, referring to the fact that specialist services for black, asian and minority ethnic women have been hardest hit under austerity. That this intersectional approach won’t be maintained as the movement grows has been one area of concern for the sisters.

Another is that London will dominate over the other regions. Before branching off in three directions, the London group also came to an explicitly pro-decriminalisation stance on sex work, an issue which has traditionally proved divisive for feminists. One sister I spoke to admitted that she was not wholly comfortable with that stance, but stressed that she would maintain her support for Sisters Uncut ‘because I know women who wouldn’t still be here without the services they’re trying to save’.

As Sisters Uncut like to remind the public, one in three women in the UK will experience domestic violence, rising to one in two disabled women, therefore it’s likely everyone knows someone who has been affected, if they have not been affected themselves. This makes it a visceral issue and that is likely to keep driving the sisters, through thick and thin.

Another factor which seems to be on their side is that Sisters Uncut provides a rare space for organising as women-only – or without men, as it might more accurately be put. Since that first meeting, to which only women turned up, Sisters Uncut have developed the gender inclusion policy that they are open to ‘all women – trans, intersex, and cis – all who experience oppression as women, including gender-nonconforming and non-binary people, and all those who identify as women for the purpose of political organising’.

Another sister I spoke to, Brenda, claims that this definitely makes things ‘easier’ – ‘men just bring a lot of dominating behaviour and don’t really “get it” on this issue’. She believes many women have come to Sisters Uncut feeling disenchanted with what she calls the ‘male left’.

I speculate that if sisters are joining the movement from the broader left, they may view the cause of saving domestic violence services as a ‘thin end of the wedge’ in a broader leftist struggle. Indeed, Sisters Uncut are also a regular presence at demonstrations for a plethora of causes, most notably the campaign to shut down Yarls Wood, the notorious women’s immigration detention centre. But Brenda insists that this issue is fundamentally intertwined with that of domestic violence. I press her on why, and she explains ‘at Yarls Wood, the state is basically acting in loco abuser. G4S [the private company which runs Yarls Wood], is also profiting from that. And because of the localism act which the last government passed, G4S could actually bid for contracts on domestic violence services, which local authorities are just giving to the cheapest provider these days’.

The localism act requires local authorities to act like businesses, ‘minimising their expenditure’, and it is the control of local authorities over domestic violence services which accounts for Sisters Uncut’s decision to focus their energies on organising in local communities. But they also insist that the chancellor will not be let off the hook. On budget day, London was plastered with George Osborne ‘wanted’ posters, accusing him of ‘destroying women’s services’.

“The state is basically acting in loco abuser”

As Brenda puts it, ‘he always makes a token gesture towards us, which means we’re doing something right. In the autumn statement, it was the tampon tax thing, which was just an insult [Osborne pledged that money raised from the luxury tax on sanitary products would be “donated” to women’s charities], and this time he brought that up again. But it’s not enough. In the last government, he cut funding for domestic violence services by 30 percent. That needs to restored and ring-fenced at a national level. For specialist providers’, she adds, ‘not the cheapest provider’.

Speaking to Sisters Uncut, I found myself wishing that the official opposition could have as sharp an analysis and as accessible an anti-austerity narrative. The sisters are undoubtedly some of the more media-savvy activists to have emerged in the fight against austerity. Few stunts could be more memorable than theirs. But there is also a depth behind that glossy media image of diverse young women, often to be seen dancing in the streets, setting off colourful smoke flares, or silently laying flowers for their sisters who have not survived.

In the wake of another austerity budget, the rest of the anti-austerity movement has a lot to learn from them.