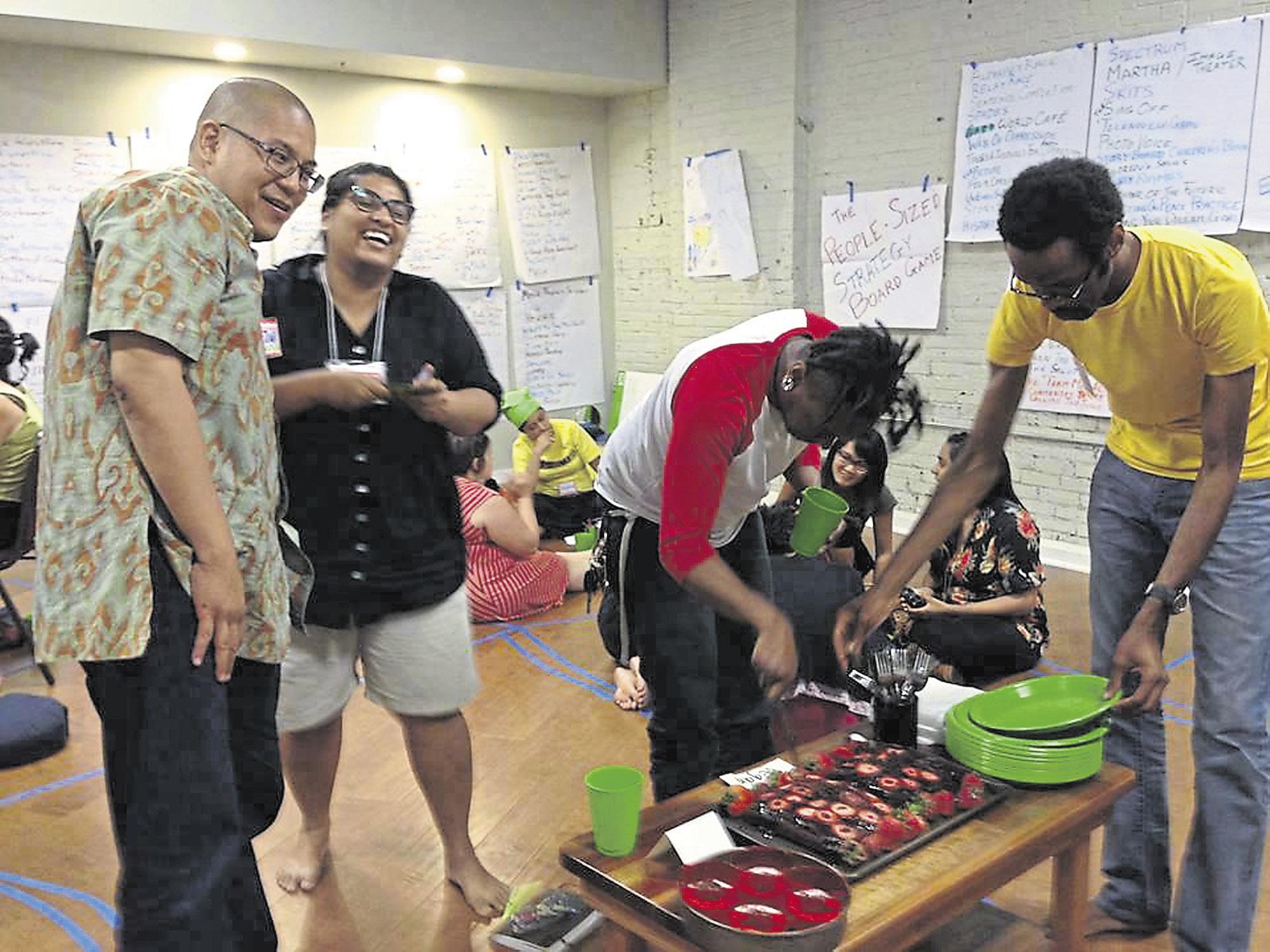 Let’s put two things next to each other. On the one hand, Peace News is committed to nonviolent revolution, to the nonviolent transformation of society including the replacement of capitalism by participatory democracy in the workplace and the reorganisation of the economy to serve human needs rather than human greed.

That means building much more powerful movements for change, movements that aren’t satisfied with just stopping this war or cancelling that weapon, or closing down this power station or halting that airport expansion project, however important those immediate goals are.

On the other hand, over the past few years, PN has put a lot of effort into training and facilitation for activists. The story starts in July 2012 with ‘Dealing with Power’, the weekend anti-oppression training of trainers that PN organised and George Lakey ran in Manchester. Its latest chapter is the 10-day training of activist trainers organised and underwritten by PN (in partnership with Turning the Tide and Campaign Bootcamp) that Erika Thorne and Nico Amador are leading in London this April.

All three trainers are part of Training for Change (TfC) based in Philadelphia, which has an approach to training it calls ‘direct education’.

What is the connection between the large-scale revolutionary ambitions and commitments, and the micro development of dozens of activist trainers and facilitators?

Putting it another way, how can PN justify all the time and energy it has put into supporting the development of activist training? Support which includes the multi-issue interview we ran with Betsy Leondar-Wright exploring her work on activist class cultures.

Isn’t activist training just middle-class navel-gazing, a way of distracting yourself from the real work of getting together with other people to stop bad stuff from happening? Being middle-class, I’m aware of the dangers.

Immediately after that conversation, Nikki led a group song, and I told the group about an insight I’d had about myself, neatly illustrating (without being aware of it) the theory Nikki had just shared with me.

Movements are made out of groups. It’s groups that take action and exert pressure, and build alternatives and make change. The more skillful and confident groups are, the more powerful are the movements that can make change.

In my experience, direct education is a thrilling route to that kind of activist training.

While other forms of training pay lip service to ‘getting the group to pool its knowledge’, direct education has a rigorous commitment to trainers not lecturing, but supporting groups to uncover their own wisdom, to find out that, collectively, they already know a lot of what they need to know to do the work they need to do.

Let’s get more concrete about the value of training. Right now, the movement against Trident replacement is seriously weakened because of the opposition of thousands of skilled working-class people whose jobs would be at risk if the government cancelled the building of new submarines.

Their opposition means two of the biggest unions in the country, the GMB and Unite, have opposed disarmament, with a big impact on Labour party policy.

I realised how frightened I was of groups

It makes sense that a movement for social change which includes working-class, poor, owning-class and middle-class people will have more chance of success than a movement made up of just one of those sections of society. It also makes sense that groups that are cross-class in their makeup and leadership have the best chance of mobilising powerful cross-class movements based on participatory democracy.

Good training can help us unlearn not-useful habits and learn new ways of doing things that may be uncomfortable but more class-inclusive.

Direct education mixes together tools and ideas from a huge range of approaches to group work, to create something that is, among other things, much more class-inclusive.

For example, middle-class people tend to shy away from conflict. Suppressing conflict doesn’t actually help groups, and working-class people can feel excluded if there is a conflict-avoidant culture in a group.

Training for Change trainings create safe environments in which you can try out new behaviour and learn new skills. They have helped me, among other things, become much more okay with being around conflict and being in conflict with other people.

I realised a long time ago, intellectually, that conflict is a good thing, and that nonviolence as a method of social change actually relies on conflict.

For example, the civil rights movement in the US in the 1950s and 1960s was often about making visible to larger society, and to the world, the racist violence and discrimination that was operating silently in the background to deny equality to African-Americans.

The civil rights movement was often about breaking through the apparent peacefulness to show that underneath the tranquil surface was a submerged state terrorism keeping black people separate and unequal.

So many of our projects and groups could reach more of their potential, or could survive crises, if our groups had more skills in dealing with strong emotions and group conflict. I’m convinced that TfC’s direct education approach can help us here.

The last TfC direct education thing I went to was their six-day ‘How to do Transformational Work’ workshop, in Philadelphia in February. As well as learning some things about how to do transformational work with other people, I was transformed myself by the course.

I came back to the UK with much less fear of other people, and a lot lot more capacity to support groups in their learning and their decision-making.

If we want to make a revolution, we need larger movements based on much more skilful and powerful groups. We need groups that, for example, are genuinely cross-class in the way that they work, and that are delighted with conflict and the empowerment that it can bring.

If the next stage of PN can help some activist trainers to grow a bit in these directions, that will help many more activist groups develop skills in these areas.

We want to help build a living connection between skilling up facilitators and trainers and our larger ambitions for society.

There will be a Turning the Tide workshop on ‘Dealing with group conflict’ at Peace News Summer Camp. There will be a report on the April TfC trainings in the next issue.